Vids: Guardians of the Galaxy Review or How a “B” Team Became the “A” Team at the Box Office 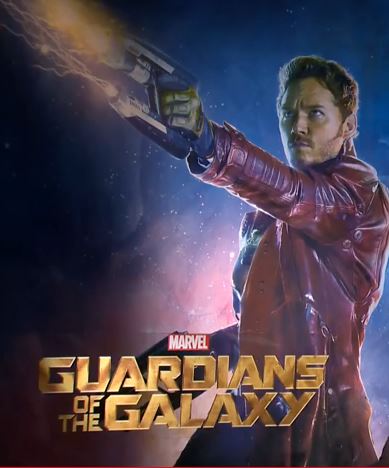 to say that I had my reservations. I have never read the comic and the thought of a talking Raccoon really made me question why Marvel would choose this comic to adapt. Seriously, what do I know? From the beginning the comic geeks I know were really stoked for this movie and now that I have seen it I have to admit my reservations were wrong and my comic geek friends were right.

Marvel’s newest theatrical foray takes us to the other side of the galaxy and introduces audiences to characters that are not very familiar to those of us who don’t spend Wednesday afternoons at the local comic shop.  There is a large portion of the general population that knows of Iron Man, Captain America and the Hulk, but how many people know Groot? This was a gamble for the studio and it appears that it paid off. I may not have known these characters before but thanks to great acting, a hilarious script and some top notch directing Guardians of the Galaxy is one of the best movies I have seen in a very long time.

The interesting thing about these characters is the fact that they are not heroes; they are, for lack of a better word, criminals. As a boy Peter Quill (Chris Pratt) was abducted from Earth and raised by a group of mercenaries known as the Ravagers. The first time we see him as an adult he is attempting to procure a mysterious orb. The scene is very reminiscent of the opening of Raiders of the Lost Ark with the exception of Quill donning headphones and dancing his way across the temple. The theft goes off without a hitch up until other interested parties show up for the orb.

Quill manages to escape from Korath (Djimon Hounsou) who we find out is working for a major baddie known as Ronan (Lee Pace).  Ronan is a powerful being with a grudge against the people of Xandar and wants to wipe them out. To do this Ronan has made a pact with an even more powerful being called Thanos (Josh Brolin) who wants the orb for his own nefarious plans. Sadly for Quill they are not the only ones chasing him. We soon find out that he has gone behind the backs of his Ravager friends, led by Yondu (Michael Rooker) who were planning on stealing the orb themselves.

After his escape with the orb, Quill heads to Xandar to sell his recent acquisition. When Quill lets it slip to his fence that Ronan also is searching for the orb the fence calls off the deal and kicks Quill out of his shop.  As Quill leaves he is confronted by Gamora (Zoe Saldana) who has been sent by Ronan to retrieve the orb and doesn’t waste any time getting it from Quill. While Gamora and Quill are tousling over the orb, Quill is also found by a pair of bounty hunters, Rocket (Bradley Cooper) and Groot (Vin Diesel), who join in the fray. Before anyone can get away all four are captured by the Nova Corps and sent to jail.

The group manages to escape from the “unescapable” prison and in the process add another criminal/hero to their group before they leave called Drax (David Bautista). Drax

is seeking revenge on Ronan who murdered his family. The group set off to sell the orb and get their major payday. Arriving on a planet called Knowhere to meet with a being known as The Collector (Benicio Del Toro). The Collector must verify that the orb is real and in doing so exposes its significanc
e. Once the true nature of the orb is exposed the team realizes that this powerful object must not fall into the wrong hands.

Now, if you want to find out how this all ends you are going to have to shell out some of your hard earned credits for a ticket. Trust me, you will not be disappointed. As I stated in the beginning I had my doubts about this movie, but I am so glad that I was wrong. Director James Gunn did an excellent job balancing humor and action, much as Joss Whedon did with The Avengers. I believe that this movie will be fun for everyone in the family.

The Guardians of the Galaxy is everything that a summer blockbuster should be. This movie has action, humor and heart. Gunn also made excellent use of the songs in this movie. The use of Rupert Holmes’ Escape (The Pina Colada Song) during the prison break is priceless.  I know I had to be annoying my neighbors with my singing along with th

e soundtrack. I guess I couldn’t fight the feeling.  I must admit that I enjoyed the movie so much that before it was over I was already trying to make plans to see it again. The premiere I attended was a 2-D version since I have rarely been impressed with 3-D but I may have to see Guardians of the Galaxy in 3-D just for the space battles.

Remember, as with all Marvel movies, you need to stay until the very end for the “stinger.” Of all the Marvel movies I have seen this was, in my opinion, the worst stinger to date. Past stingers have served to link upcoming movies and I hope that does not hold true for this one.

Guardians of the Galaxy is based on the Marvel comic has a runtime of 121 minutes and is rated PG-13 for language and violence.