Transmissions: The Dark and Gritty Premiere of Gotham is a Bit Lackadaisical 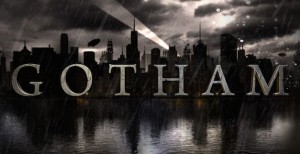 n Fox. I didn’t watch it when it first aired because frankly there was so much to watch on Monday. I did take some time to look at feedback from the premiere and it ranged from “awesome” to “underwhelming.” While I did enjoy the first episode I found it to be a drama that lacked any actual drama.

The premise of Gotham, if you didn’t know, is about the early years of Bruce Wayne (David Mazouz) and how he eventually becomes Batman. In the first episode we meet a young James Gordon (Ben McKenzie) and his partner Harvey Bullock (Donal Logue) who are investigating the murder of Thomas and Martha Wayne. You can tell from the manner in which the Waynes are murdered that it isn’t a random robbery but a professional hit. I don’t remember that from the many versions of Batman’s origin, but this may be a new approach.

As the episode progresses we are introduced to several major villains from Batman’s rogues gallery including a young Selina Kyle (Camren Bicondova), Edward Nygma(Cory Michael Smith), Oswald Cobblepot(Robin Lord Taylor) and even a young Ivy Pepper (Clare Foley). For those of you who don’t know the significance of those names they would be: Catwoman, The Riddler, The Penguin and Poison Ivy (although the name isn’t right). There may have also been a brief introduction to the Joker with a comedian (Jon Beavers) auditioning for Fish Mooney (Jada Pinkett Smith) the head of the local crime syndicate.

During their investigation the very righteous Lt. Gordon finds that the level of corruption within the Gotham City Police Department runs deep. After he and Bullock go after and kill an innocent man for the Wayne murder, Gordon vows to the young Bruce that he will find the responsible parties and bring them to justice.

I did enjoy the episode and I am sure that show has tons of potential, but there is no sense of urgency. One of the problems with most shows on American television is that the main characters are safe. You can be sure that none of the major characters in a show (unless it is a cable show) are going to die. What this means for Gotham is that none of the major character are in any danger. For example, if the little girl playing the young Catwoman loses her footing and is dangling off of a roof she will be rescued. She has to be since she grows up to be CATWOMAN! No amount of dramatic music or camera angles will lead you to believe she has a chance of dying. Sure, they will cut to commercial as her hand is slipping but guess what…she can’t die. Well she could, but that would really mess things up with the established canon.

This is the problem with doing a prequel. Gotham has a chance to be an enjoyable police procedural show set in the Batman universe but there needs to be some drama to this drama series. I will continue to give Gotham a shot since I love everything Batman. This show has great potential; let’s hope it lives up to the hype.