Puss in Boots is the fourth full-length feature in the very popular Shrek franchise. This film 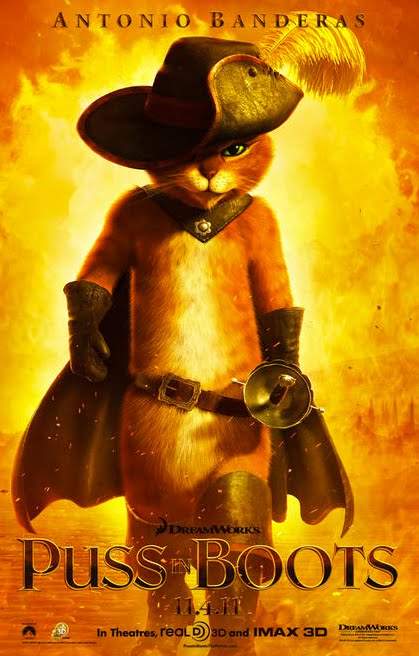 doesn’t include any ogres and instead focuses on the feline protagonist, Puss, played perfectly by Antonio Banderas. This story, set prior to the meeting between Puss and Shrek, tells the tale of the origin of the feisty sword fighting feline.

The story tells of Puss, abandoned as a kitten and raised in an orphanage in the tiny town of San Ricardo. Puss is befriended by Humpty Dumpty (Zach Galifianakis) who shares with Puss his dream of finding magic beans and climbing to the giant’s castle to steal the goose that lays the golden eggs. As the two grow up they become mischievous troublemakers with Humpty turning to a life of crime. Puss is tricked by Humpty into helping with bank robbery and before Puss can set things right the guards catch the pair. Puss escapes and is branded a wanted criminal and Humpty is sent to jail.

Puss wants nothing more than to clear his name and pay back the town for the gold that was lost during his escape. One night years later in a tavern, Puss is told of some magic beans that are in the possession of Jack and Jill, (Billy Bob Thornton and Amy Sedaris) two ruthless criminals and he sets out to steal the beans from them. His theft is thwarted by a sexy “cat” burglar called Kitty Softpaws (voiced by the equally sexy Salma Hayek). Kitty is working for Humpty who is still obsessed with finding magic beans and secretly still holding a grudge against Puss for leaving him to get captured. 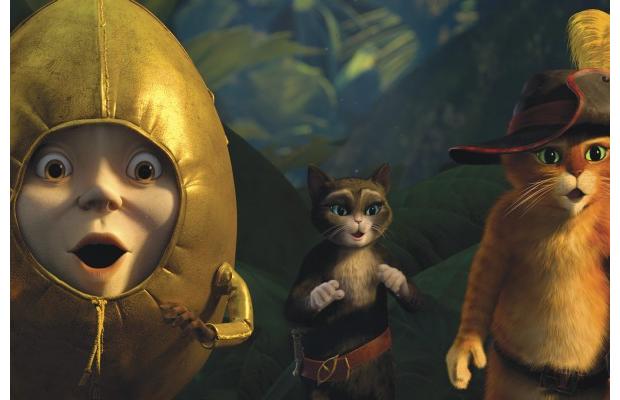 The trio eventually accomplishes their task of getting the beans and bringing forth the beanstalk which they need to ascend to the giant’s castle. They find that getting to the top is only the first stage in getting the goose they must also go up against the beast that guards the goose…

Puss in Boots may be marketed to children but it is geared towards adults. The dialog is peppered with references that should go over the heads of most children but is amusing for the parents in the audience. There is a scene after Puss is betrayed by his friends and captured by the Comandate who is voiced by Guillermo del Toro (yes that Guillermo del Toro); the Comandate is going through Puss’ belongings and comes across a bottle of catnip. Puss looks at him and says, “It is for my glaucoma.” That is not a reference that a child would get but every adult laughed. 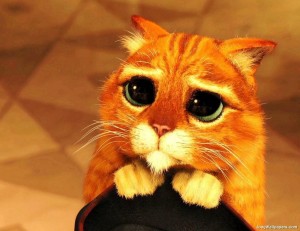 that character. The plot is predictable but it shouldn’t be complex since the target audience still dines on Happy Meals. Puss in Boots is fun and does its job entertaining the audience. For me Puss has always been the most enjoyable character in the Shrek franchise so I was looking forward to this movie and I wasn’t disappointed. The casting was tops with the biggest surprise being Guillermo del Toro who voices two characters and is executive producer.

Kids will definitely get a kick out of this movie as will cat lovers. Although not work of cinematic genius Puss in Boots is far from a disappointment; which not bad for a movie that was supposed to be a direct to video offering. The character of Puss has no problem being the center of a movie whereas the same could not be said for Donkey who is more of a sidekick. There will probably be a sequel since this one has had a strong box office. As Puss would say, “That’s some good leche.”