Astronaut Selection: Get Ready to Greet the New Year with a Smile on your Face from Time-Life Books and Geekstronomy 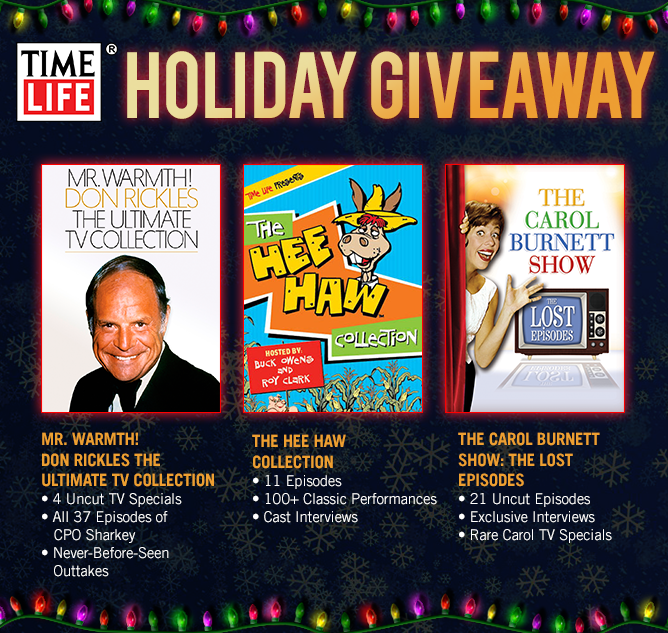 with a bunch of free stuff. Our friends over at Time Life have put together a package with some classic shows that will make you ring in 2016 with a smile. So how would you like some great shows under your tree this year?

There will be one (1) winner chosen at random for this amazing prize pack. There is no second place.

Each of these collections would be a prize on their own but the winner gets all 3.

This prize pack from Time-Life will give you hours of laughs. Check  out the details for everything in this prize pack.

Hee-Haw was the longest running comedy/variety show on television. Roy Clark and Buck Owens hosted the countrified ensemble show, pickin’ and grinnin’ and singin’ and spinnin’ with a talented cast of characters. Minnie Pearl, Grandpa Jones, Archie Campbell, and the rest of the Hee Haw gang traded knee-slappers and gut-busting one-liners in hilarious sketches including “Doc Campbell,” “PFFT! You Were Gone” and “Gordie’s General Store”—as well as the all-time favorites “Rindercella” and “Trigonometry.”

And because Hee Haw was a favorite stop for country’s greatest stars, the collection features over 100 classic performances by country stars at the peaks of their careers, like Johnny Cash, Dolly Parton, Kenny Rogers, George Jones, Waylon Jennings, Hank Williams Jr. and so many more!

The Carol Burnett Show: The Lost Episodes includes episodes that haven’t been seen on television since they first aired. For the first time on DVD, you can now own the best episodes from the groundbreaking years of Carol’s beloved variety show. You’ll see the first episode aired, the first performances of many of her famous characters, legendary guest stars, and show-stopping musical performances.

The Lost Episodes features 21 uncut episodes plus over 11 hours of bonus material on 10 DVDs. Exclusive bonus features include:

Plus, you’ll receive a collectible 40-page Guest Book with autographs from Carol’s guests, friends, and fans, production photos, and notes from Carol herself! All 21 episodes closed captioned!

The third and final set is The Ultimate Don Rickles’ Collection.  This set includes 4 uncut television specials, all 37 episodes from Don Rickles’ sitcom CPO Sharky and never before seen outtakes.

All you need to do to enter the contest is send an email with your name to timelife@geekstronomy.com  and put Holiday Giveaway in the subject line. One winner will be chosen at random. This contest is open to the residents of the United States. Limit one (1) entry per day per email address.

Geekstronomy is not responsible for lost or misdirected packages.  Winners will be notified no later than 12/18/15. If you do not respond to the email the prize will go to someone else.

Here is your chance to own some classic television which is suitable viewing for the whole family. Also take some time to check out Time-Life’s site http://timelife.com/

Good Luck and keep an eye out for more giveaways!