Gear up for exhilarating new adventures with actor, 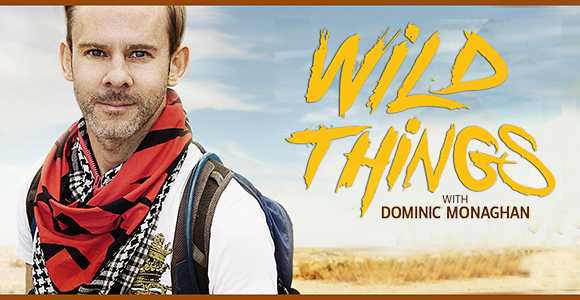 wildlife enthusiast and curious traveler Dominic Monaghan (“Lost,” “The Lord of the Rings”) as he treks through the world’s most extraordinary places in search of some of the weirdest, most majestic and dangerous animals out there. “Wild Things with Dominic Monaghan” debuts on Travel Channel beginning Wednesday, January 27 at 10:00 p.m. ET/PT with brand-new episodes. This season, comprised of 13 hour-long episodes, features new expeditions that take Monaghan diving into the emerald waters of a South Pacific paradise to face a giant crab; scouring the Peruvian Amazon for a creature that’s part fish and part stun gun; and hiking through Madagascar’s rich ecosystem to uncover a mythical lemur.

A lifelong animal lover and activist, Monaghan devotes his spare time to discovering all creatures large and small. Throughout his journeys to some of the most spectacular and remote landscapes known to man, he meets with experts who help him seek out the most exotic and rarest wildlife found only in that region. But his close encounters extend beyond nature’s critters; along roads less traveled, he stumbles into locals who introduce him to traditions, rituals and foods unique to each area.

“Next to nature and acting, travel and exploration are my biggest passions,” says Monaghan. “I am thrilled to launch ‘Wild Things’ on Travel Channel. To me, the most amazing travel experiences are rife with exploration and discovery. My fascination about the world and its creatures inspires me to travel the globe to learn more. I never know what new curiosity I’ll come upon around the corner, and that’s the best part.”

In the all-new season premiere, Monaghan heads to Mozambique in search of the world’s biggest fish: the whale shark. Weighing up to 42 tons, the elusive shark spends most of its time in the deep ocean away from human observation – but Monaghan is determined to find it. His journey begins in the bustling capital city of Maputo, an emerging tourist spot due to the country’s 1,600 miles of blue coastline. En route towards the ocean, he crosses through a wildlife reserve where local schoolchildren eagerly show him various creatures inhabiting the area. When they discover an angry rock python with a gaping wound, Monaghan springs into action to help save the animal. After visiting the coastal village of Vilanculos and joining the village festival’s annual rowboat race, Monaghan begins his underwater search. He crosses paths with an aggressive moray eel and skittish whip ray, and encounters a rarely-seen giant manta and other massive marvels.

Other locations featured this season include: Bolivia, where Monaghan pursues South America’s largest land animal; Japan, where he seeks the animal that inspired Godzilla; the Philippines, in search of the closest thing to a real dragon; Venezuela, where meat-eating insects roam the lands; and Vietnam, to face an aquatic assassin, among others.