Celebrating one of the smallest and largest superheroes to have 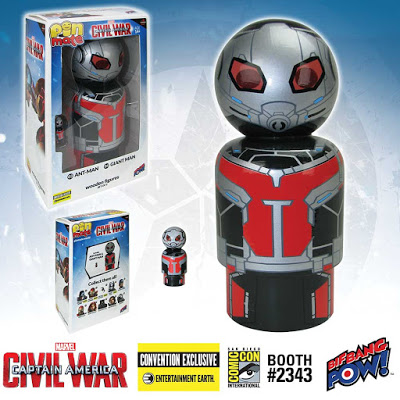 hit the big screen in Marvel’s Captain America: Civil War, we are thrilled to announce the Ant-Man and Giant Man Pin Mate Set of 2 – Convention Exclusive from Bif Bang Pow!.

Designed to highlight the movie-inspired costumes, each retro-style figure is wrapped in 360-degree, hand-painted artwork that includes some decal elements. Limited to only 1200 pieces, the personalized production of the hand-painted artwork gives each figure a one-of-a-kind authenticity that cannot be duplicated. Plus as an Entertainment Earth Convention Exclusive, each limited edition set is individually numbered with a holographic sticker – making this already highly collectible set even more collectible! Ages 14 and up.

Available for the first time on July 20, 2016 at the Entertainment Earth booth #2343 at San Diego Comic-Con, fans will have the first opportunity to grab these individually numbered and limited edition exclusives!

(*NOTE: This item will first be sold during San Diego Comic-Con 2016 at Entertainment Earth Booth #2343. If supplies remain after the show, pre-orders will be filled and shipped to you then – in August 2016.)