When Batman v Superman was released earlier this 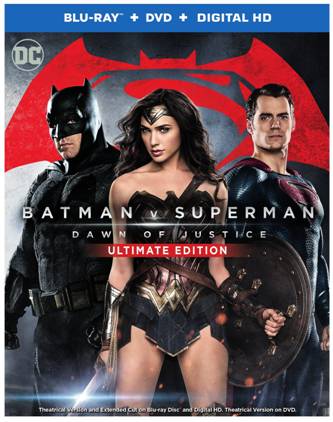 year the internet exploded with negative reviews from fans, so many that I avoided the film in theaters. I heard the story was convoluted, confusing and should be avoided at all costs but I guess you shouldn’t believe everything you read on the internet. Shock of all shocks…they could be wrong.

Now in all fairness to the hardcore fan base out there I must disclose that I don’t read the comics. I gave up collecting comics a long time ago and it wasn’t because I “grew out” of comic books, the habit just became too expensive. Even when I was reading comics I didn’t collect a lot of DC but when I did it was Batman.  I read books like “The Killing Joke,” “Batman-The Cult” and of course “The Dark Knight” to name a few. As for Superman I really wasn’t a big fan. He was too much of a “goody-goody” for me; I prefer my heroes with more of a gray side and Superman is too much of a big blue boy scout.

The plot of the movie did strike me as a mash-up of two very popular comic book story lines; The Dark Knight Returns by Frank Miller and the Death of Superman by Dan Jurgaens. The idea behind Batman v Superman is actually a pretty solid one. Since the two superheroes have ideologies that are polar opposites it would stand to reason that they would be at odds. Even in the comic universe Batman has plans in place to take down every member of the Justice League just in case they should turn evil. This can be seen in the animated feature Justice League: Doom. Deep down Batman is just not a trusting individual.

That being said I must admit that I actually enjoyed Batman v Superman. Prior to the movie coming out I was on the bandwagon bitching about casting. Personally I thought that Ben Affleck as Bruce Wayne was a bad choice. I didn’t think he could pull off the role but I was seriously wrong. Affleck did a great job as a more mature Batman. I felt he portrayed Batman/Bruce as a very damaged individual both physically and emotionally, more so than previous incarnations of the character.

The other members of the cast also do a fine job bringing their respective characters to life. Taking flight for the second time as Superman, Henry Cavill seemed more comfortable in the cape this time around. His approach to Superman is a much darker Man of Steel than Christopher Reeve. The person I felt stole the movie was Gal Gadot who portrayed Wonder Woman. The introduction of Wonder Woman in the heat of battle was one of those stand up and cheer moments that are all too rare in movies these days. There was one character that I really didn’t like and that was Jessie Eisenberg’s portrayal of Lex Luthor.  He played Lex like a nervous teenager on too much caffeine.  When Gene Hackman played Lex in the 1970’s Superman he was obviously insane but it was toned down. Kevin Spacey’s take on the character was a bit psychotic but not completely over the top. I don’t mind Jesse Eisenberg, I just feel his Luthor was more buffoon than bad ass villain.

The minor complaints aside this movie was far better than the reviews I read back in March had lead me to believe. Even amongst my friends the feelings about this movie were very polarized. There really didn’t seem to be a mid-point; the film was either liked or hated. I had wanted to see it from the moment I saw the trailer and I am glad I did so I could judge for myself. Frankly, I don’t know why there was so much hatred for this film, I enjoyed it and would rate it 6/10.

The Ultimate Edition Director’s Cut does add a little to the plot so it may be worth it for you. The extra footage is spread out through the movie and it is the addition of the new footage that adds more to the plot. If you are a fan this movie Batman v Superman: Dawn of Justice Ultimate Edition will make a great edition to your collection. I have to admit that this movie has gotten me excited for not only the upcoming Wonder Woman movie but also for Justice League movie.

Batman v Superman: Dawn of Justice is available as:

Batman v Superman: Dawn of Justice the Ultimate Edition is available; now get yours today!