Equipment: Want to Own a Piece of SYFY History? Big Auction for Props from some of Your Favorite SYFY Shows Including Warehouse 13. Battlestar Galactica, Caprica and Eureka to Name a Few

SYFY fans will be able to take home 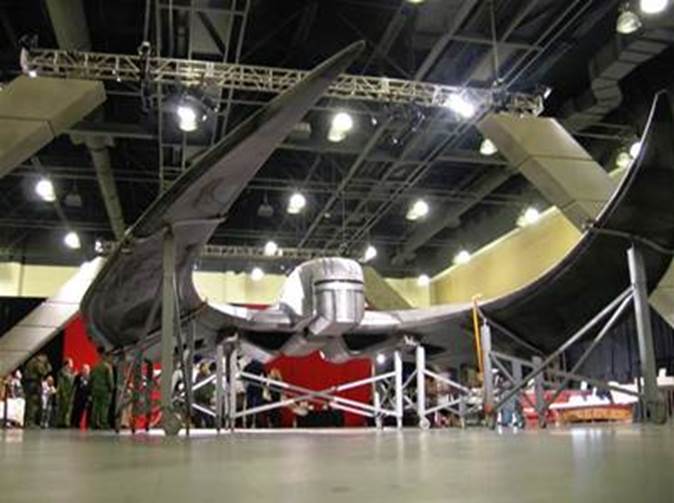 impressive memorabilia used on several of their favorite futuristic shows: Battlestar Galactica Warehouse 13, 12 Monkeys, Dominion, Eureka, and Caprica. Enthusiasts can get their hands-on props, set decorations and other memorabilia from the hit series by bidding on Hollywood’s auction site, ScreenBid (www.screenbid).

The auction will include over 600 monumental collectibles straight from the sets of each of the series and used by some of their favorite characters. The iconic Cylon Raider is up for grabs for Battlestar Galactica fans as the primary fighter spacecraft will be featured during the ScreenBid auction. The symbolic main attack fighter, best known to viewers for its participation in the destruction of the Twelve Colonies and later actions. Warehouse 13 props include multiple hero artifacts, steampunk devices and the seminal time machine that was used in the classic series. The original machine was used in several episodes including “Where and When”. In Helena (HG) Well’s words “the time machine is essentially a temporal consciousness transfer engine.” It has a rather psychometric effect, allowing the user to inhabit the body of someone in the past, specifically for 22 hours and 19 minutes. Additional items that will be available in the SYFY auction including: Hannah’s Baby Blanket (12 Monkeys), Biohazard Warning Sign (Eureka), Furiad Sword (Dominion) and the Planet of Tauron Pin (Caprica). All merchandise will be sold with an official Studio Certificate of Authenticity.

“The props included in the SYFY auction are monumental objects that appeared periodically throughout the success of all 6 shows.” Says Jeffrey Dash, CEO of Screenbid. The memorabilia is literally and figuratively going to be out of this world!”

In addition to bidding online, fanatics are also able to shop the auction at the new twenty thousand square foot Screenbid Center located on Hollywood Boulevard from 12:00pm-8:00pm.

ABOUT SCREENBID:
ScreenBid is the world’s best source for certified authentic, screen-used Hollywood memorabilia and collectibles. ScreenBid, has hosted the official auctions for Breaking Bad, True Blood, Sons of Anarchy, Boardwalk Empire, Ghostbusters, Mad Men, New Girl, Bates Motel, Grimm, 30 Rock, The Office and connects fans directly with their favorite movies and TV shows by making available the best props, wardrobe pieces and set decoration from the big and small screens. Bidding is easy, and every ScreenBid item comes with a studio certificate of authenticity.