I had been a bit apprehensive about watching 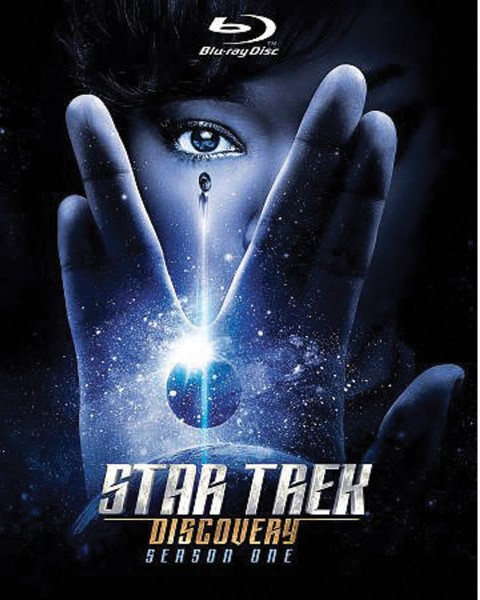 the latest incarnation of Star Trek, Star Trek: Discovery; a new Trek is a prequel set 10 years before Kirk commanded the Enterprise. Two of the things that made me question the direction of this new series were the introduction of a new type of drive called a Spore Drive and the introduction of Spock’s adoptive sister. Neither of these things have ever been spoken of before and yet they suddenly appeared.

Before I continue with what I don’t like about Star Trek: Discovery I need to talk about what I did enjoy from the first season. First off the show is beautifully shot. I love how it really belongs on the big screen. The sets are incredible. Yes, I know that it looks more advanced than Kirk’s Enterprise but we have come a long way from the original cardboard sets. Even the NX-01 looked more advanced and it was supposed to take place 100 years before Kirk commanded the Enterprise. This is understandable and forgivable because television has advanced a bit since 1966.

Next has to be the props. I totally love the look of the phaser, communicator and tricorder. Both the phaser and the communicator pay homage to the original props without being so advanced looking. The phaser looks like the evolution between Pike’s laser pistol from the Cage and the phasers of the Original Series era. The communicator reminds me a bit of the communicators from Wrath of Khan. The tricorders are a bit small compared to what we saw on the Original series but it does fit in with the continuity established in Star Trek Enterprise. Speaking of which, the phaser rifle is almost identical to the rifles used by the M.A.C.O.s on Enterprise. I really love that Star Trek: Discovery is paying homage to that under-rated show.

Another thing that I am impressed with is the acting. I love the cast. I loved Sonequa Martin-Green on The Walking Dead and she is doing (pardon the pun) a stellar job as Michael Burnham. When Star Trek first aired in 1966 the thought of a woman in command was unheard of let alone a woman of color. Women seemed more like set dressing on the Original series; even Uhura (Nichelle Nichols) had very few moments where her character did more than open hailing frequencies. Martin-Green really kicks ass and I think that makes her a great role model for young girls.

Another stand out has to be Doug Jones. Hidden behind the make-up of the Kelpien, Saru, Jones really brings this alien to life. Kelpiens are a race that can sense danger and the coming of death so they prefer to avoid dangerous situations. When I initially read the description of what a Kelpien was I didn’t think I would like Saru but I was wrong. Saru is probably one of my favorite characters on Discovery. I just want to know how he can walk in those hoof boots. He deserves an Emmy for that alone.

One character I didn’t like at first had to be Paul Stamets, played by Anthony Rapp. Stamets is the type of person that thinks he knows more than everyone else, think Sheldon from The Big Bang Theory, and it is just annoying. As the first season progressed the character became more likeable. There was one scene between Stamets and Dr. Hugh Culber (Wilson Cruz) that moved me to tears. When Stamets is in the coma/dream state and he says goodbye to his partner for the last time I did get emotional. Maybe that was the turning point for me and the character. I am curious what season 2 has planned for him.

I believe I have touched on all the important parts that I enjoyed in Star Trek: Discovery, now I have to address the things I didn’t like. To begin with, the names of each of the Star Trek series tend to get shortened. Star Trek (1966) is either just called Star Trek or The Original Series, Star Trek: The Next Generation became simply TNG, Star Trek: Deep Space Nine became DS9 and Star Trek: Voyager became just Voyager. Now we have Star Trek: Discovery which has quickly been shortened to STD. Did someone not think this through? I actually don’t know what is worse, referring to Discovery as STD or as Disco. I know it is very nitpicky to complain the show’s title but I think STD is stupid and shows a lack of forethought. I am aware that you can refer to the show as Discovery but that makes me think of either The Discovery Channel or the space shuttle of the same name.

Speaking of the Discovery, I am not a fan of the ship’s design. There is some debate whether or not the design is an old rejected design or just an unused one; I lean towards the theory of a rejected design. Although I can’t find it on line, I distinctly remember reading that Gene Roddenberry rejected this concept. I could be wrong. Regardless of what the actual truth is I personally think that the Discovery is a hideous design.

Sticking with the ship itself, let’s talk about the spore drive. This drive works more along the lines of folding space like in Frank Hurbert’s Dune. The navigators in Dune use the gas from the spice to help them fly their ships. The spore drive concept seems to owe a lot to Dune. If something like this was developed in the Star Trek universe between Archer’s Enterprise and Kirk’s Enterprise why hasn’t it ever been mentioned before? Even if for some reason the spore drive propulsion is abandoned why would everyone would forget that it existed? It doesn’t make sense. Speaking of not making sense I hate how the saucer section spins around and then the ship does a flip and vanishes.

Another continuity issue would be Michael Burnham as Spock’s adoptive sister. Spock doesn’t have a sister, adopted or otherwise. Once before someone had the bright idea to give Spock a brother and we all agree how stupid that continuity error was. The only possible reasoning behind this decision had to be that they wanted a link to the Original series. Just wait until we find out that Kirk’s father was an Andorian.

Speaking of continuity issues let’s talk about Mudd. When we first meet Harcourt Fenton Mudd (Roger C. Carmel) in the Original series episode, “Mudd’s Women” he is depicted as a con-man but ruthless was not a word that could be used to describe him. Well, on Star Trek: Discovery when we first meet Harry Mudd (Rainn Wilson) he is a prisoner of the Klingons. During the course of the episode we learn that Mudd is spying on his fellow prisoners and giving the info to their captors. This is well within character; the Harry Mudd we know and tolerate from the Original Series would have no problem with screwing over another human being to save his skin. The problem is that the writers of Discovery have thrown out who and what Harry Mudd was and turned him into a killer. The original Mudd might have gotten someone into a situation that may lead to their death but I couldn’t imagine Mudd pulling the trigger himself.

The creators of Star Trek: Discovery seem to be catering to the diminished attention spans of viewers, replacing the more cerebral story lines with violence. I think this is why they popped over to the mirror universe. Don’t get me wrong, I like fight scenes and ship battles but I think some of this violence is for shock value. The show is trying to draw in more fans and in this era of fast paced video games they feel the need to put in a lot of flash. It has to be difficult to make a Star Trek series in a Star Wars environment.

One of the biggest issues I am having with Star Trek: Discovery is: Klingons are not purple! Some of us grew up with Klingons that looked almost human. TNG brought us Klingons with ridged foreheads and pointed teeth. Finally Star Trek: Enterprise answered the age old question about why Klingons changed. Since Discovery is set 100 years after Enterprise, there should be Klingon/human hybrids around, not purple Klingons. I really do not understand what they are thinking with this one.

Call me nitpicky but another continuity error was in the Mirror Universe episodes. The Agony Booths were repeatedly referred to as Agonizers. Agonizers are small hand held devices that when pressed against another being inflicts severe pain; Agony Booths are exactly what the name suggests, a booth. I know that there are other things I can pick on but I have fixated on this word. I guess it bothers me because these people are making a show based on a well-known series and pitching continuity out the window.

Star Trek: Discovery Season 1 is available on Blu-ray and DVD. The four disc set retails for $50.99 USD and contains the entire first season as well bonus features. These bonus features are:

I think I have complained enough about this particular STD. I have to say I don’t completely dislike this show. I am even enjoying Jeff Russo’s soundtrack (I have it in my car right now). Maybe I need to give the second season a go before I rant on any longer. For right now, Star Trek: Discovery has some merit but it isn’t your father’s Star Trek, hell, it isn’t even mine.

Season 2 of Star Trek: Discovery premieres on CBS All Access on January 15