So I am finally getting around to posting the review for this movie. Valerie worked hard 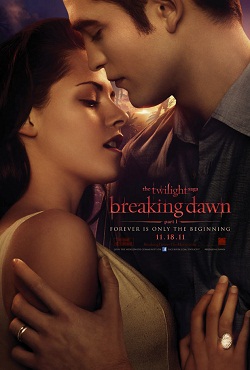 getting it to you, so I apologize for the delay. I was going to write a conterpoint review of Breaking Dawn but I decided against it…for now.

I did some research on the director of this movie, Bill Condon and found that he did not direct the other Twilight movies. He directed Dreamgirls, Kinsey, Gods and Monsters and quite a few TV movies. He wrote a letter to Twilight Fans on his Facebook page. I liked this part of the letter as it shows he understands the fans as much as anyone could:
“The wonderful world that Stephenie has created has obviously struck a chord with you, and I don’t think it’s difficult to see why. For me, her characters are simultaneously timeless, yet very modern. Rooted in a beautiful, real landscape with a great sense of place, Bella, Edward, Jacob, and the rest of the Forks/La Push menagerie, experience emotions that are primal, and universal: desire, despair, jealousy – and it all comes to fruition in BREAKING DAWN. This is a final chapter in the best sense; not just wide in scope and scale, but emotionally charged and intense throughout.” (http://popwatch.ew.com/2010/05/02/breaking-dawn-bill-condon-letter-to-fans/)

Let me start this review with a disclaimer: I like watching movies on DVD, rather than in the theater, so it is possible I will enjoy the movie more when it hits DVD. I really do not enjoy strangers talking, girls giggling or loud background noise. So on to the review. Breaking Dawn was not the best movie in the Twilight Saga. It has very good parts but my biggest problem was that if you did not read the books (which I did but my friend did not), you would miss a lot. 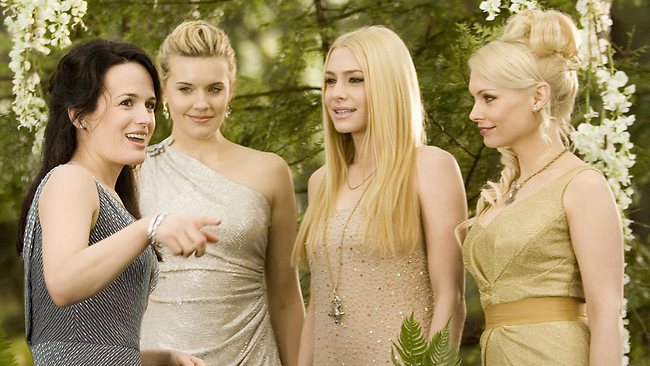 Bella and Edward get married in this movie. Beautiful dress, beautiful decorations, and crying guests are all there. There are also vampires who should have gone to different costume and make-up people. The make-up on Tanya’s sister Irina (the woman in the middle) was horrible! They all had beautiful golden contacts but her makeup and contacts seemed off. It reminded me of Carlisle’s makeup in the first movie which was absolutely atrocious.

They added some very funny bits to the wedding reception, Charlie threatening Edward while drunk, Jessica commenting that Edward of course did not choose the captain of the volleyball team (her) and Renee, Bella’s mother singing a lullaby to Bella.
On the honeymoon, Bella was the nervous bride, as her vampire lover had agreed to try to have sex when she was still human. She played the part very well, I was definitely impressed because there are moments that Kristen Stewart could be better, but she did good, recalling the part in the book to my mind clearly. When Bella realizes that Edward plans to have Carlisle “take care of it”, she calls on Rosalie to help her. Rosalie has always wanted a child so she becomes Bella’s bodyguard.

In the books, the wolves never actually attack the Cullens to kill Bella. In the movie they do. I am not sure why the writers felt the need to change that part of the story. It made the wolves look more violent than they are portrayed in the book. I am guessing they did it to make more action for the movie. I am guessing most people who read the books were not thrilled about the wolves looking violent.

One part I expected to see more of was the antagonistic relationship between Rosalie and Jacob that took place in the book. They constantly harass each other in the book and it is very humorous. But once again, they do have to cut things out of the movies and this was one of the things deemed not important enough for the movie. I am sure will be in the second part.

Bella’s child grew quickly; I think she may have been pregnant for something like 2 months. The baby was growing so fast that it broke her ribs. She was also not getting nourishment. They decided the baby wanted blood, and I do believe Bella drinking blood 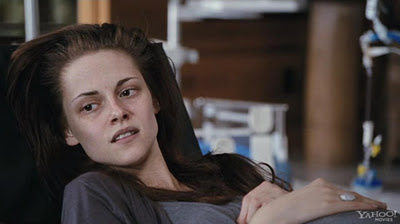 may have been one of the worst parts of the movie. They really could have left out the nasty sounds of the birth scene. I didn’t need to hear the sound of Edward biting Bella. It was a grotesque scene. I was very impressed with what happened after he injected her with his venom after her heart stopped. The baby had reduced Bella to skin and bones.

The transformation to her becoming a vampire was flawless. They showed her hair transforming, her body filling out again, and her skin becoming perfect.
The writers needed to explain the “imprinting” of the wolves better. My friend, James, says the imprinting part just seems creepy but that is because he has never read the books. In the books, Bella is also freaked out about it until Jacob explains it to her. Once the male sees the female that he is destined to be with, everything else falls away. He instantly becomes whatever she needs at that point in her life. If she is a child, he will be her protector, as she grows, her brother, and when she is of age, they will be together. It does come across creepy if you look at it through today’s worlds eyes. But when you look at it from a fantasy perspective, they are meant to be with each other. Every woman has dreamt that there is one man who she is destined to be with. The wolves find this and it is felt by the woman too. They will be together forever in any way they need. It is not sexual as everything seems to be in our world today. This person they have found will fulfill their every want, wish and need for their whole life. The reason people think this is creepy, is because wolves who are around 17 imprint on little girls. But they spend all of their time babysitting, protecting and being big brothers to these girls, who are a part of this pack. There is nothing sexual about it.

Once Bella had the baby, Renesmee (a combination of Bella’s mom’s name, Renee and Edward’s “mom’s” name Esme), Jacob decided he was going to kill her. As soon as he laid eyes on the baby, he imprinted on her. In the book, they explain this as the reason he could not stay away from Bella while she was pregnant because he was tied to her. This saved Bella and Renesmee from being killed by the wolves because one of the pack’s absolute laws it that they cannot kill someone who a wolf has imprinted on, as it would destroy the wolf.
So, Bella and Edward are married. Bella has given birth to a half vampire/half human child. Jacob has imprinted on Renesmee. Bella is now a vampire. And now we await Part 2. There are a lot of new characters in Part 2. They are vampires that come to help the Cullens when the Volturi come to fight. And I don’t know if James is allowed to go with me to the next one. LOL 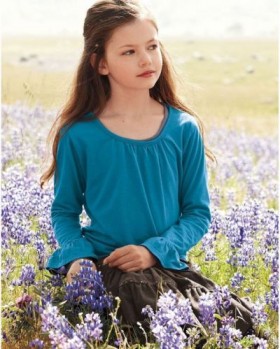 Nine year old, Mackenzie Foy will be playing Renesmee in Breaking Dawn Part 2. I am looking forward to seeing her in the movie.  (Photo courtesy of http://www.readingteen.net/2010/10/breaking-dawn-movie-news-and-official.html)