Vids: Justice League vs. The Fatal Five Animated Feature Available on Blu-ray Today from Warner Home Entertainment…We Also have a Clip to Share 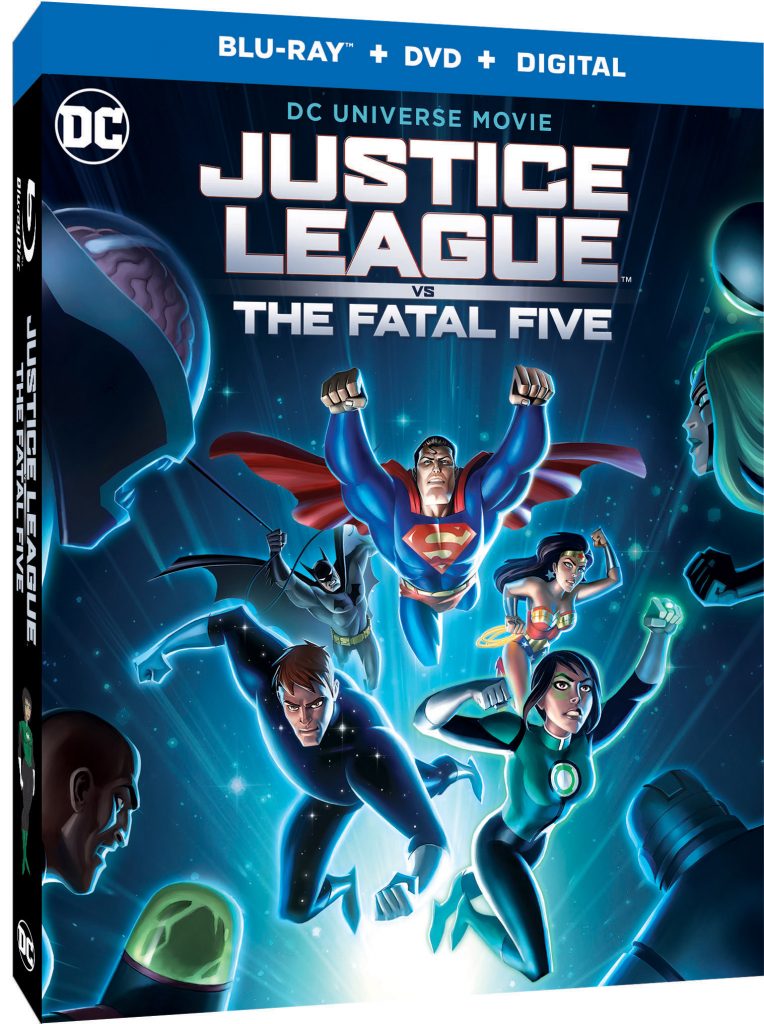 ent, Justice League vs. The Fatal Five arrives on Blu-ray today! The animated DC hero movies are never disappointing and I am pretty excited about this release. In this movie the Justice League goes up again villains from the future who have set their sights on destroying Metropolis.

Justice League vs. The Fatal Five finds the Earth’s future hanging in the balance when the Justice League faces a powerful new threat – the Fatal Five. Superman, Batman and Wonder Woman seek answers as the time-traveling trio of Mano, Persuader and Tharok terrorize Metropolis in search of budding Green Lantern, Jessica Cruz – whom they need to free remaining Fatal Five members Emerald Empress and Validus in order to carry out their sinister plan. But the Justice League discover an ally from another time in the peculiar Star Boy – brimming with volatile power, could he be the key to thwarting the Fatal Five? An epic battle against ultimate evil awaits!

The Special Features Include:
Battling the Invisible Menace (Featurette)– This featurette will explore the nuanced hero as many characters must deal with the everyday feelings of anxiety, depression, and other incapacitating emotions that we all must battle and overcome.

Justice League vs. Fatal Five: Unity of Hero (Featurette) – A look at how the pantheon of DC heroes has never been more diverse and inclusive, as writers and artists break boundaries and smash stereotypes.

Sneak Peek Revisited: A Preview of Justice League Dark – John Constantine leads a group of misfit characters that use magic to vanquish their opponents. This is the dark version of The Justice League taking on the malevolent forces that go beyond our plane of existence.

Sneak Peek Revisited: A Preview of Justice League vs. Teen Titans – A glimpse into the characters known as the Teen Titans.

From the DC Vault: Justice League Unlimited, “Far From Home”

From the DC Vault: Legion of Superheroes, “Man of Tomorrow”

Justice League vs. The Fatal Five will also be available on Movies Anywhere. Using the free Movies Anywhere app and website, consumers can access all their eligible movies by connecting their Movies Anywhere account with their participating digital retailer accounts.

Digital movies or TV episodes allow fans to watch a digital version of their movie or TV show anywhere, on their favorite devices. Digital movies or TV episodes are included with the purchase of specially marked Blu-ray discs. With digital, consumers are able to instantly stream and download movies and TV shows to TVs, computers, tablets and smartphones through retail services. For more information on compatible devices and services go to wb.com/digitalmoviefaq. Consult a digital retailer for details and requirements and for a list of digital-compatible devices.

About DC
Home to iconic brands DC (Superman, Batman, Green Lantern, Wonder Woman, The Flash), DC Vertigo (Sandman, Fables) and MAD, DC is the creative division charged with strategically integrating across Warner Bros. and WarnerMedia. DC works in concert with many key Warner Bros. divisions to unleash its stories and characters across all media, including but not limited to film, television, consumer products, home entertainment, and interactive games. Publishing thousands of comic books, graphic novels and magazines each year, DC is one of the largest English-language publishers of comics in the world.

JUSTICE LEAGUE and all related characters and elements are trademarks of and © DC Comics. © 2019 Warner Bros. Entertainment Inc.