Batman: Hush is based on the storyline 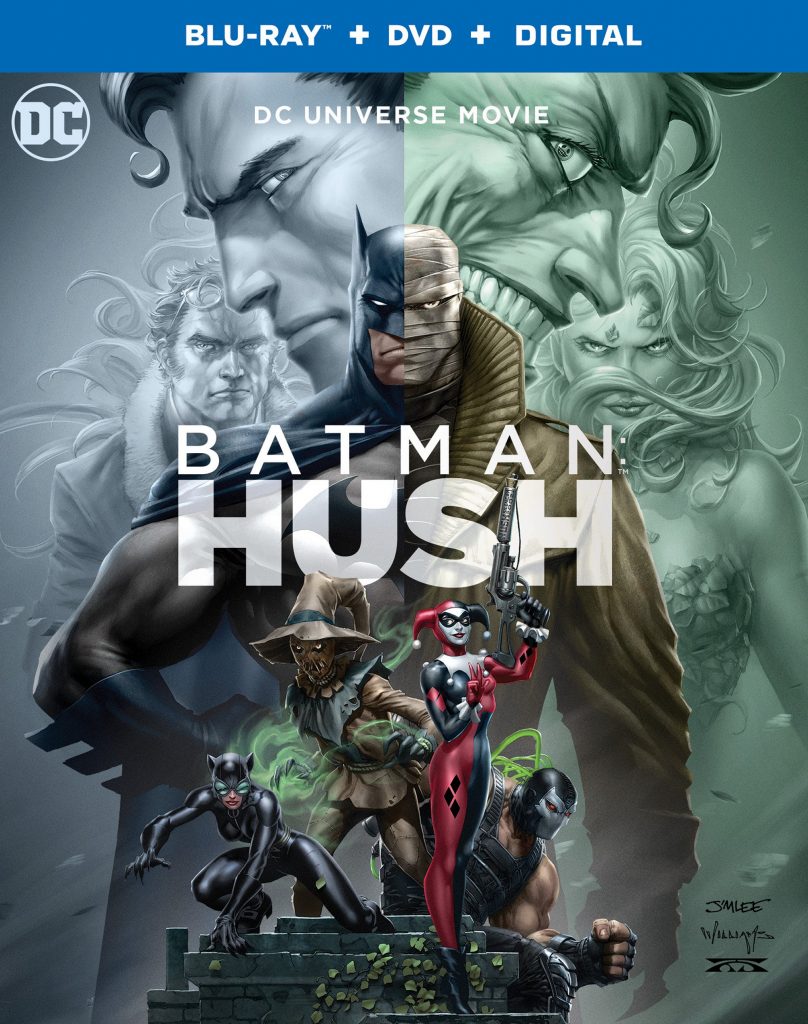 from 2002-2003 that ran for 12 issues in the Batman comic, issues 608-619 written by Jeph Loeb with art by Jim Lee. The story is filled with appearances from several Batman baddies including Catwoman and Poison Ivy as well as an appearance from Superman. The main plot revolves around a new villain referred to as Hush who is using Batman’s enemies to do his bidding.

I am a big fan of the Warner Animated movies and have always felt that the animated DC heroes work better than the live action movies. Batman: Hush is a great addition to the Warner library. Having never read the source material I can’t say if the movie is a good adaptation from the comics. What I can say is that the movie was well done with a strong cast and great animation. Everything I have come to expect from Warner Brothers.

I think that Batman: Hush, although a good movie, could have worked as a mini-series or some other long term project. Since the movie only has a runtime of 82 minutes I felt the story was wrapped up too quickly. All in all I would say that Batman; Hush is a solid 4 out of 5 stars. Even the casual Batman fan will enjoy this one.

Batman: Love in Time of War (Featurette)– Dangerous. Seductive. Villain. Hero. This is the story of Selina Kyle and the relationship she has forged with the world’s greatest detective.

From the DC Vault –Batman and Robin: Catwalk

The Sgt. Rock animated short quite enjoyable. I liked the mix of horror with World War II as the backdrop. The use of what we think of as the classic monsters, Wolf-Man, Frankenstein and Dracula (though not exactly this characters) the story tellers didn’t have to take time to explain what their powers were. For example when you see a vampire you immediately know more or less what a vampire is like and you don’t need it explained to you. The same goes for the other creatures. I could have watched a full length Sgt. Rock story and who knows one day we just might.

DIGITAL DISTRIBUTION ELEMENTS
On July 20, 2019, Batman: Hush was made available to own in high definition and standard definition from select digital retailers including Amazon, FandangoNOW, iTunes, PlayStation, Vudu, Xbox and others. On August 6, 2019, Batman: Hush was made available digitally on Video On Demand services from cable and satellite providers, and on select gaming consoles.

ABOUT MOVIES ANYWHERE
Movies Anywhere is a digital movie platform that enables movie fans to discover, access, and watch their favorite digital movies in one place. Movies Anywhere brings together a library of nearly 7,500 digital movies from Sony Pictures, Twentieth Century Fox Film, The Walt Disney Studios (including Disney, Pixar, Marvel Studios and Lucasfilm), Universal Pictures (including DreamWorks and Illumination Entertainment) and Warner Bros., and will continue to expand the consumer experience as more content providers, digital retailers and platforms are added. By connecting participating digital retailers that include Amazon Prime Video, FandangoNOW, Google Play, iTunes and Vudu, movie fans can now bring together their digital movie collections (whether purchased or redeemed) in one place and enjoy them from the comfort of their living rooms, and across multiple devices and platforms, including Amazon Fire devices; Android devices and Android TV; Apple TV; Chromecast; iPhone, iPad and iPod touch; Roku® devices and popular browsers. Movie fans can also redeem digital codes found in eligible Blu-ray and DVD disc packages from participating studios and enjoy them through Movies Anywhere. Movies Anywhere – your movies, together at last.

ABOUT DIGITAL
Digital movies or TV episodes allow fans to watch a digital version of their movie or TV show anywhere, on their favorite devices. Digital movies or TV episodes are included with the purchase of specially marked Blu-ray discs. With digital, consumers are able to instantly stream and download movies and TV shows to TVs, computers, tablets and smartphones through retail services. For more information on compatible devices and services go to wb.com/digitalmoviefaq. Consult a digital retailer for details and requirements and for a list of digital-compatible devices.

PG-13 for violence and action, suggestive material, and language

BATMAN and all related characters and elements are trademarks of and © DC Comics. © 2019 Warner Bros. Entertainment Inc.

Big thank you to Warner Brothers for supplying Batman: Hush for review.