When the forces of evil unite from across time and dimensi 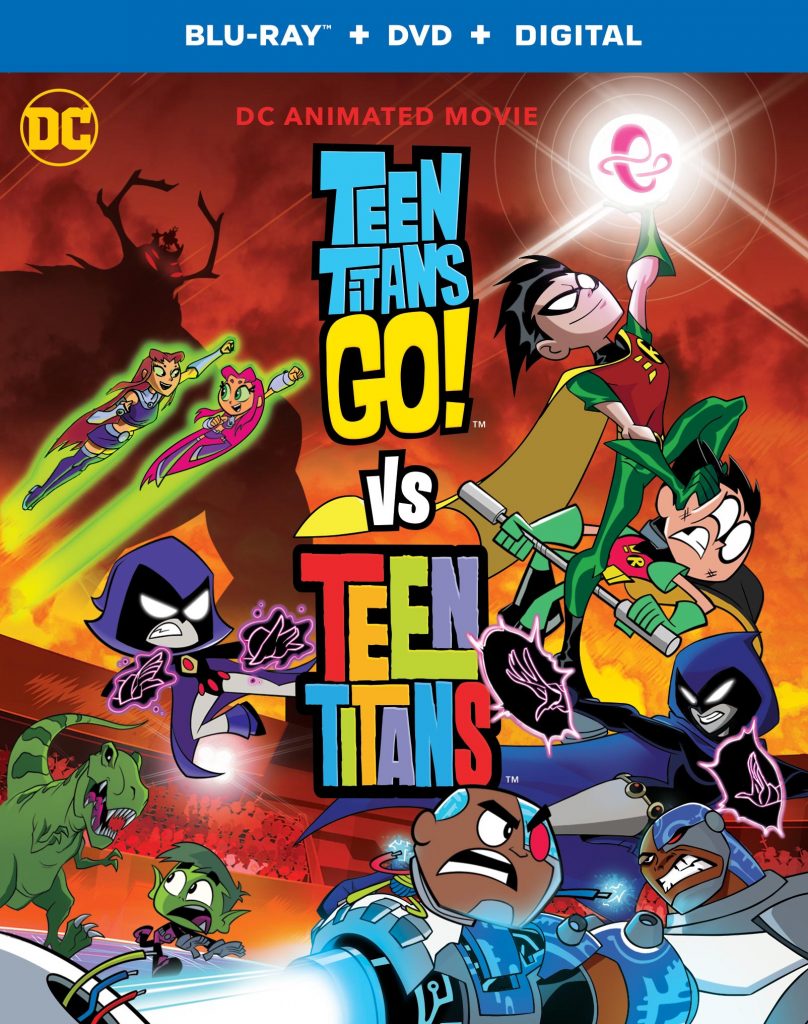 In Teen Titans Go! Vs. Teen Titans, the comedic modern-day quintet takes on their 2003 counterparts when villains from each of their worlds join forces to pit the two Titan teams against each other. They’ll need to set aside their differences and work together to combat Trigon, Hexagon, Santa Claus (that’s right, Santa!) and time itself in order to save the universe.

Teen Titans Go! “Legendary Sandwich” – Raven sends the Titans on a quest to find ingredients for a magical sandwich.

Teen Titans Go! “Mr. Butt” – Blackfire pays a surprise visit to her sister Starfire. The other Titans think Blackfire is playing another trick, but Starfire is certain this time Blackfire is serious about reviving their sisterly love.

Teen Titans Go! “Cat’s Fancy” – Robin decides to become a cat so that Starfire will finally love him.

Teen Titans Go! “Shrimps and Prime Rib” – The Titans try to remember how to be superheroes and stop The Brain.

Teen Titans Go! “The Scoop” – When Starfire becomes obsessed with an ice cream scoop, the others try to teach her that inanimate objects can’t replace people.

Teen Titans Go! “Chicken in the Cradle” – In the Season Five premiere, Beast Boy neglects his responsibilities leaving the other Titans to raise his baby chick.

Teen Titans, “Final Exam” – Slade hires the newest graduates of the H.I.V.E. to take on the Teen Titans.

Teen Titans, “How Long is Forever” – Starfire is accidentally sucked into a wormhole that sends her 20 years into the future.

Teen Titans, “Deception” – When the Titans find out Brother Blood has an academy for young super villains, Cyborg goes undercover to find out more about the operation.

Sing-along ( Feature ) – Join in and sing-along with “We are Teen Titans” and the “Worlogog” tunes featuring Cyborg, never before on video!

ABOUT MOVIES ANYWHERE
Movies Anywhere is a digital movie platform that enables movie fans to discover, access, and watch their favorite digital movies in one place. Movies Anywhere brings together a library of nearly 7,500 digital movies from Sony Pictures, Twentieth Century Fox Film, The Walt Disney Studios (including Disney, Pixar, Marvel Studios and Lucasfilm), Universal Pictures (including DreamWorks and Illumination Entertainment) and Warner Bros., and will continue to expand the consumer experience as more content providers, digital retailers and platforms are added. By connecting participating digital retailers that include Amazon Prime Video, FandangoNOW, Google Play, iTunes and Vudu, movie fans can now bring together their digital movie collections (whether purchased or redeemed) in one place and enjoy them from the comfort of their living rooms, and across multiple devices and platforms, including Amazon Fire devices; Android devices and Android TV; Apple TV; Chromecast; iPhone, iPad and iPod touch; Roku® devices and popular browsers. Movie fans can also redeem digital codes found in eligible Blu-ray and DVD disc packages from participating studios and enjoy them through Movies Anywhere. Movies Anywhere – your movies, together at last.

ABOUT DIGITAL
Digital movies or TV episodes allow fans to watch a digital version of their movie or TV show anywhere, on their favorite devices. Digital movies or TV episodes are included with the purchase of specially marked Blu-ray discs. With digital, consumers are able to instantly stream and download movies and TV shows to TVs, computers, tablets and smartphones through retail services. For more information on compatible devices and services go to wb.com/digitalmoviefaq. Consult a digital retailer for details and requirements and for a list of digital-compatible devices.

TEEN TITANS and all related characters and elements are trademarks of and © DC Comics. © 2019 Warner Bros. Entertainment Inc.