Vids: Join Time Life for a Wild Ride Through the Spectacular 70’s with TV’s Most Colorful Couple with I Got You Babe: The Best of Sonny & Cher

When Salvatore “Sonny” Bono and 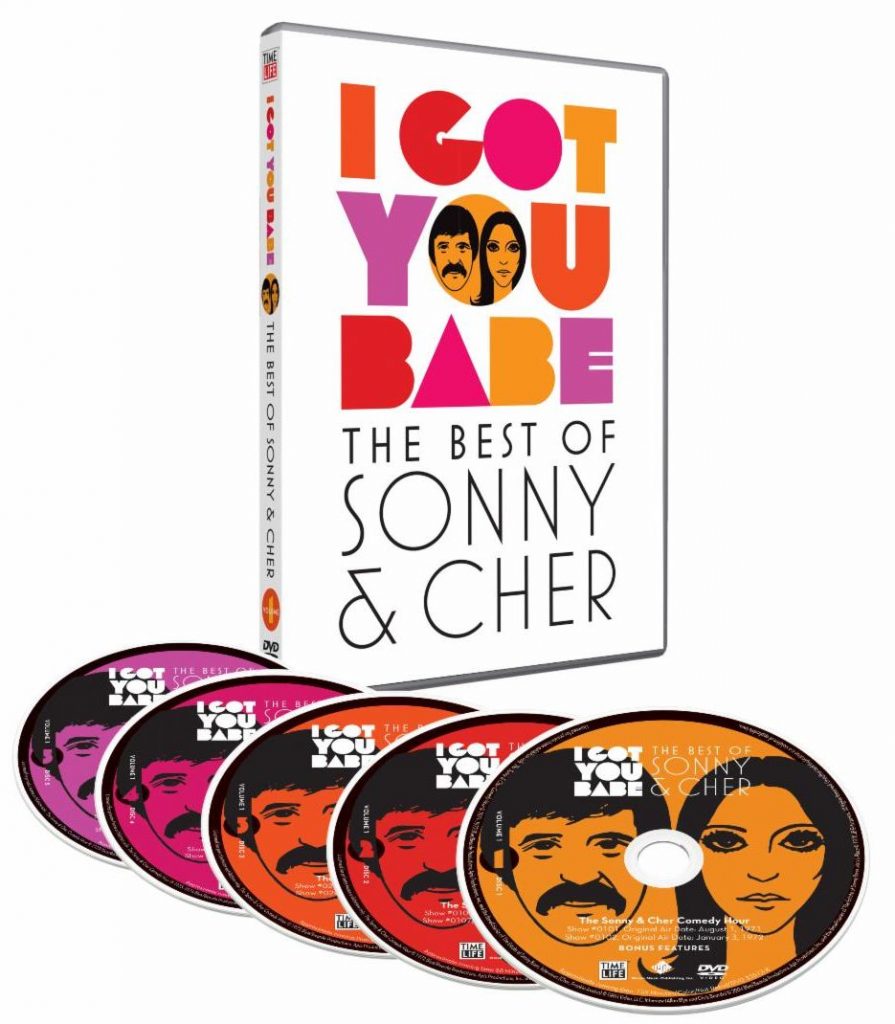 Cherilyn “Cher” Sarkisian came together it was undeniably magical. America first knew them as the duo behind the classic hit “I Got You Babe,” and their popularity exploded with the ’70s smash variety show The Sonny & Cher Comedy Hour. The perfect match on stage and off, millions of fans tuned in each week to watch the sparks fly and see what Cher was (or wasn’t!) wearing and the show quickly became essential viewing. Now, this February, the TV DVD archivists at Time Life open wide the Classic TV vaults for a very special collection of one of the ’70s hippest, goofiest and most fondly remembered TV variety programs with I GOT YOU BABE: THE BEST OF SONNY & CHER.

After finding chart-topping success in the late 60s, Sonny and Cher found themselves performing in nightclubs in 1970 when they were “discovered” by CBS entertainment chief Fred Silverman, who decided they had great potential for a weekly variety series. The Sonny & Cher Comedy Hour premiered on August 1, 1971 as a summer replacement, but quickly reached the top 20, becoming a Wednesday night draw for the Network and cementing Sonny and Cher as one of Hollywood’s most beloved couples.

Containing 10 hilarious, never-before-released episodes of The Sonny & Cher Comedy Hour (1971-74), which feature the musical duo performing their hit songs and side-splitting sketches with must-see guest stars, I GOT YOU BABE brings home audiences back to the beginning with the pilot episode, firsts of many classic sketches — just naughty enough for nighttime! – Cher’s incredible Bob Mackie-designed costumes and the chemistry that started it all. Also, tune in for an incredible line-up of guest stars including Dick Clark, Jerry Lewis, Jim Nabors, Joe Namath, The Righteous Brothers, Dinah Shore, Carroll O’Connor, Art Carney, Chuck Berry, The Supremes and many more!

I GOT YOU BABE: THE BEST OF SONNY & CHER also features exclusive extras including:
Sonny & Cher’s pilot, an appearance on The Barbara McNair Show (Original Air Date: February 15, 1970)
Jerry Blavat’s 1970 interview of the duo on “Jerry’s Place” featuring an impromptu performance of “I Got You Babe”
Interviews with Frankie Avalon, producers Allan Blye and Chris Bearde, and Cher herself!
Day and date, Time Life will also bring The Sonny & Cher Comedy Hour to leading digital platforms for the very first time! Available for download on Amazon, iTunes, and Google Play will be 10 hand-picked episodes of the fan-favorite TV Variety show, assuring that the fondly-remembered series lives on for a new generation of classic TV lovers.

Time Life is one of the world’s pre-eminent creators and direct marketers of unique music and video/DVD products, specializing in distinctive multi-media collections that evoke memories of yesterday, capture the spirit of today, and can be enjoyed for a lifetime. TIME LIFE and the TIME LIFE logo are registered trademarks of Time Warner Inc. and affiliated companies used under license by Direct Holdings Americas Inc., which is not affiliated with Time Warner Inc. or Time Inc.