Being trapped indoors has allowed for catching 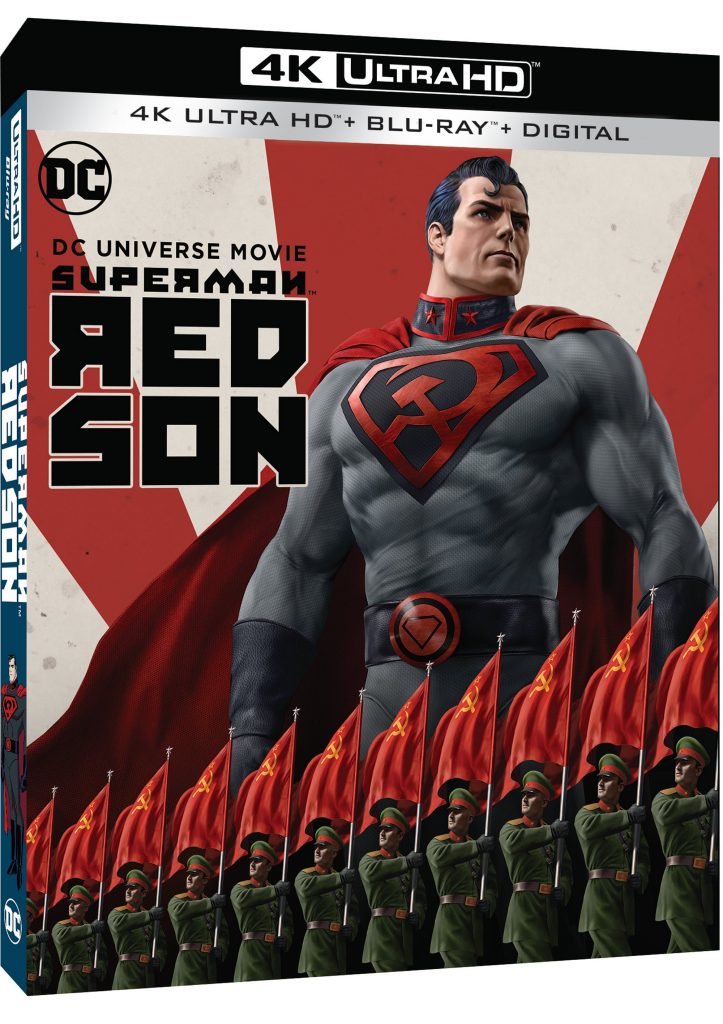 up with tons of movies and television shows. I don’t understand why I have been behind but I am finally am catching up on things and I started with Superman: Red Son. Superman: Red Son is based on the Elseworlds comic written by Mark Millar (Kingsman, Kick-Ass) and was published in 2003. This story looks at the life of Superman had he crash-landed in Russia instead of the heartland of America.

I am a fan of alternate history and I do love the Elseworlds stories (Gotham by Gaslight is my favorite) and I enjoyed this take on the character. The story opens up in 1946 in the post-WWII era at the start of the Cold War. Superman becomes a propaganda tool for the Soviet Union and with his help the U.S.S.R. rises up to spread throughout the word. Superman eventually learns about the gulags and oppression of the Russian people by the government. Superman kills Stalin and takes over as the Russian leader. Meanwhile in the United States Lex Luthor is working to try and find a way to defeat the Soviet Superman.

There is something I need to admit at this point, I never read the comic on which this story was based so I cannot do a comparison and will have to focus on just the movie. Although I did enjoy this film there are somethings that I didn’t get, the biggest being how the United States came to possess multiple Lantern rings. I am assuming that somehow Luthor just duplicated the ring he found on the dead Lantern. The other thing that makes you scratch your head and question the thought behind it is, just because Superman was raised in Russia why did Batman start in Russia as well? Presumably the Wayne family would still meet its untimely end half a world away in a Gotham City alley, so it makes no sense. Even though I know it was to help move the story along and add conflict for Superman but, it still feels forced. I am aware that enjoying fiction means there needs to be a certain level of suspending of disbelief and sometimes you just need to stop asking questions that have no answers.

Though not a perfect movie I did enjoy Superman: Red Son. The animation is what we have come to expect for the DC direct to video movies and the cast is super, I mean superb. The cast includes, Jason Isaacs as Superman. Diedrich Bader as Lex Luthor, Vanessa Marshall as Wonder Woman, Phil Morris as James Olsen and Roger Craig Smith as Batman. Superman: Red Son was directed by Sam Liu who also directed Wonder Woman: Bloodlines, The Death of Superman and Gotham by Gaslight.
The special features for Superman: Red Son are:

• DC Showcase: Phantom Stranger (Animated Short) – Animation legend Bruce Timm helms Phantom Stranger as both executive producer & director from a script written by Ernie Altbacker (Teen Titans: The Judas Contract). Set in the 1970s, the short follows young adult Jess as she joins her friends at a party in a dilapidated mansion hosted by the mysterious Seth … when odd things begin to happen to Jess and her friends, can Phantom Stranger intervene? Peter Serafinowicz (The Tick) gives voice to Phantom Stranger, and Michael Rosenbaum (Smallville, Impastor) provides the voice of Seth. Phantom Stranger also features the voices of Natalie Lander, Grey Griffin and Roger Craig Smith.

• Cold Red War (New Featurette) – An exploration of the Cold War through the lens of the Elseworlds classic Superman: Red Son, as Superman rises to power and tension escalates between the United States and the Soviet Union.