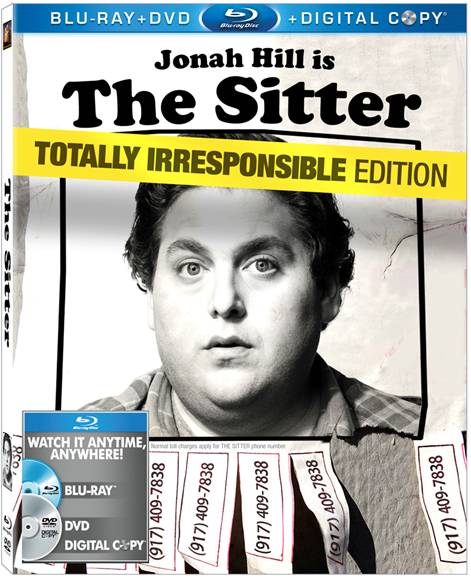 not for the entire family as Jonah Hill (21 Jump Street, Moneyball) steps in as THE SITTER, arriving on Blu-ray, DVD, and digital download March 20th from Twentieth Century Fox Home Entertainment. Defiant, vulgar and envelope-pushing, THE SITTER will be available in the “totally irresponsible” edition offering a hilarious and even raunchier unrated cut of the film.

When Noah (Hill), the suburban slacker, is watching the neighbor’s kid he gets a booty call from his girlfriend in the city. To hook up with her, Noah takes to the streets, but his urban adventure spins out of control as he finds himself on the run from the maniacal drug lord. Raunchy laughs and insane action – it’s all in a night’s work for The Sitter.

With hilarious supporting performances from J.B. Smoove (“Curb Your Enthusiasm”),
Ari Graynor (What’s Your Number?) and Sam Rockwell (Cowboys & Aliens), THE SITTER “totally irresponsible” edition Blu-ray is loaded with special features including an unrated cut of the film, deleted scenes, a gag reel, outtakes and three behind-the-scenes featurettes. The Blu-ray and DVD will be available for an average retail price of $29.99 and $19.99 respectively. Prebook is February 22.

o Getting the Minivan – Extended

o Karl Hugs It Out – Deleted

o Kids on the Curb – Deleted