A father must fight to unite his family 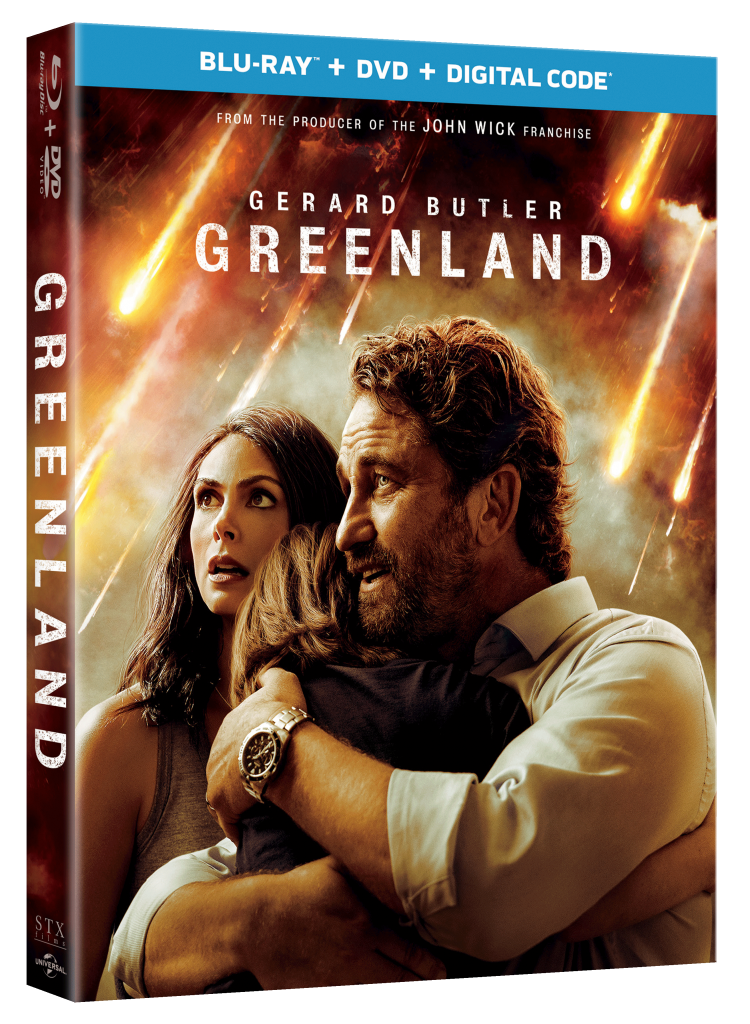 and survive against all odds in the face of a cataclysmic natural disaster in the intense action-packed thrill ride, Greenland, available to own for the first time on digital January 26, 2021 and on Blu-ray™, DVD and On Demand February 9, 2021 from STXfilms and Universal Pictures Home Entertainment. Gerard Butler (300, Has Fallen franchise) produces and leads in the pulse pounding Rotten Tomatoes Certified Fresh® film that also stars Morena Baccarin (Deadpool franchise, “Homeland”), Scott Glenn (The Hunt for Red October, The Bourne Ultimatum), Holt McCallany (“Mindhunter,” Fight Club), David Denman (Brightburn, “The Office”), Hope Davis (Captain America: Civil War, About Schmidt), and Roger Dale Floyd (“The Walking Dead: World Beyond,” Doctor Sleep) whose remarkable performances take audiences on a thrilling journey filled with spectacular special effects, non-stop adventure, and intense stunts from start to finish.

Produced by Basil Iwanyk (John Wick franchise, The Town) and directed by Ric Roman Waugh (Angel Has Fallen), Greenland on Blu-ray™, DVD and Digital comes packed with brand-new bonus features including deleted scenes with introductions from the director and an exciting featurette with Gerard Butler, Morena Baccarin and more that take audiences behind the scenes of the adrenaline-filled story.

A family fights for survival as a planet-killing comet races to Earth.  John Garrity (Butler), his estranged wife Allison (Baccarin), and young son Nathan make a perilous journey to their only hope for sanctuary.  Amid terrifying news accounts of cities around the world being leveled by the comet’s fragments, the Garrity’s experience the best and worst in humanity while they battle the increasing panic and lawlessness surrounding them.  As the countdown to global apocalypse approaches zero, their incredible trek culminates in a desperate and last-minute flight to a possible safe haven.

With the purchase of Greenland on Blu-ray™ or DVD, fans are eligible to earn points towards special rewards via the Universal All-Access Rewards program. Members can redeem their points for digital movies, signed collectables, box sets, win exclusive prizes and more! For FREE registration and details please visit www.MyUniversalRewards.com.

Greenland will be available on Blu-ray™, DVD and Digital.

STXfilms, a division of Eros STX Global Corporation, is a next-generation film studio that produces, acquires, distributes, and markets motion pictures at scale. From blockbusters like Hustlers, Bad Moms, and The Upside to hits like The Gentlemen, Molly’s Game, and The Gift, STXfilms produces star-driven films for a global audience. In just 5 short years, its slate of films has already grossed over $1.8b in global theatrical box office. With a wide range of partners including Universal Pictures Home Entertainment and Showtime (which handle the physical and premium television releases of STXfilms content, respectively), the studio is a fast-growing, industry powerhouse.