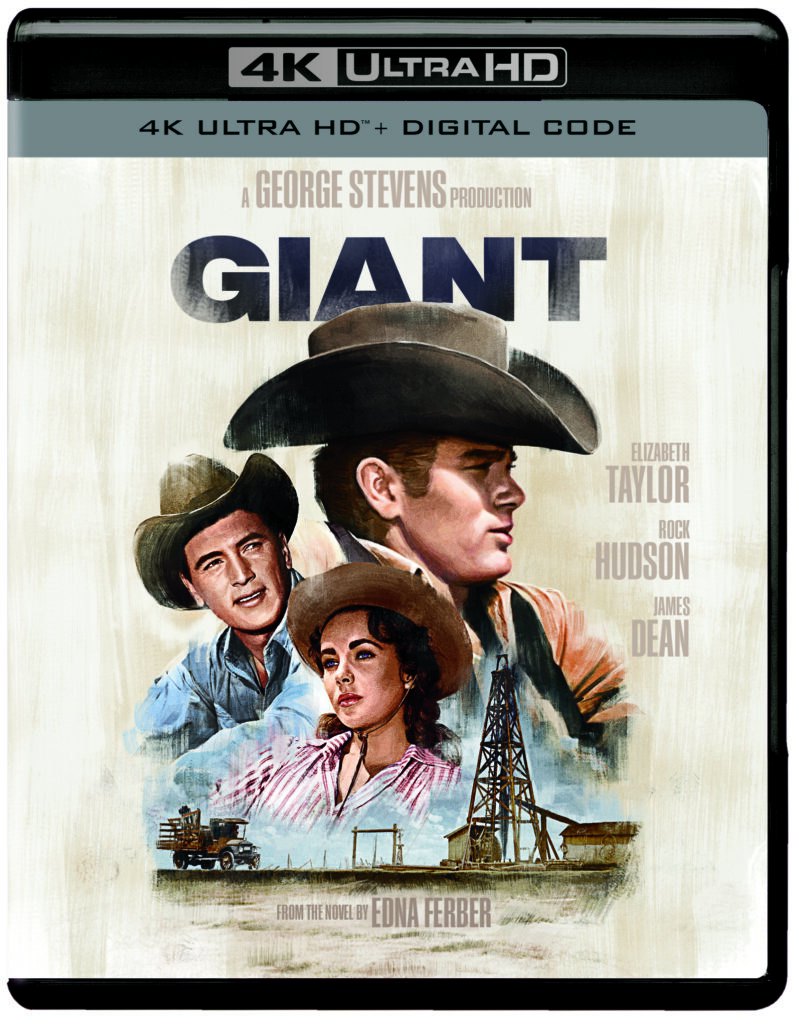 Elizabeth Taylor, Rock Hudson, and James Dean in his final role, will be released on Ultra HD Blu-ray and Digital on June 21, it was announced today by Warner Bros. Home Entertainment.

George Stevens, Sr. won his second Oscar® for directing the sweeping family saga set in Texas during the days of the oil boom. Based on Edna Ferber’s controversial novel, the movie’s release in 1956 was a massive box office hit and garnered 10 Academy Award® nominations.

Considered by critics as ahead of its time, Giant is admired today for the breadth of its humanity more than its epic scale with its grand themes of generational conflict, racial tolerance, and social change. It exposed the marginalization and segregation of Mexican Americans for the first time on the big screen. At the center of the film, Elizabeth Taylor, as Leslie Benedict, portrays a strong and progressive woman who acts to stem the patterns of injustice.

In 2005, the film was selected for preservation in the United States National Film Registry by the Library of Congress as being “culturally, historically, or aesthetically significant.”

The new 4K restoration was completed sourcing both the original camera negatives and protection RGB separation master positives for the best possible image, and color corrected in high dynamic range for the latest picture display technology. The audio was sourced primarily from a 1995 protection copy of the Original Magnetic Mono soundtrack. The picture and audio restoration was completed by Warner Bros. Post Production Creative Services: Motion Picture Imaging and Post Production Sound.

Giant will be available on Ultra HD Blu-ray Disc for $24.99 ERP and includes an Ultra HD Blu-ray disc with the feature film in 4K with HDR and a Digital download of the film.  Fans can also own Giant in 4K Ultra HD via purchase from select digital retailers beginning on June 21.

Elizabeth Taylor, Rock Hudson and James Dean star in a sweeping saga of jealousy, racism and the clash of cultures set in the vast Texas oilfields. Wealthy rancher Bick Benedict (Hudson) and dirt-poor cowboy Jett Rink (Dean) both woo Leslie Lynnton (Taylor) a beautiful young woman from Maryland who is new to Texas. She marries Benedict, but she is shocked by the racial bigotry of the White Texans against the local people of Mexican descent. Rink discovers oil on a small plot of land, and while he uses his vast, new wealth to buy all the land surrounding the Benedict ranch, the Benedict’s disagreement over prejudice fuels conflict that runs across generations.

On 6/21/22, Giant 4K UHD will be available to own for streaming and download to watch anywhere in high definition and standard definition on favorite devices from select digital retailers, and will be made available digitally on Video On Demand services from cable and satellite providers, and on select gaming consoles.