Quantum Mechanix has been around since 2006 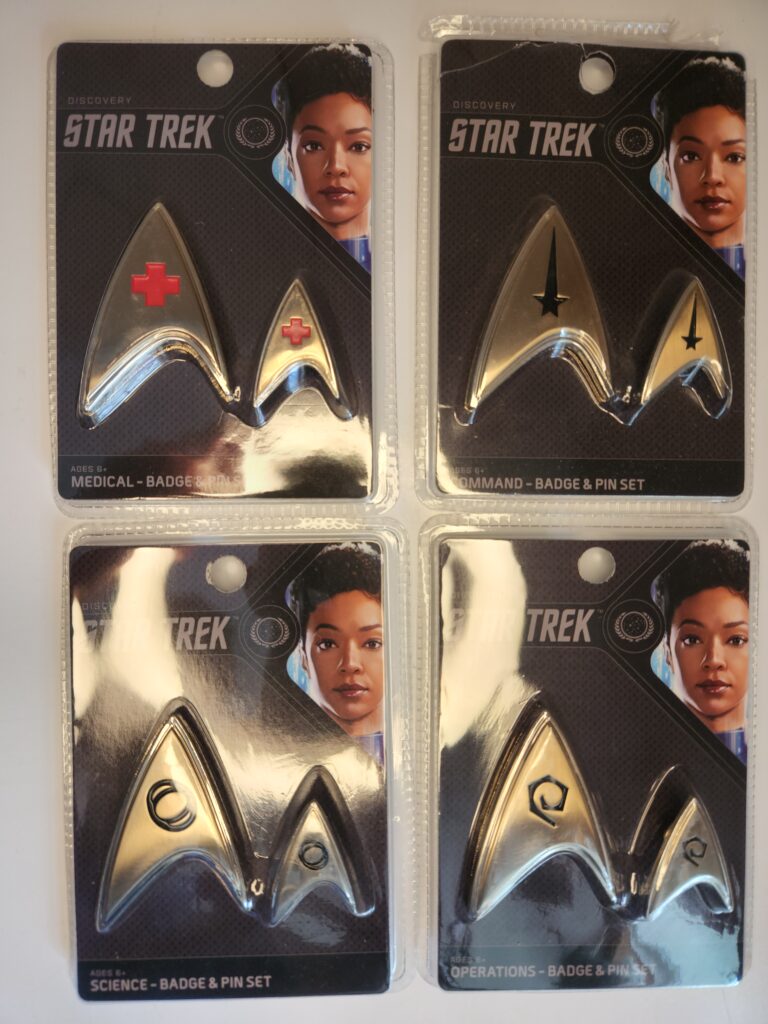 and they are known for producing high quality licensed collectibles, mostly from science fiction franchises. QMx produces various types of products such apparel, plush, jewelry and prop replicas just to name a few things. Today we are taking a look at the Starfleet magnetic division pins from Star Trek: Strange New Worlds.

Designed by costume designer, William Ware Theiss, the delta insignia is probably one of the most recognizable symbols in pop culture/science fiction. Even if a person isn’t a fan of Star Trek, they know that the delta insignia pin is related to Star Trek. Weirdly, of the many people who recognize it, there is a small percentage of people who will reach out, touch your insignia, and request that Scotty beam them up. Sadly, I speak from experience.

When Star Trek premiered in 1966 each ship had its own uniform insignia. The insignia for the U.S.S. Enterprise, for example, was the now iconic delta shape. Over the years the rule changed, and all other insignia were discarded making the delta the standard insignia.

Set 7 years before Captain Kirk took over command of the Enterprise, Star Trek: Strange New Worlds has updated the look from the 1960’s, since our current technology seems more advanced than the Original Series. Even the uniform insignia was given an upgrade from the 1960s design. Most notable is that fact that in the 1960s it was a flat embroidered patch and now it is a slightly raised, metal pin. The uniform is a bit different as well, but we are not here to discuss that change.

I have been collecting pins for at least 30 years. I have pins from various franchises including Star Wars, Alien, Marvel Comics and of course Star Trek. That being said I have to admit that the Star Trek: Discovery/Strange New Worlds pins from QMx are some of the best I have seen. I think I like them so much is because of the magnets. These magnets hold the pin onto your clothing or bag and are quite powerful.  For example, I have been wearing a QMx Star Trek: The Next Generation comm badge on one of my coats for over a year and it never has fallen off. I will admit that it has shifted, but never popped off. I also like the fact that they will not damage your clothing. 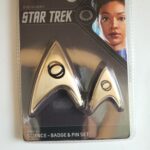 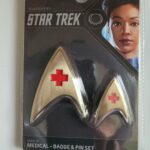 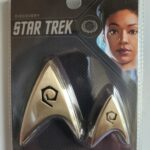 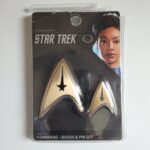 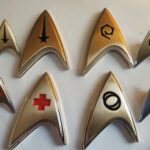 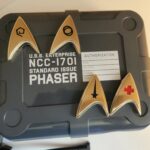 The pins are made out of a zinc alloy and are lightweight, coming in at approximately, 1.8oz. Each pin measures Length x Width x Height: Approx. 1.50″x2.75″x0.25″ and are 1:1 scale to what is worn on the show (all of these measurements come from the QMx website).

The Star Trek: Strange New Worlds division insignia come packaged with the 1:1 scale magnetic pin and a smaller pin measuring 1.5 inches long by 1inch wide. The smaller pin is a standard pin and comes with butterfly clutch pin back to hold the pin in place.

The Star Trek: Strange New Worlds Division Insignia pins are available directly from QMx here and retail for 19.99. Get yours today!

*Star Trek Fun Fact: Did you know that in Star Trek the Original Series, the Medical badge with the red cross was worn by Nurse Chapel (Majel Barrett) while Doctor McCoy (DeForest Kelley) wore the Sciences badge?