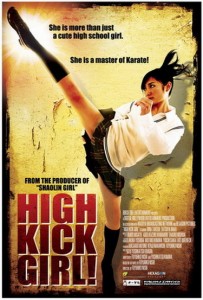 skirt, I thought that this might be an amusing distraction for 81 minutes. I thought that I couldn’t go wrong, pretty girls putting the karate moves on bad guys can be very entertaining, but I was so very wrong.

High Kick Girl (2009) is the story of Kei Tsuchida (Rina Takeda) a schoolgirl with an interesting hobby, she beats up Karate students who have their black belt and upon winning she collects the belt. Kei has only a brown belt and longs to prove herself to her teacher who does not believe that she is ready. As stupid as that sounds there is a gang that wants to recruit the girl in order to get revenge on her teacher. Years earlier the teacher beat up the gang and now it is time for payback!

The plot is weak and the acting is no better than an episode of the Mighty Morphin’ Power Rangers. Some of the moves are pretty cool but over all the fights just did not manage to hold my attention. For some reason during the fight scenes a move is singled out and slowed down and repeated, sometimes twice. The replayed scenes only slow the movie down more and serve to make it less watchable. The movie was directed by renowned martial arts choreographer Fuyuhiko Nishi who made his directorial debut with this movie.

There is no amount of hot chicks in short skirts that would make me watch this clunker again. If you have High Kick Girl in your Netflix or Blockbuster queue do yourself a favor and hit delete. The one saving grace, if you decide to go through with renting it, the run time is only 81 minutes. You can put it on in the background and paint miniatures, cut your toe nails or give your cat a bath.

This entry was posted in Vids and tagged James, Japan, Martial Arts, Vids. Bookmark the permalink.