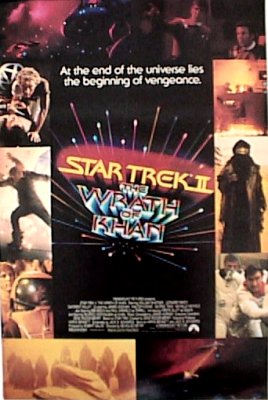 Star Trek movies, Star Trek II: The Wrath Khan. Wrath of Khan premiered on June 4th 1982 and has left an indelible impression on Star Trek fans everywhere. We were reintroduced to evil and it sported a mullet.
Despite the bad hair choice for Khan Noonien Sighn (Ricardo Montalbán) the character was a perfect choice to go up against Kirk in the follow-up to Star Trek: The Motionless Picture. Star Trek II has the distinction of being the only Star Trek movie that is a direct sequel to an episode. In the episode, “Space Seed” after Kirk leaves Khan and the crew of the Botany Bay on Ceti Alpha V, Spock (Leonard Nimoy) ruminates that it would be interesting to return in 100 years and see their progress; well they only had to wait 15 years.

Many movies from our childhood do not hold up as well with the passage of time but the same cannot be said for Star Trek II: The Wrath of Khan. There is a timeless quality about it that allows it to look almost as fresh today as it did in 1982. Many things don’t hold up after 30 years but this does. Nicholas Meyer thought he was just making a movie but he gave us Star Trek at its best. Everything about this movie made us love Trek just a little more. The costumes (I still want a land party jacket), the dialog (“I have been and always shall be your friend.”) and the fact that Kirk (William Shatner) wasn’t perfect after all. As you are aware Kirk screwed up during the first encounter with the Reliant and although he won in the end…fact is he screwed up. The great James T. Kirk was human after all.

I can talk ad nauseum about this movie. I re-watch it every year for my birthday several times a day for the week leading up to the actual day. Ridiculous I know but there is something about this movie and Star Trek itself that touches many of us. So if you haven’t watched it in a while, kick back, pour yourself some Romulan Ale and remember….