Transmissions: A Review for The Amazing Spider-Man

Opening a week an a half ago was The Amazing Spider-Man. Most people t 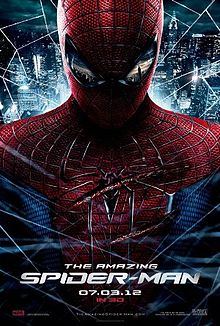 hought it was going to be the significantly lesser of the superhero movies this summer, easily outdone by The Avengers and The Dark Knight. But while it probably won’t knock those two out of the park in terms of box office success, it seems like everyone’s low expectations were vastly surpassed.

The film stars Andrew Garfield as Peter Parker/Spider-Man, Emma Stone as Gwen Stacy, Rhys Ifans (he was Xenophilius Lovegood from Harry Potter 7:1) as Curt Conners/The Lizard, and Dennis Leary as Cap. Stacy (Gwen’s dad). The film also boasts Emmy winner Martin Sheen as Uncle Ben, and Oscar winner Sally Field as Aunt May. It was directed by Marc Webb (mostly known for directing 500 Days of Summer) and had music by none other than James Horner.

It took me a while to staple down just what it was that I loved about this film. Before I saw it, I was talking about the film to someone who had seen it and they compared it to Christopher Nolan’s Batman movies. It took me a little while, but I can see that now. We already have Spider-Man movies that are pretty much straight from the comic in look and feel with the Sam Raimi/Tobey Maguire films. Say what you want about them, but Raimi’s focus was making the comic into film. With this movie, though, the comics were used as a starting point and inspiration to create another interpretation of the same subject. And that’s what Nolan is doing with his Batman movies. While it pains me to even say the title, Batman & Robin is more accurate to the comics than The Dark Knight. But accuracy isn’t Nolan’s goal, and neither was it Webb’s. It would be suicide to make another Spider-Man movie that follows the exact plot points and directions of the comics, especially since this one deals with Spidey’s origin—a story we saw just ten years ago in film.

So Webb focuses on a lot of different qualities of the Spider-Man characters and mythos that we haven’t seen a lot of in film. I think Garfield shows a lot more emotion than Maguire did, and he and Stone have a lot of great on-screen chemistry. So the film captures a lot of fantastic teenage angst and emotion. The film also obeys the great law of storytelling: ‘show, don’t tell’ by simply showing us how the characters are responding to situations, and letting us the audience figure out what’s going on inside their heads. Ifans plays a great villain for the film: creating a character that you sympathize with and like, and later understand the choices he makes which lead him down a darker path. James Horner’s music is rather unconventional for a superhero blockbuster, but plays very well with the film. The color scheme, lighting, and cinematography were instrumental in making the film look different from Raimi’s movies, which was absolutely essential.

So definitely see The Amazing Spider-Man. The 3-D effects aren’t used inappropriately as a gimmick, so you can see it either way, really. It’s a lot of fun, and best of all, it’s something new.

Check out Ted at http://www.tedwoodsart.com/