Continuing their relationship with Dave Stevens’ high-flying her 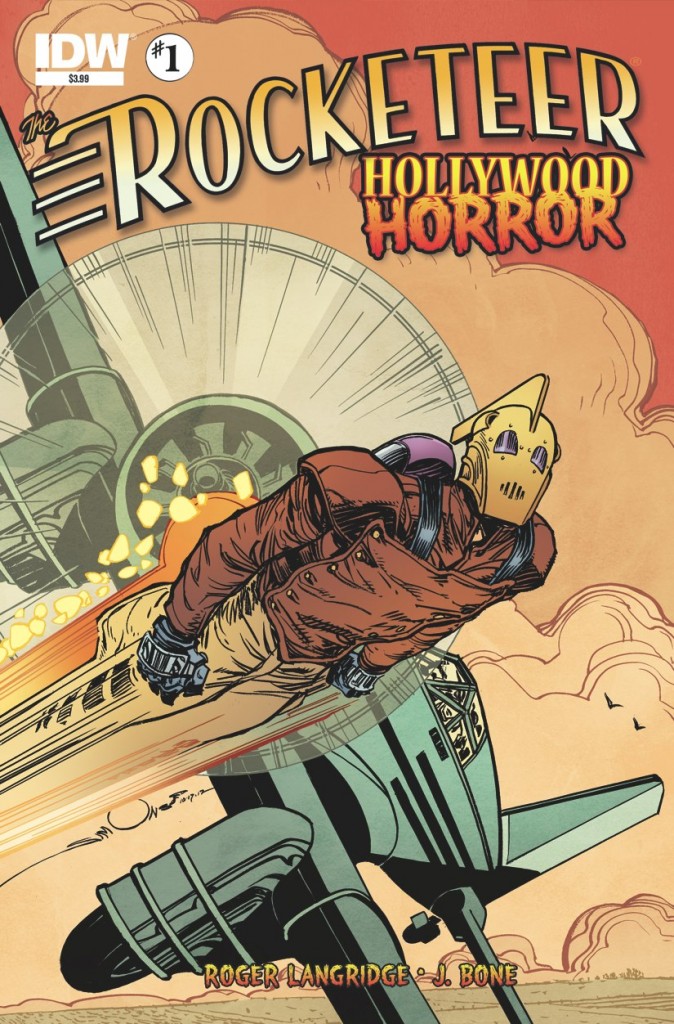 o, IDW Publishing is pleased to announce a brand-new Rocketeer miniseries for 2013! Beginning in February, fans of Cliff Secord’s aeronautic acrobatics will be treated to THE ROCKETEER: HOLLYWOOD HORROR! Written by Eisner and Harvey Award winner Roger Langridge (Thor, Popeye, Snarked!) and illustrated by Eisner nominee J. Bone (Batman/The Spirit), Hollywood Horror is another action-packed chapter in the saga of comics’ favorite flyboy! As an added bonus, legendary comics superstar Walter Simonson has signed on as cover artist!

“You can count the really great superheroes created since the 1960s without taking your shoes and socks off, and The Rocketeer would have to be somewhere near the top of that very short list, so it’s a great privilege to be writing his adventures,” said Langridge. “And I’m particularly thrilled to be working with J. Bone on the art chores. He’s definitely an artist’s artist, in the best possible sense. We’re working hard to give this story our own personal twist without losing the classic Rocketeer tone, so you can expect plenty of fiendish schemes, famous cameos, derring-do, pretty girls and (of course) thrills galore!” he continued.

“Roger has given me so many terrific characters from the world of The Rocketeer and old Hollywood that drawing each scene excites me to get on to the next; and the next,” said Bone. “I enjoyed my initial taste of drawing the Cliff and Betty in The Rocketeer Adventures #4 so much that I’m thrilled to be drawing them again!”

Always caught in the middle, it’s a pulp thrill ride when Cliff finds himself embroiled in a dark mystery in the seemingly picturesque heart of Hollywood’s golden age! He may be neck-deep in mystery and mayhem, but it wouldn’t be a Cliff Secord caper if his sweetheart, the stunning Betty, weren’t steamed at him!

Also flying onto shelves in February is the hardcover collection of Mark Waid and Chris Samnee’s THE ROCKETEER: CARGO OF DOOM! Deadly creatures from lost lands find their way to California’s shores and create some awfully hot water for Cliff and friends in this rollicking four-issue series, collected in a beautiful hardcover volume.

For fans of high-altitude adventure and on-the-ground intrigue, there’s simply no substitute for The Rocketeer!

Visit IDWPublishing.com to learn more about the company and its top-selling books. IDW can also be found at http://www.facebook.com/#!/idwpublishing and http://tumblr.idwpublishing.com/ and on Twitter at @idwpublishing.