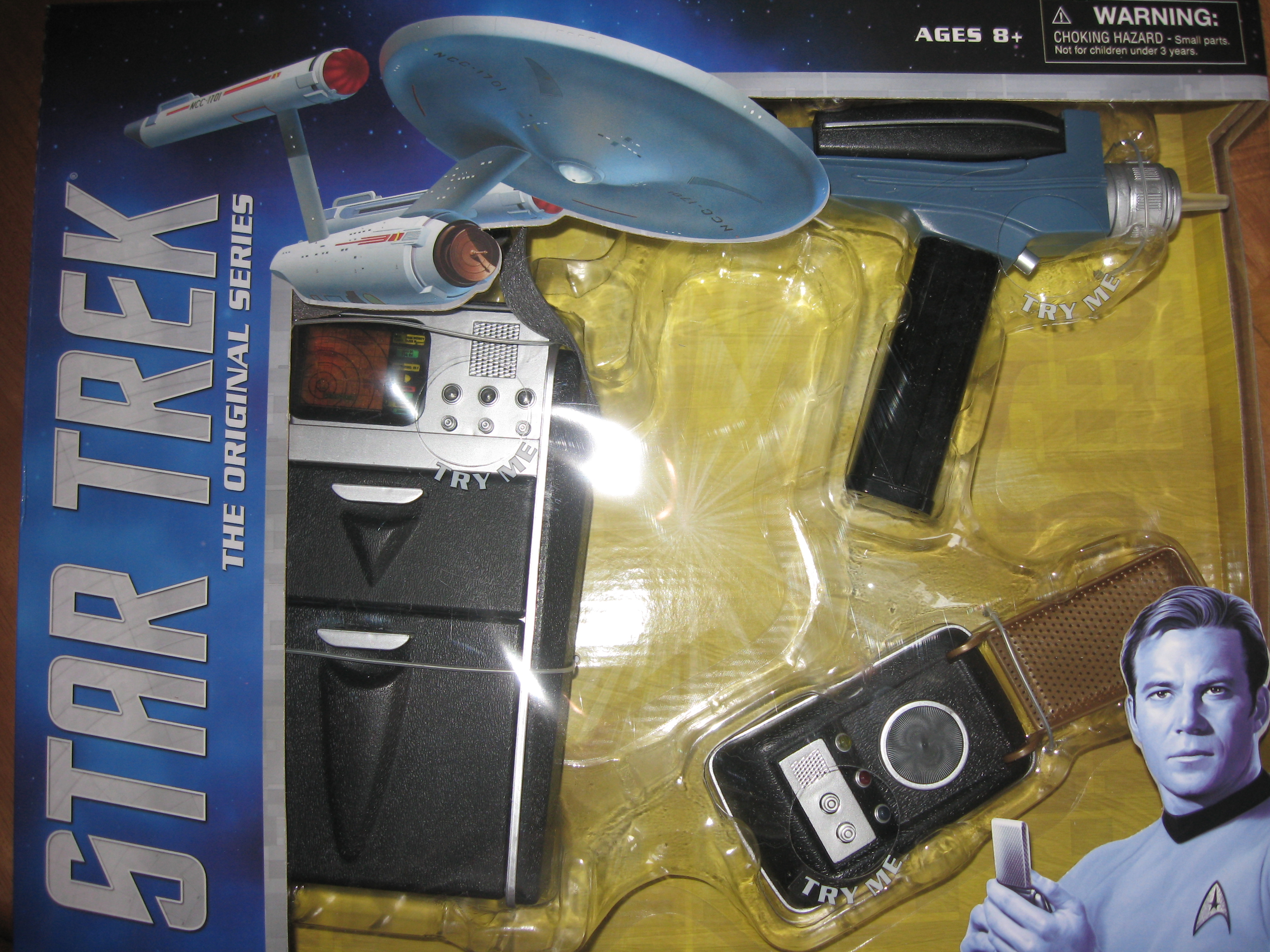 . According to my father I could recite Kirk’s “Space the final frontier” speech verbatim from the age of 5. One of my fondest Trek related memories comes from when I was in 3rd grade. I had arrived home from school and after changing out of my uniform my mother presented me with the AMT Exploration Kit, which consisted of a tricorder, phaser and communicator. The models had already been assembled by my cousin Anthony, meaning I didn’t have to wait to play with them. I loved that set. Sadly over the years those models gave in to the ravages of time. The good thing is that Diamond Select Toys now has a modern take on that model kit and it is amazing.

The props from the Original Star Trek have been a part of popular culture for 47 years and are probably the most recognizable science fiction props in the world. Pull out a communicator and 8 out of 10 people (that is a rough estimate) can tell you it is from Star Trek and pretty much everyone knows the word phaser. When most of us were young there weren’t any quality, inexpensive Star Trek props to help you pretend you were landing on an alien world.

In the 1970’s there were poorly made replicas of phasers that were in no way to scale and this includes my beloved AMT model. There were no communicator or tricorder toys so as a child we only had our imaginations. The 1980’s was a dead zone for Star Trek role play toys. The only way you could get the gear to arm your red shirts was to purchase fan made resin props. Very fragile and very expensive; these were more for display than play.

The 1990’s finally brought fans and collectors affordable role play toys from Playmates. Playmates started with Star Trek: The Next Generation but eventually tackled the Original Series. Their version of phaser II was not a bad reproduction though it was a little stubby and did not have a removable phaser I. The communicator they produced ha a couple of sound effects with a plastic flip grid antenna and a holographic sticker in lieu of a working moray. Eventually Playmates would produce what they referred to as a “Talk Back” communicator with voices from the show. The body of the communicator was identical to that of the first communicator released. The final piece of equipment was the part I was the most excited about, the tricorder. Sadly the tricorder was barely 1/3 the size of what was used on the show. Obviously made it was made for young fans but it was the adult collectors who craved this prop.

The new century brought with it a new company who had acquired the license and a whole new approach to produce affordable prop replicas. Art Asylum began producing figures and “Trek Tech” for the newest Star Trek series, Enterprise. The first tech produced was the phase pistol and communicator and although they were made for kids they were perfect size for the adult collector. Eventually Art Asylum became part of Diamond Select Toys began and together they began producing Original Series “Trek Tech” and it has been a geek’s dream come true.

Diamond Select Toys’ phaser is a perfect 1:1 scale replica of the Starfleet side arm first seen in 1966 and designed by Wah Chang. Funny thing is that the toys are better made than the props they were designed after. These toys were actually used in the fourth season of Enterprise for the episode “A Mirror Darkly” because they look that damn good. This toy has several power settings from stun to disintegrate with corresponding sounds just like the real thing. Other features of the phaser include an illuminating tip and a removable phaser I. The version that comes with the set is the black handle version with a gray body.

Several other versions have been produced each sporting different colored handle including white and gold. Even if a specific color handle made only one appearance Diamond Select produced the variant. No matter the grip color, it is still a great toy.
The phaser is really 2 toys in one since the smaller phaser I unit separates from the phaser II housing. Phaser I has several force settings that are controlled by the force setting dial on the top of the unit. When the smaller unit is placed into the main body housing you can control the force by turning the dial on the back of unit. You can also adjust the beam intensity or turn the light off completely.

Next up is the communicator. The communicator is probably one of the most recognizable science fiction prop ever made. Just like the phaser this prop is 1:1 scale and it is just as awesome as you think. This is an updated version with a plastic flip grid antenna as opposed to the metal one in previous releases. The matte color of the grid looks good but I am a fan of the metal grid. The plastic grid does stay closed better than the metal one did. Also with the matte color on the antennae, it does look more like the prop from the television show.

The communicator has lights, sounds, a spinning moiré and clips of dialog. These clips are activated by pressing the blue button on the unit. The voices are clear and are actual clips dialog from the original series. One of my favorite features is the hail back feature. This is achieved by pressing the red button then closing the antennae grid after about 30 seconds the communicator begins to beep. When you flip it open you hear Leonard Nimoy’s voice asking, “Captain, should I beam down an armed party?”

The voices are identical to the television show which adds to the fantasy of talking to the ship. It isn’t just the communicator that has perfect voice reproduction, the tricorder also sounds just like the television show. The tricorder also has several phrases from the classic Trek. Although the voice is a great addition, I don’t remember the tricorder “talking” at any point during the show. DST did do a great job picking the phrases. There is also a setting where the tricorder beeps a warning when closed (similar to the communicator). When you open it Spock is heard quoting the episode “Arena” “They’ve locked onto my tricorder” followed by an explosion sound. Though the actually tricorder from Star Trek didn’t actually speak to the user it is a nice touch. Some of the other phrases are:

• “Captain, impulse in that direction. Very weak, possibly a survivor.”
•
• “Strange – readings indicate a life form in the area, apparently human.”
•
• “Getting another life form reading, Captain. Azimuth 93 degrees range 1570 yards.”
•
• “Seems to be some disturbance coming from that cave.”
•
• “An alien metal of some kind, an alloy resistant to probe.”

Watch the YouTube video below. The video will show you a complete demonstration of the functions. Reading about the features, no matter how well written doesn’t give a good enough picture.

As I said before tricorder isn’t supposed to speak, but I think that it works in this case. The recording payback is perfect and you can really tell it is Leonard Nimoy speaking. This isn’t always the case with playbacks. A few years ago a Medical tricorder that an acquaintance purchased sounded more like Alvin the chipmunk than DeForest Kelley. As with all mass produced there are always the possibility of defects so it is to be expected. The tricorder from the set I received had a non-functioning moiré. The defect isn’t something to worry about. According to Diamond this has not been an issue. This doesn’t distract from the beauty of this item.

These 1:1 scale toys/prop replicas are perfect for cosplayers (convention season is right around the corner) or for someone who just loves Star Trek. I do give it a rating of four stars. I do this because every unit in the set pleased not only the little kid part of my brain for playability and the adult side for the accuracy. The price point may be a deterrent for some since this set is going to set you back at least $99.99 on Amazon. Trust me, it will be money well spent for either yourself or for the Trek fanatic in your life. Whether you call it an “Exploration Kit” or the “Landing Party Pack” this 3 pack is a must. You will not be disappointed. I can’t wait to see the next piece of Trek Tech that is being released from Diamond Select Toys which will be the Klingon Disruptor. The Klingon Disruptor is supposed to be hitting shelves now so check out your local comic dealer or the internet.

Diamond Select Toys does a great job with all their product lines and this is no exception. Each piece in the Landing Party kit is durable, packed with features and well made enough to be displayed. Get yours today so you will be always ready when you get summoned to the transporter room. 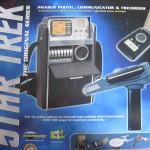 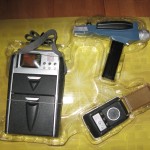