What do you get when you mix Mission Impossible, The Man from 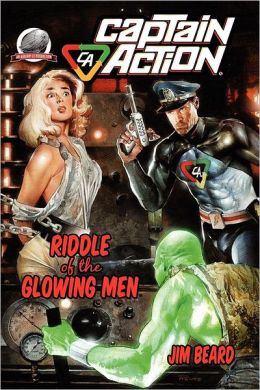 U.N.C.L.E. and Jonny Quest? You get The Riddle of the Glowing Men written by Jim Beard.

The swinging sixties were a time a time of highs and lows for the world. The two great super powers, America and the Soviet Union crossed paths many times somehow avoiding a nuclear confrontation. A hot war raged in Southeast Asia, a Cold War kept the human race one button push from Armageddon and space was the preferred destination. Because of the tension in the world, the spy genre was at its peak, in novels, on television and on the big screen. The sixties were and are a rich backdrop for a novel, especially the newest offering from author Jim Beard entitled, Captain Action-The Riddle of the Glowing Men.

Captain Action was Ideal’s answer to Hasbro’s G.I. Joe. He was a super cool master of disguise with a seemingly endless roster of identities. In The Riddle of the Glowing Men, Miles Drake, aka Captain Action, must discover what is irradiating people and who or what is behind this glowing conspiracy.  Beard did an excellent job capturing the feel of classic pulp novels for Captain Action’s first foray into novel form. The Riddle of the Glowing Men is a bit of Mission Impossible, The Man from U.N.C.L.E. and a little bit of Jonny Quest thrown in for good measure. Jim Beard’s novel is a fun bit of escapism back to an era that was both shaken and stirred.

Captain Action-Riddle of the Glowing Men has Captain Action trying to solve a mystery that has its roots in a 1908 disaster while keeping the cold war from turning hot. Myles Drake and the A.C.T.I.O.N Directorate (Advanced Command for Telluric Interdiction Observation and Nullification) are pulled into an adventure that goes from the United States to the frozen landscape of Siberia and has the fate of the world hanging in the balance. Captain Action must team up with the beautiful Russian agent who is more than she seems and enter an underground world inhabited by a lost civilization. During their investigation into the origin of the Glowing Men Captain Action comes face to face with an evil he thought long dead.

Jim Beard does an excellent job making the world of Captain Action come to life as well capturing the feel of the decade. Beard’s love for pulp novels and comic books really comes through in his writing.  Captain Action-The Riddle of the Glowing men is a fun read with enough twists to keep the reader entertained.