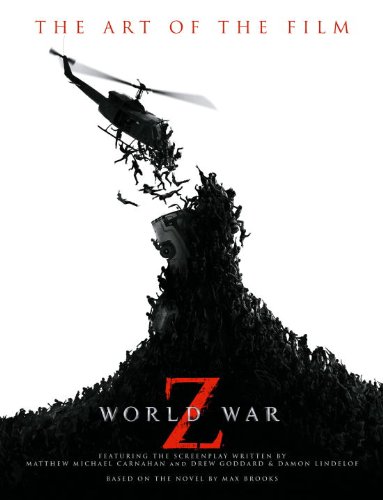 , based on the Max Brooks novel. The motion picture adaptation of  World War Z stars Brad Pitt. This action/horror flick depicts the end of the world at the rotting hands of the undead. Prior to the film being released the zombie designs were kept under wraps but now with The Art of the Film World War Z (Titan Books) you can see just how the zombies in this movie evolved.

This book is broken into 12 chapters, with each of these chapters corresponding to a location in the film. The bulk of the text in the book is the script with quotes from various production members and actors interspersed throughout.  Personally I like the idea of just having the quotes in lieu of chapter after chapter behind the scenes information.  The emphasis is on the actual art of the film which is what an art book should be.

The Art of the Film World War Z has photos of not just the rough sketch storyboards but also included are images of the pre-visualization process. If you are not familiar with pre- visualization it is process that allows the director to actually map out scene prior to filming and differs from a storyboard by being animated.

The Art of the Film World War Z is an oversized soft cover measuring 10.7 x 8.4 and retails for $19.95 USD. Check out Titan Books online to see what is coming next.