Cosplay is flourishing at Wizard World events, and grou 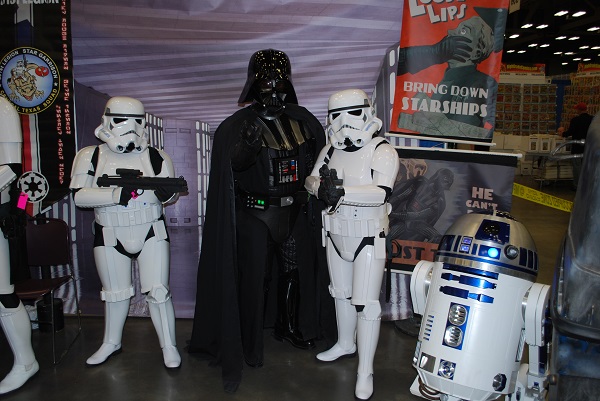 ps showing off their
affinity for all-time classics like Star Wars, “Star Trek,” Ghostbusters and
many other movies, TV shows, comics and other characters will be on hand at
Wizard World Austin Comic Con, Nov. 22-24 at the Austin Convention Center.
Famed cosplayer Ivy Doomkitty will lead the way as thousands
dress the part in a celebration of ultimate fandom all weekend.

Not to be outdone, “Doctor Who,” “Battlestar Galactica” and steampunk organizations will
also represent their favorite genres well during the event.

Groups scheduled to show their devotion at Wizard World Austin Comic Con
include:

· 405th Infantry Division, a community of prop and costume builders united in the common goal of expanding the knowledge of costume and prop fabrication, letting anyone build and wear costumes of the highest quality.
· 501st Legion Star Garrison, an all-volunteer organization which seeks to promote interest in Star Wars through the building and wearing of quality costumes, and to facilitate the use of these costumes for Star Wars-related events.
· Anomaly Podcast, whose episode topics include Sci-fi and Fantasy television, film, literature, games, interviews, costuming, geek culture and more. The shows also release
convention and renaissance festival reports.
· Austin Toy Museum, a professional organization dedicated to the preservation and
education of the cultural significance of toys, consisting primarily of action
figures, key comic books, and popular character toys from the 1950’s to the
early 1990’s.
· Ark Angel, the local Austin-based chapter of STARFLEET, which has provided “Star Trek” fans a way to meet each other, make friends, have fun, give back to their communities, and show that the dream of Gene Roddenberry can live long and prosper.
· Battlestar Raven, serves as Battlestar Galactica Fan Club’s Flagship Chapter. It
is a fan driven website dedicated to “Battlestar Galactica” and fans from all
series are welcome to join.
· Central Texas Droids, a local branch of the R2-D2 Builders Club, using the web as a common means to gather information, share thoughts and ideas with one common goal… to build its very own life size Astromech Droid.
· Central Texas Galactic Alliance, a Star Wars fan group, formerly the Austin Fan Force, which focuses on costuming and going to local events and participates in various
charities.
· DFW Ghostbusters, a non profit fan group that brings together fans of the 80’s blockbuster film. It assists and encourages members to build screen accurate props and do public appearances.

· Doctor Who Fan Club of Austin, a local Austin Facebook Fan Club that
participates in holding watch parties, bound together by the love of “Doctor
Who” and living the values shared as Doctor Who fans.

· Doctor Who Fans Unite, created to bring together fans of the long time running
television show Doctor Who and, in following with the beliefs of the main
character, its mission is to serve the community as a group.

· Fleet 31, a free-to-join, international “Star Trek” fan organization, with an
emphasis on charity and having fun. It seeks to provide a community to all “Star
Trek” fans, as well as resources for those wanting costumes and
props.
· Ghostbusters ATX, made up of a group of individuals
who share a common enthusiasm for the 1984 classic Ghostbusters. It hopes to
spread joy and build a better community through common love of this film.

· Heroes and Villains of Cosplay (HAVOC), a cosplay and
gaming community that promotes, supports, and participates at a variety of
charity and public events. Its goal is to entertain as various Cosplay
characters and provide smiles to patrons.

· Ikkicon, a Japanese Animation and Pop-Culture Convention, held annually in Austin, which traditionally runs for three days during the beginning of the calendar year,
priding itself in bringing together the most amazing anime and pop-culture
fans.
· Knights of the Alamo (KOTA), a Star Wars community
of fans and costumers who volunteer, perform saber demonstrations, conduct Star
Wars related panels, and take pictures with fans.

· Lone Star Jedi / Lone Star Jedi Dallas, a community charity organization made up of volunteer Battle Saber Enthusiasts that originated deep in the heart of Central
Texas. We learn and teach saber combat and use those skills to perform shows and
other events.
· Punching the Walls of Reality, which has weekly videos and podcasts as well as articles. If you’re a writer, artist, or really anyone who has something interesting to say, we’d be more than happy to conduct an interview and give you some free press.
· Rebel Legion Kessel Base, an international Star Wars costuming organization created
by, of and for people interested in creating costumes from the Star Wars mythos.
Members research, create, build and improve costumes and share skills, tips and
ideas.
· The Revenant Rangers, a Steampunk group that makes
props for movies and costumes, helps to promote steampunk community events, and
participates in fund raisers for various charities. They will have their “Brass
Bison Saloon” set up for pictures.
· Sith Shadow Council of Texas, a Star Wars fan group that uses costuming, lightsaber combat, and a love of all things Star Wars to raise money for charity.
·
Space City Con, the Gulf Coast’s newest fan culture convention and
family entertainment pop culture expo for all ages. For fans of comics, sci-fi,
fantasy, gaming, literature and art.
· The Steam Engine Intrepid, a renegade steampunk group out of San Antonio, Texas, but with scouts in other cities, which prefers to travel by rail because the thought
of an airship sickens its leader, the Dark Professor.
· USS Joan Of Arc, an active and spirited “Star Trek” / Sci-Fi group, always using
friendship, a forward-thinking, positive attitude and fun community service to
lay the groundwork for a bright future similar to what Star Trek’s creator, Gene
Roddenberry, envisioned over 40 years ago.
· USS Navras, the flagship chapter of the 1701st Fleet, a worldwide “Star Trek” fan organization. From charity work to gaming, from public appearances to appearances at
children’s hospitals, the 1701st Fleet proudly lives up to its slogan of “Go
Boldly… or Go Home.”
· USS Zavala, a meeting chapter of STARFLEET International which actively fund raises or volunteers for Toys for Tots, the Houston Area Women’s Center and other charities its members care about.

Eisner Award Hall of Famer Stan Lee, Norman Reedus of “The Walking
Dead,” WWE® Superstar John Cena® and “Star Trek” captains William Shatner and
Scott Bakula are among the top celebrities scheduled to attend Wizard World
Austin Comic Con.  The standout roster will also include Bruce Campbell of Evil
Dead, Erica Durance of “Smallville” and “Saving Hope,” Jewel Staite of
“Firefly,” The Karate Kid Ralph Macchio, “Machete Kills” director Robert
Rodriguez and many others.  It is the eighth and final event in the 2013 series
produced by Wizard World, Inc. (OTCBB: WIZD) and will also feature a top-drawer
collection of well-known artists and writers and a variety of activities,
exhibitors and special attractions.

Additionally, all full price attendees will receive a free copy of the Exclusive Variant Cover of The Walking Dead #1 comic, available only at Wizard World Austin Comic Con.