No one knows the criminal mind like a criminal, so why

not use bad guys to go up against the criminal element? Besides, if they die in the process, no one is going to mourn the death of a killer. This is the premise of the new Warner Animation movie, Batman: Assault on Arkham. Amanda Waller (CCH Pounder) calls upon the “Suicide Squad”, a group of super villains that are used when the government needs that “special touch.” This time the Squad must break into Arkham Asylum, a place most bad guys avoid.

Batman: Assault on Arkham was my first experience with the Suicide Squad and I have to say that I like the concept. Getting to see bad guys doing good (I used the term loosely because they have no concern for body count) is fun. The Suicide Squad, or Task Force X is called up to retrieve the Riddler’s cane which holds a thumb drive containing sensitive information.

Set in the world of the video game series, Batman: Arkham Aslyum, and set after the events of Arkham: Origins this direct to video feature is a fun romp with Batman (Kevin Conroy) as a secondary character. The Suicide Squad is led by Deadshot (Neal McDonough) and consists of fan favorite Harley Quinn (Hynden Walch), Captain Boomerang (Greg Ellis), Black Spider (Giancarlo Esposito), Killer Frost (Jennifer Hale) and King Shark (John DiMaggio). The plan to get into Arkham and get out, while well-conceived, doesn’t go precisely as, well, planned.

Probably because love is blind, or maybe just because Harley is a major nut case, she manages to help the Joker (T 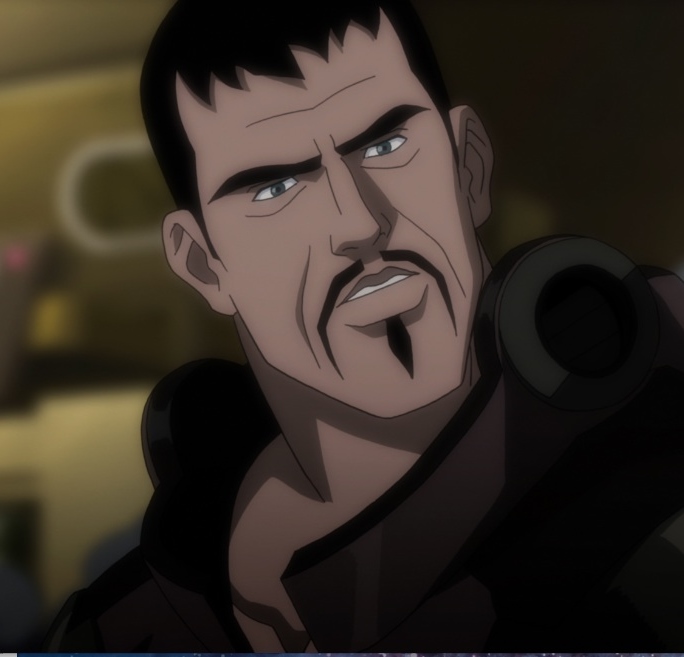 roy Baker) escape. Since the Joker is a whole different level of crazy he decides to take on the entire Squad (it is mostly a jealousy thing since Harley slept with Deadshot).  To make matters worse for the team, Waller wasn’t completely honest about the mission. She gave Killer Frost a side job: to assassinate the Riddler.  While trying to save his own life, we find out Waller wants The Riddler dead because he knows how to short out the bombs implanted in each of the Squad.

Batman shows up, throwing a monkey wrench into Waller’s plans but his goal is to stop Joker and his dirty bomb. The final battle has Deadshot and Batman fighting the Joker and Harley while trying stop the bomb before it detonates, killing innocent people. The final scenes will leave you guessing.

I have to say that I really enjoyed Batman: Assault on Arkham. I have to admit that Harley had some of the best lines. Written by Heath Corson and directed by Ethan Spaulding and Jay Oliva this is a great addition to your animated DC movie collection. Everything from the writing, to the animation right down to Robert J Kral’s score is highly enjoyable and criminally infectious.

Batman: Assault on Arkham is available on Blu-Ray/DVD as well as digital download on Tuesday August 12. Missing out on this one would be a crime.

Batman: Assault on Arkham is rated PG-13 for violence and sexual references. This may not be for your kids…watch it first and decided for yourself. It is perfect for adults though…