One of the creepiest shows on television, The Strain is coming to home vide

o in a special Blu-ray edition. This interesting take on the vampire genre hooked me from episode one and if you haven’t watched it before here is your chance to catch up before season 2.

When a freak virus kills most of the passengers on an airplane, Ephraim Goodweather (Corey Stoll), head of the Center for Disease Control’s “Canary Team,” is immediately called to the scene. The only way to stop the terrifying disease is to face its source – a sinister supernatural creature whose evil intent seems more powerful than any force on Earth – in this chilling series that also stars Mía Maestro, David Bradley and Sean Astin. 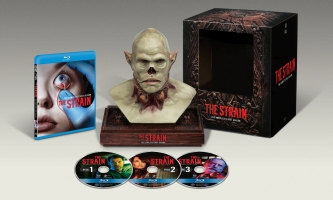 “The Strain” Season One Premium Blu-ray™