When it comes to television, we have come a long way from the days 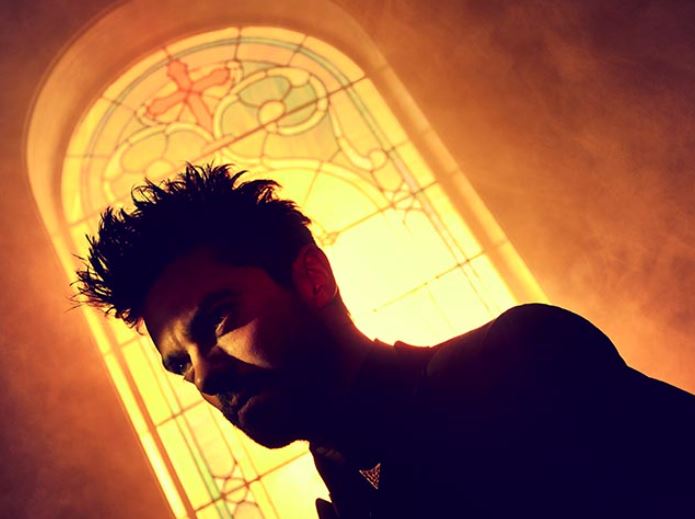 of Ozzie and Harriet. Some of the new shows seem to be going for shock over substance, although there are some that can manage both. So in the day and age of shows like “Game of Thrones” and “The Walking Dead”, the bloodiness of AMC’s newest series, “Preacher” should come as no surprise. The pilot episode begins in space where we spy an ethereal being as it searches through our solar system. When this entity arrives at Earth it interrupts a religious service and chooses the minister as its host. We learn quickly that this entity’s power cannot be contained as the minister explodes, showering the congregation in blood. Hell of a way to start a show.

Based on a comic book of the same name, Preacher is the brain child of writer Garth Ennis and artist Steve Dillon. The show does manage to capture the feel of the comic with the a macabre theme passing through all the interconnecting stories. The gross out factor is also high with one character using to a broken champagne bottle to “tap” someone so they can drink their blood. This same character later devours and entire cow in a frenzy of gore. The blood and badassery isn’t limited to the boys, we are also meet with a strong female character that leaves her own trail of bodies. Yes, “Preacher” made a very bloody premiere, and for some that is very satisfying, but it is so much more than that.

“Preacher” premiered on May 22nd on AMC and will run for 10 episodes, Sunday nights (check your local listings for airtimes). This series, which was years in the making, is based on the popular Vertigo/DC comic that ran from 1995-2000. Seth Rogen (yes, THAT Seth Rogen, the one from ‘Neighbors’ and ‘Pineapple Express’) wrote the pilot episode along with Sam Catlin; Rogen is also a producer on the show.

The series stars Dominic Cooper (‘Captain America: The First Avenger, ‘Agent Carter’) as Jesse Custer, a small town Texas preacher. Jesse is a man with a past who has lost his faith in God; and then the aforementioned entity finds him. Afterwards, Jesse seems to be set on a new mission to set things right, not only for himself but for everyone. We are also introduced to Cassidy (Joseph Gilgun), a vampire that loves drinking whiskey; Tulip O’Hare (Ruth Negga), an old flame of Jesse’s; Emily (Lucy Griffiths), Jesse’s right hand woman at the church; Hugo Root (W. Earl Brown), the town’s sheriff; and a character simply known as Arseface (Ian Colletti). Several other nameless yet seemingly important characters are also introduced, but more about them in time.

Speaking of time, it will take time to answer all of the questions left after the premiere episode. For instance, what did Jesse do that was so unforgivable? What is this invisible entity and why did it not affect Jesse in the same manner as the others? Who is after Cassidy and why? What is the ‘job’ that Tulip mentions to Jesse and why does she want his help with it? And finally, what is it that Arseface did that he thinks is so unforgivable and what is up with his face!?!? There are, of course, more questions, but isn’t that a good thing? One sign of a good television series is that it does not answer all questions left by the viewer right away.

As far as this viewer is concerned, AMC has yet another hit on their hands. For me a good show makes anticipation something the viewer wants to feel. I enjoy not just waiting for the next episode but wait involved. Does that make me weird? Who cares…