Vids: The Wonder Years the Complete Collection from Time-Life

For six seasons, The Wonder Years captured the angst of 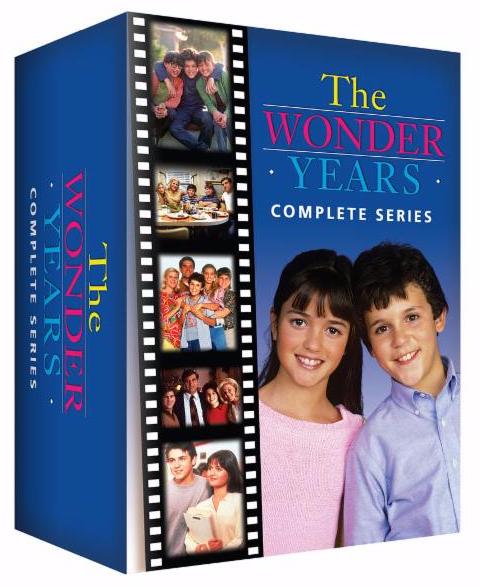 growing up in suburban middle-class America in the late ’60s, as seen through the life and times of Kevin Arnold (Fred Savage).  Audiences eagerly followed his evolution as a typical awkward teenager who remembered every moment of his transition from childhood with excruciating detail and remarkable hindsight.  From his first kiss with Winnie Cooper (Danica McKellar) to his friendship with Paul Pfeiffer (Josh Saviano) and the ups and downs of the Arnold family, fans shared in laughter, love, and loss, but above all, wonder.

This 22-DVD set contains all 115 episodes from the six seasons of this landmark series that aired from 1988 to 1993.  Included in this specially-priced slipcase set are complete show notes with episode synopses, cast member reflections, “Current Events,” and more plus nearly 12 hours of bonus material, as well as an astounding soundtrack of over 300 classic period songs as they were featured in the original broadcasts featuring such artists as: Jimi Hendrix, Bob Dylan, Joni Mitchell, The Byrds,  Simon & Garfunkel, Aretha Franklin, James Taylor, and of course, Joe Cocker’s unforgettable theme.

•Highlights from the first cast reunion in 16 years

ABOUT THE WONDER YEARS

The Wonder Years debuted in 1988 following ABC’s broadcast of Super Bowl XXII, and the affectionate look at growing up in the late ’60s and early ’70s in suburban America was unlike anything else on television.  It was 1968 — the year of Nixon, space walks, Mod Squad, and Vietnam.  Enter Kevin Arnold, a sixth grader at Kennedy Junior High School.  Set against the suburban backdrop of Anytown, USA, Kevin sought to minimize his teenage angst while dealing with an older, noogie-happy brother Wayne (Jason Hervey), a rebellious sister, Karen (Olivia d’Abo), distant, workaholic father, Jack (Dan Lauria) and doting housewife mother, Norma (Alley Mills).  Add to the mix Paul Pfeiffer (Josh Saviano), his nerdy, allergy-riddled best friend, a potential love interest in winsome girl-next-door Winnie Cooper (Danica McKellar) and narration by an older, wiser, wittier Kevin (voiced by Daniel Stern) to add perspective to the nostalgia, and you have the perfect recipe for TV greatness.  And, for the next six seasons, America tuned in to follow Kevin’s exploits, as he navigated adolescence in the most memorable of ways.  From 1988 to 1993, The Wonder Years was one of the most popular shows on TV, achieving a spot in the Nielsen Top 30 for four of its six seasons.  And the critical accolades and awards would follow: after only a scant six episodes, the show captured an Emmy® for “Best Comedy Series;” and, at the age of 13, Fred Savage would become the youngest actor ever nominated as “Outstanding Lead Actor for a Comedy Series.”  The series would also go on to win 24 awards (and be nominated for 70 more), including multiple Emmy® Awards, a Golden Globe® and, in 1989, a Peabody® Award for pushing the boundaries of the sitcom format and using new modes of storytelling.  Additionally, in 1997, “My Father’s Office” was ranked #29 on TV Guide’s “100 Greatest Episodes of All Time” and in the 2009 list, the pilot episode was ranked #43.  Suffice it to say, The Wonder Years was one of the most critically lauded sitcoms of the late 80s and early 90s.