nsitive. In a galaxy far, far away there are those who don’t have a lightsaber and need to use a “less civilized” weapon. By “less civilized” I mean a blaster. In the new movie, Rogue One: A Star Wars Story, one of the main characters, Captain Andor (Diego Luna) doesn’t just have 1 blaster he has 2. When there are blasters on the screen you know it is inevitable they will wind up on the shelves of your local toy store.

Nerf makes some great looking dart blasters. They are so futuristic looking that they sometimes show up in television shows or in movies. Basically, we know that Nerf knows blasters. So it is logical that Nerf would get the licenses to make the reproductions from Rogue One. Aside from the funky colors they look nice. And the one I am looking at right now is the Target Exclusive Captain Cassian Andor (Eadu) Deluxe Blaster. This blaster comes with:

The Captain Andor Deluxe Blaster comes in a blue and orange color scheme. If you do not want the deluxe blaster, the base blaster is available in a red/orange color scheme. The base blaster alone retails for $49.99. The Deluxe Blaster retails for a whopping $79.99 which I think is insane. The accessories that come with the blaster such as the scope and stock are not unique and have either been packed with other blasters or in accessory packs. They are not worth the extra money. Though not worth the extra cash really do add to the base blaster. Once it is completely assembled the Captain Andor Deluxe Blaster is 34 inches long.

The Captain Andor Deluxe Blaster is battery operated. The 4 AA batteries don’t just operate the flywheel they also operate the light and sound effects. The lights and sound effects are activated every time the trigger is pulled, which is kind of annoying. I am not sure if it is because of the extra drain on the batteries but the flywheel is a bit weak and the darts do not shoot far. The longest shot was approximately 25ft with short distance of 15ft. Replacing the batteries do not help. 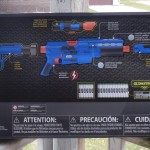 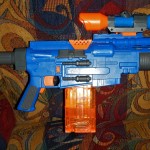 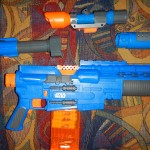 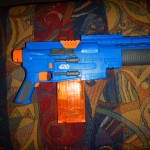 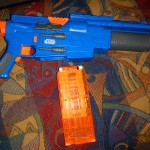 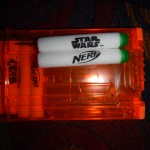 Last year when I reviewed the Stormtrooper rifle I was a bit disappointed and now I find myself disappointed again. The Captain Andor Deluxe Blaster looks great and would be perfect for cosplay but it is not worth the 80 clams. I feel bad not giving it a better review but I can’t say something that isn’t true. There are plenty of Nerf blasters that are better and cost less.

If you really need a Nerf blaster that says, “Star Wars” on the box spend your money on this one but if you want something good purchase something else. Not all Nerf blasters are a bullseye and this one shoots like a Stormtrooper…it misses the mark.