Vids: Check Out the Prologue to ALIEN: COVENANT

Alien: Covenant is the latest installment of the

very popular Alien franchise. The premiere is still a couple of months away but we have a great first look to whet your appetite.  Though there hasn’t been much released on the film as of yet I think it is safe to assume that the crew of the spaceship Covenant encounter some xenomorphs. There is also a really good chance that (spoilers) people are going to die. Personally  I can’t wait for the release.

The Prologue: Last Supper short introduces the crew of the mission. Set aboard the Covenant, a colonization ship on its way to a remote planet to form a new human settlement, the main crew (all couples) and their android, Walter, enjoy one last meal together before cryosleep.

Ridley Scott returns to the universe he created, with ALIEN: COVENANT, a new chapter in his groundbreaking ALIEN franchise.  The crew of the colony ship Covenant, bound for a remote planet on the far side of the galaxy, discovers what they think is an uncharted paradise, but is actually a dark, dangerous world.  When they uncover a threat beyond their imagination, they must attempt a harrowing escape.

Alien: Covenant was conceived by Ridley Scott and 3AM, directed by Luke Scott, and produced by RSA Films. 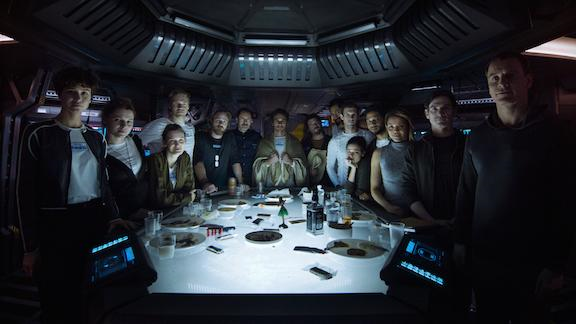