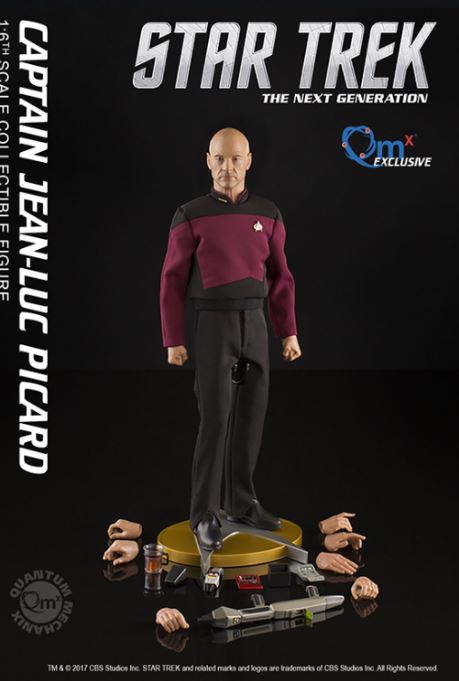 (QMx) has released for pre-ordering the much-anticipated Captain Jean-Luc Picard Master Series 1:6-scale articulated figure. The figure is expected to ship in May.

Our Captain Picard figure has more than 30 points of articulation, allowing him to be displayed in a number of dynamic poses. He features an authentically styled ​ Star Trek: The Next Generation​  uniform with simulated leather boots and detailed 24t century accessories, including a phaser, communicator badge, tricorder, ​ Personal Access Display Device (PADD) and the Captain’s Earl Grey tea cup. He also comes with multiple hands for a variety of poses and gestures.

The Captain Jean-Luc Picard Master Series 1:6-scale articulated figure is one of many Star Trek products QMx will be releasing in 2017. 2017 marks the 30​th​ Anniversary of ​ Star Trek®: The Next Generation.

Based in Los Angeles, Quantum Mechanix Inc. is a creative studio and developer of screen-accurate replicas, collectibles and artwork inspired by entertainment’s most beloved TV shows and movies. We focus on serving the most demanding customers — from dedicated fans to the industry’s most prestigious production companies and studios — with the most detailed and accurate products possible.