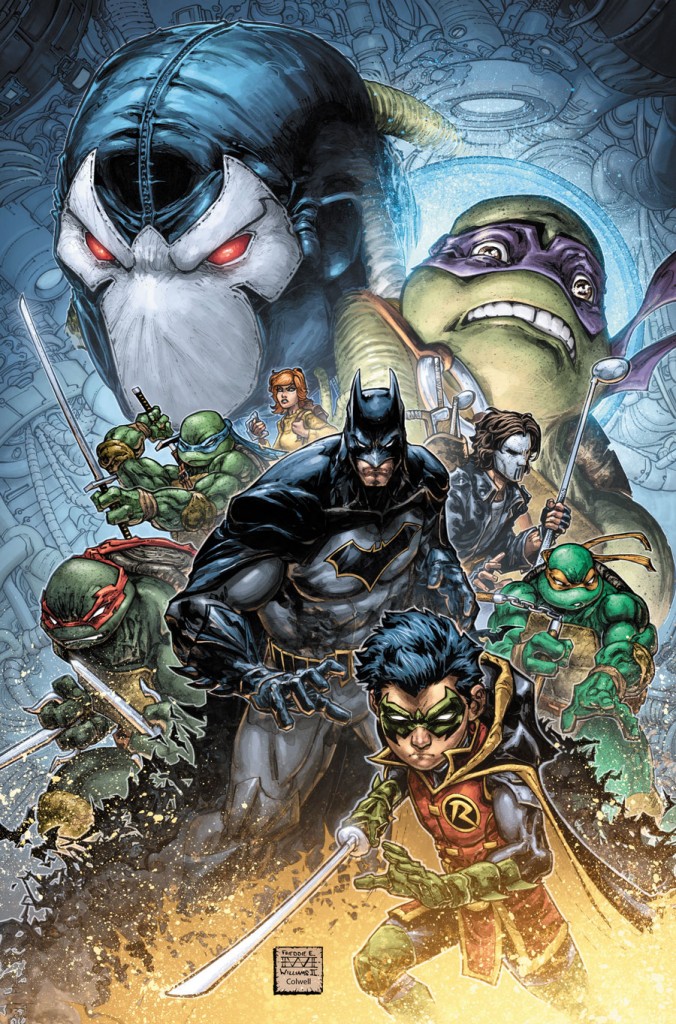 in A Half-Shell this December as DC Entertainment and IDW Publishing today announced plans for BATMAN/TEENAGE MUTANT NINJA TURTLES II, a six-issue follow up to the smash-hit crossover series of 2015. Writer James Tynion IV (BATMAN, DETECTIVE COMICS) and artist Freddie Williams II (HE-MAN/THUNDERCATS) will reunite for this second meeting of two icons of pop culture.

“What DC and IDW started with Batman/TMNT in 2015 continues to spark interest with fans of these characters that have worldwide recognition” said DC SVP Editorial Strategy & Administration, Hank Kanalz. “We can’t wait to see what James and Freddie deliver this time around.”

When Donatello goes looking for a new mentor to help him improve his fighting skills, he opens a doorway to another reality, hoping to summon the Turtles’ one-time ally, Batman. But instead, he gets sent to Gotham City and someone else comes through the open portal-Bane! Suddenly, there’s a new gang boss in New York and he’s out to unite all the other bad guys under him. Can Donnie get back in time and bring Batman with him to help his brothers before Bane causes irreparable destruction?

As an added bonus for fans, the first two issues will release in December before going monthly. Issue #1 hits comics retailers and digital outlets on December 6, with issue #2 following two weeks later on December 20.

“The original crossover between Batman and the Turtles was met with such positive enthusiasm from the fans, that it was only a matter of time before their paths crossed again,” said IDW President and COO, Greg Goldstein. “Fans have themselves to thank for making this a reality, yet again, and we’re confident that we can deliver the goods to meet their expectations with our talented creative team returning for round two.”