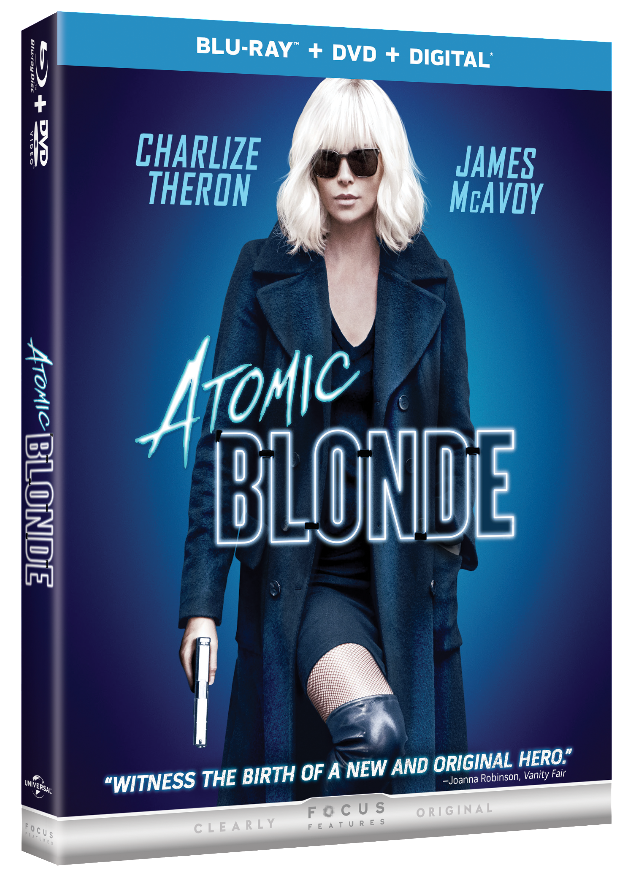 in East Germany, elusive secret agent Charlize Theron (Mad Max: Fury Road, The Fate of the Furious) unleashes a deadly arsenal of skills in ATOMIC BLONDE, the adrenaline pumping, stylish spy-thriller, coming to Digital on October 24, 2017 and 4K Ultra HD, Blu-ray, DVD and On Demand on November 14, 2017, from Universal Pictures Home Entertainment. Adapted from Antony Johnson’s graphic novel, The Coldest City, the explosive film set in the late eighties takes viewers on a high-stakes chase as Theron attempts to escape Berlin. The 4K Ultra HD, Blu-ray, DVD and Digital versions include commentary from the cast, filmmakers, stunt performers and fight coordinators, plus behind-the-scenes features that take viewers inside the making of the film’s intense stunt choreography.

OscarÂ®-winner Charlize Theron stars as elite MI6’s most lethal assassin and the crown jewel of her Majesty’s secret intelligence service, Lorraine Broughton, in ATOMIC BLONDE. When she’s sent on a covert mission into Cold War Berlin, she must use all of the spycraft, sensuality and savagery she has to stay alive in the ticking time bomb of a city simmering with revolution and double-crossing hives of traitors. Broughton must navigate her way through a deadly game of spies to recover a priceless dossier while fighting ferocious killers along the way in this breakneck action-thriller from director David Leitch (Deadpool 2, John Wick).  Theron is joined by James McAvoy (Split, X-Men: First Class), Sofia Boutella (The Mummy, Star Trek Beyond) and John Goodman (Transformers: The Last Knight, Patriots Day) in what critics are calling “best spy movie in years,”-Shawn Edwards, FOX-TV.

Welcome to Berlin-The ultimate setting for a Cold War spy thriller, Berlin becomes a character of its own. Go behind the wall for this making-off.

Blondes Have More Gun-Lorraine Broughton has one impressive set of skills. See what it took for Charlize Theron to fully transform herself into this tenacious character.

Spymaster-David Leitch spins the spy genre on its head through exemplary action sequences and complex characters. Hear from cast and crew what it was like to work with this cutting edge director.

Anatomy of a Fight Scene-Director David Leitch breaks down the incredibly detailed long-take stairwell shot in this anatomy of a fight scene.

Story in Motion: The Chase – Gascoigne is on the run. Find out who’s after him in this motion storyboard.

Atomic Blonde will be available on 4K Ultra HD in a combo pack which includes Ultra HD Blu-ray, Blu-ray and Digital. The 4K Ultra HD will include all bonus features on the Blu-ray disc.

Blu-ray unleashes the power of your HDTV and is the best way to watch movies at home, featuring 6X the picture resolution of DVD, exclusive extras and theater-quality surround sound.

Based on the Oni Press Graphic Novel Series: “The Coldest City”

Atomic Blonde 4K Ultra HD is available in Dolby Visionâ„¢. Leveraging the HDR innovation that powers Dolby’s most advanced cinemas around the world, Dolby Vision transforms the TV experience in the home by delivering greater brightness and contrast, as well as a fuller palette of rich colors.