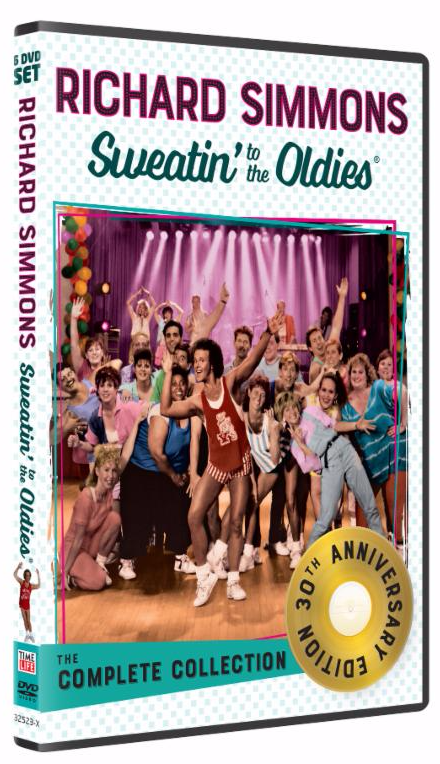 has been helping people lose weight (more than 3,000,000 pounds and counting) and get healthy with his unique enthusiasm, charm and encouragement.  Since opening his first aerobics studio in Beverly Hills in 1974, he has cemented himself in America’s pop-culture psyche with 65 fitness videos (selling over 20 million copies), dozens of infomercials, nine best-selling books, myriad parodies of his over-the-top persona, and seemingly endless TV and film appearances.  And, on October 31, Time Life celebrates the iconic weight loss guru with a landmark DVD release: RICHARD SIMMONS: SWEATIN’ TO THE OLDIES: 30TH ANNIVERSARY EDITION.  The set will be available for $39.95srp, exclusively from Amazon.com.

“So many sparkly tank tops – so many memories.”
— Richard Simmons

Loaded with extras, this special anniversary set also includes 100 minutes of bonus programming featuring an exclusive interview with Richard, testimonials and success stories from Simmons’  students, a full-color 20-page album of rare personal photos and memories personally selected by Richard and a bonus disc of “Love Yourself and Win — Six Steps to Self-Esteem & Permanent Weight Loss.”

Says Simmons’ “I can’t believe it has been 30 years since the beginning! For the first time ever, I have compiled the complete “Sweatin’ to the Oldies” collection…It’s the original and still the best way to get your heart racing and your blood pumping!”

Delivering a serious message with his trademark humor, Simmons has helped millions of overweight men and women lose millions of pounds by adopting sensible balanced eating programs and exercise regimes that are energetic, fun and motivating.  And, since the early ’70s, when he established his innovative weight loss facility where the overweight of the world were welcome with open arms, Simmons has become a pop culture fixture with numerous local and national television and radio appearances including a four-year run on “General Hospital,” followed by his own nationally syndicated, Emmy Award-winning series, “The Richard Simmons Show.”

With the overstuffed holidays coming potentially adding on unwanted pounds, there’s never been a better time to become re-acquainted with one of the best-selling home entertainment fitness series in history with RICHARD SIMMONS: SWEATIN’ TO THE OLDIES: 30TH ANNIVERSARY EDITION.

About Time Life
Time Life is one of the world’s pre-eminent creators and direct marketers of unique music and video/DVD products, specializing in distinctive multi-media collections that evoke memories of yesterday, capture the spirit of today, and can be enjoyed for a lifetime. TIME LIFE and the TIME LIFE logo are registered trademarks of Time Warner Inc. and affiliated companies used under license by Direct Holdings Americas Inc., which is not affiliated with Time Warner Inc. or Time Inc.