Ys VIII: Lacrimosa of Dana is the newest 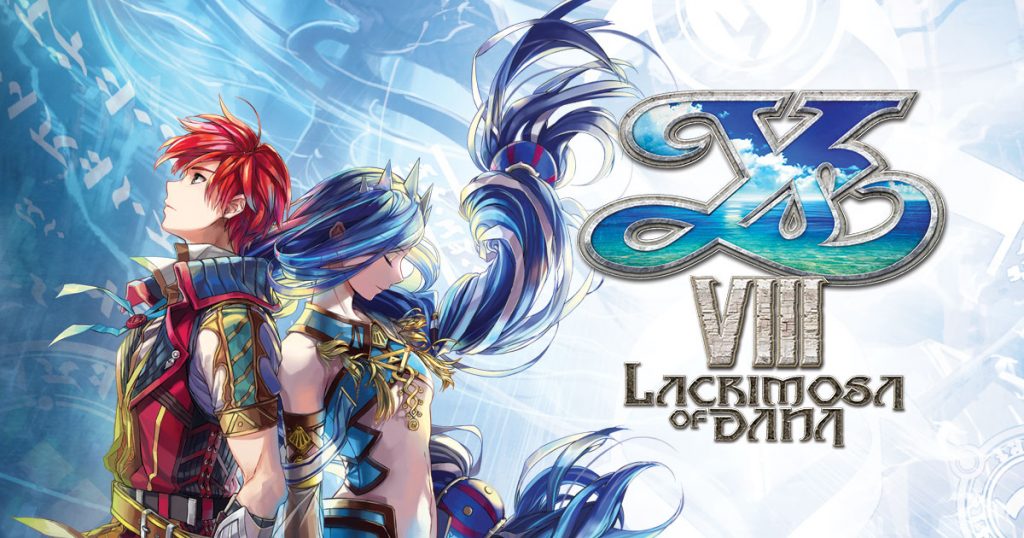 game in the Ys series, a series that has been on handheld game systems for most of its iterations. It has now made the leap from the Playstation Vita to the Playstation 4 as well as the perfect platform for it to appear on, Nintendo Switch. This action RPG is the perfect companion to take on the go or to kick back and explore on the big tv at home.

As the game starts we find the main character Adol as a crew member of a passenger ship Lombardia, sailing from Xandria to Eresia. His friend and long time travel companion Dogi is with him as they travel to their next adventure. Impressed with the dedicated work that Adol is performing for him, the captain, Barbaros takes notice that Adol is more than a simple sailor and spins a tale of the mysterious island they are about to pass named The Isle of Seiren. Any ship that passes too close to the isle sinks for unknown reasons. As luck would have it, the passenger ship is attacked by a giant sea monster and capsized.

Adol wakes up to find himself alone on a shore. It doesn’t take long to put two and two together to figure out that you have washed up on the cursed Isle of Seiren and trot off to see if you are the only survivor. There are other survivors but the isle is wrought with beasts and dangerous animals. There is proof that others have been here before but their bleached skeletons indicate things didn’t go well for them.

Ys’s combat system is hack and slash in real time. You’ll have the ability to dodge attacks from enemies as well as lock onto them if you need help focusing on the target as you jump around the 3d environment. As you level up, new skill attacks will become unlocked and you can customize your combat style to match whatever is needed to defeat your enemies as well as the attack type of the character you are playing.

Your party will consist of up to two other survivors and each will have an attack type that will be useful in defeating the different monster types you will find in the game. For example, a shelled crustacean is more vulnerable to a crushing attack then a piercing attack. There is a fast character swap button so you can always be plaything the character that uses the appropriate attack type without missing a beat during gameplay. The most fun comes when you get to unleash an extra attack. It’s a super powerful skill that is akin to a limit break from the Final Fantasy series of games that will unleash a massively damaging combo on anything that gets caught in its path.

As you explore the island you will find more and more people that will establish an encampment to offer better chances of survival. These people won’t be useless lumps and almost everyone has a special skill that will help you advance in your adventure. One might have the ability to make medicine while another is a blacksmith that will help you improve your weapons and armor. Some will also offer quests to unlock new and useful items. Several areas of the island are blocked off, but you can call the survivors willing to help to clear blockages and reveal new places to explore.

Boss monsters will offer fun challenges and you’ll want to go through areas again and again to collect chests hidden about the area and loot crafting materials from defeated foes. You can even take a moment to go fishing if you find a proper spot. To me, this is normally a waste of time in most games that have it but it’s very useful to participate in fishing when you can. Fishing yields more crafting materials and sometimes will offer treasure chests. As I played through the game I found a random bird named shoebill in my castaway encampment that wanted to be fed different types of fish that can be caught across the island. I was rewarded for sharing what I had with new equipment and recipes for my efforts.

It’s up to you to find as many survivors as you can and find a way to get off of this cursed island. The further you explore the more questions arise. Who was here before you? There is proof that other people have been here before you. Why is Adol plagued with random dreams about a young woman? What is unique about this Isle and how will you ever make it home? You’ll have to play to find out. The switch version will contain all the extra downloadable content that came out with the Playstation and Playstation Vita version as well as 18 costumes to swap out and customize your party with.

1. Graphics (Great) –Vibrant and colorful locals are the highlight of the games visuals as well as the flashy Extra Skill attack moves that provide an excellent animated attack unique to each character that are akin to limit breaks from Final Fantasy VII. It is held back with the environmental details reminding you that this is a port from a lass powerful handheld system.

2. Gameplay (Great) –The exploration mixed with the hack and slash action keep things simple. The island is built well to keep you on track with easily digestible segments of exploration to keep you on track without getting lost while still making it feel like you are in an open world environment. The pacing is good and all of the areas are connected in interesting ways so that you don’t have to waste time backtracking over and over again.

3. Story (Great)-While the story is pretty basic in the beginning, the mystery of Adol’s odd dreams about the blue haired girl will drive you to play for just a little while longer to find out the next clue.

4. Soundtrack (Outstanding)-The voice over work is pretty good. The real star here though is the background music that you will listen to as you hack and slash your way across the unexplored territory of the game. Several tracks sync well with the action being performed on the screen and elicit happy thoughts and feelings as the unique music pumps in the background matching the current areas you are exploring.

5. Replay Value (Great)-You will have many characters to play with and customize in the game. Each one has several skills that you can equip and level up giving them their own unique play style. You can switch them out on the fly but only three characters can make up your party, so you’ll want to play again and see which group makeup is the most fun.
THE BOTTOME LINE: Ys VIII: Lacrimosa of Dana is a great game overall. It’s fun and easy to play for hours on end or for just a few minutes here and there. Fans of the Tales of series will feel right at home and should find this series enjoyable in its own unique style.
Game Rating :(4/5)[Great] Game type:(Action RPG) Game System:(Nintendo Switch) By: (NIS America)(Falcom)

A Big THANK YOU goes out to NIS America for providing a review copy of this game!

Game Score System: Overall Total Value: (Trash)=0-1.5 (Meh)=1.75-2.25 (Good)=2.5-3.25 (Great)=3.5-4.25 (Outstanding)=4.5+
Rating Suggestions:
(Trash): Don’t bother with any form of purchase. This product isn’t worth the effort to purchase it.
(Meh): Not at all impressive. This product isn’t something that should be recommended for most people to enjoy. Flawed or incomplete.
(Good): An average score this product does what it is intended to do and will be worth at least a rent if you are interested in it. A solid item that will be enjoyed if gotten for the right price, usually cheap.
(Great): This product is highly recommended. It is well worth the investment if you are interested in it. You will not be disappointed in a purchase of this item.
(Outstanding): You needed to own two of this product yesterday. Superior quality, going beyond what it was intended to do.