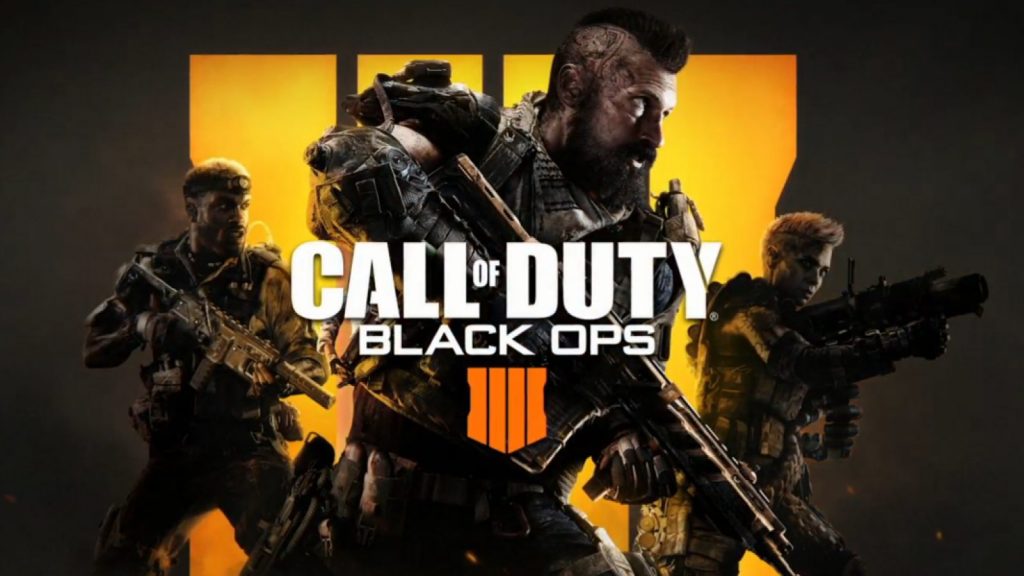 “Call of Duty: Black Ops 4 is packed with an amazing array and a massive amount of content across Multiplayer, Zombies and Blackout, and the launch marks just the beginning of an incredible journey ahead,” said Rob Kostich, EVP and GM, Call of Duty. “When you pick up a Black Ops game, you know you have something you are going to play for a really long time, but Black Ops 4 takes that to an entirely new level. The team’s commitment is clear – no matter what kind of player you are, there is a ton of content to be enjoyed, and there is even more to come for everyone in the community. Black Ops 4 is unlike anything Treyarch has ever created and we think fans are going to have a blast.”

“We revealed playable Multiplayer earlier than ever, put in more Zombies available on day one than any other game, held two Betas, and along the way the response from the Black Ops community has been nothing short of incredible,” said Dan Bunting, Co-Studio Head, Treyarch. “Our mission was to build a game from the ground up that allowed fans to have fun together and play with one another in new ways – that’s just what we did, and the launch of Black Ops 4 is just the start. This is a game that we plan to support for the long haul.”

“The ambition driving the studio’s efforts doesn’t end there however; in fact, it’s been a colossal endeavor: from creating a signature take on battle royale with Blackout, to going all-out on PC with Beenox and working with Blizzard to bring the game to Battle.net for the first time, we pushed ourselves more than any game we’ve ever made. We feel that says something and we believe that it shows,” said Mark Gordon, Co-Studio Head, Treyarch. “We’ve been developing Black Ops games for ten years now, and I’ve never seen the studio create anything on this scale before.”

Call of Duty: Black Ops 4 features three distinct modes of play: Multiplayer, Zombies and Blackout. Multiplayer features gritty, grounded combat in the most tactical, team-based experience in the Black Ops series to date. It features the return of the iconic Pick 10 system, along with a series of innovations in weapon controls, combat flow, health regeneration, and player movement. Black Ops 4 also features a combination of new and returning Specialists, each with their own unique equipment and playstyles, allowing players to not only be powerful alone, but devastating as a team working together. 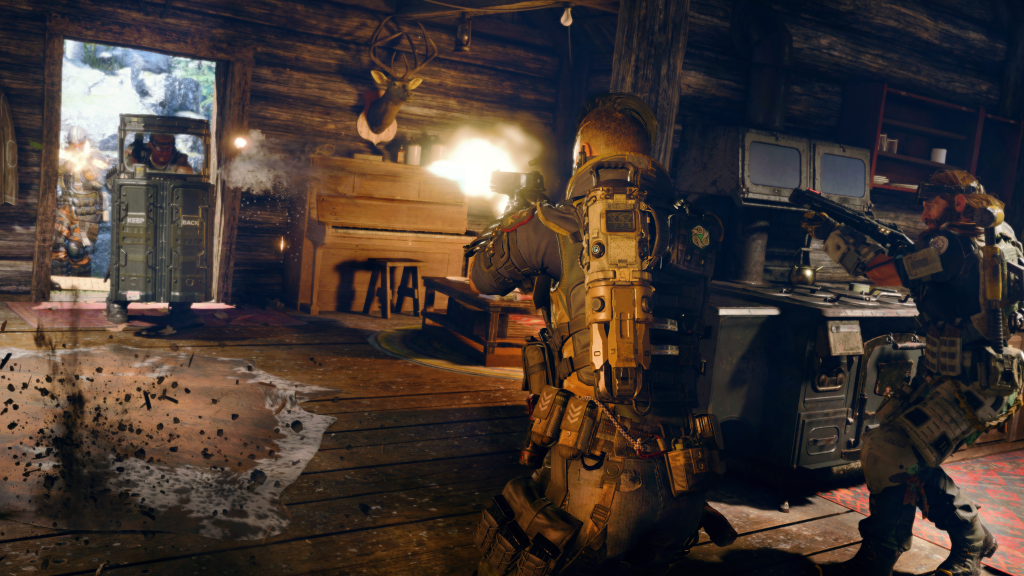 Celebrating the 10-year anniversary of the original Call of Duty Zombies, Call of Duty: Black Ops 4 debuts an entirely new Zombies experience that is the biggest Day One offering in franchise history, with three fully-featured Zombies experiences at launch – IX, Voyage of Despair and Blood of the Dead. With the most customizable action to date, the mode introduces new systems for creating and completing community challenges, and social systems designed to connect players.

Call of Duty: Black Ops 4 introduces Blackout, an all-new Battle Royale mode that brings together characters, locations, weapons and gear from across the series in all-out survival combat, all with Black Ops signature gameplay. Blackout features land, sea and air vehicles, and offers a variety of new and classic playable characters, including campaign characters like Mason, Reznov and Woods; Zombies characters like Richtofen and Takeo; and Specialists like Crash, Battery and Seraph, to name a few. Across the sprawling Blackout map – the largest in Call of Duty history – players will fight in locations inspired by fan-favorite maps like Nuketown, Firing Range, Raid, Cargo and more.

The release of Call of Duty: Black Ops 4 also heralds the biggest season to date in Call of Duty esports with $6 million in total season prizing on the line. The Call of Duty World League will get underway with the first open LAN event of the new season, Dec. 7 – 9, in Las Vegas. For more information, visit CallofDuty.com/CWL.

In conjunction with the release of Call of Duty: Black Ops 4, the Call of Duty™ Endowment has kicked-off the #CODNATION Challenge, a live three-day charity event featuring Black Ops 4. Formerly known as the Race to Prestige, the annual stream brings together an array of video game personalities in a relay-style, fundraising gaming marathon. Across its nine-year history, the Call of Duty community has been instrumental in supporting the Endowment’s drive to place 50,000 veterans in high-quality jobs. The #CODNATION Challenge kicked-off yesterday and continues through tomorrow. Fans can watch all the action live on Twitch.tv/TheRace and follow @CODE4Vets for the latest updates and information for the #CODNATION Challenge.

Additionally, launch is just the beginning for Call of Duty: Black Ops 4, which will feature a steady stream of post-release content across all modes, and a variety of free content for the entire community through a robust calendar of events, playable first on PlayStation 4.

Call of Duty: Black Ops 4 comes in the following editions:

**Black Ops Pass (BOP) content is not final, is subject to change, and may not include all downloadable content available for the game. BOP content may not be available in all countries, and pricing and release dates may vary by platform. BOP content should be downloaded from the in-game store only; do not purchase separately, or you will be charged again. BOP content may be sold separately.

Activision Blizzard Consumer Products Group (ABCPG) is offering the Call of Duty community exciting new ways to interact with the brand through new global partnerships. Fans can celebrate the return of Black Ops with new premier collaborations with Supra, BAIT, and Hype, and an exclusive in-store only program with retailer Primark, in addition to existing collaborations with McFarlane and ABCPG’s first ever line of Activision Collectibles. Enthusiasts can also purchase exclusive apparel, collectibles and footwear from major and select retailers globally.

Call of Duty: Black Ops 4 is published by Activision and developed by Treyarch with additional development support from Raven Software and PC development with Beenox. For the latest intel check out: www.callofduty.com, www.youtube.com/callofduty and follow @CallofDuty and @Treyarch on Twitter, Instagram and Facebook. Call of Duty: Black Ops 4 is available on PlayStation®4 system, Xbox One, and PC exclusively on Blizzard Battle.net®. The game is rated M for Mature (Blood and Gore, Drug Reference, Intense Violence, Strong Language).

About Blizzard Entertainment
Best known for blockbuster hits including World of Warcraft®, Hearthstone®, Overwatch®, the Warcraft®, StarCraft®, and Diablo® franchises, and the multi-franchise Heroes of the Storm®, Blizzard Entertainment, Inc. (www.blizzard.com), a division of Activision Blizzard (NASDAQ: ATVI), is a premier developer and publisher of entertainment software renowned for creating some of the industry’s most critically acclaimed games. Blizzard Entertainment’s track record includes twenty-one #1 games† and multiple Game of the Year awards. The company’s online gaming service is one of the largest in the world, with millions of active players.

About Activision
Headquartered in Santa Monica, California, Activision is a leading global producer and publisher of interactive entertainment. Activision maintains operations throughout the world and is a division of Activision Blizzard (NASDAQ: ATVI), an S&P 500 company. More information about Activision and its products can be found on the company’s website, www.activision.com or by following @Activision.

ACTIVISION, CALL OF DUTY, and CALL OF DUTY BLACK OPS are trademarks of Activision Publishing, Inc. All other trademarks and trade names are the properties of their respective owners.

“PlayStation” is a registered trademark and “PS4” is a trademark of Sony Computer Entertainment Inc.