Vids: How to Train Your Dragon: The Hidden World Coming to Digital This Month and Blu-ray in May 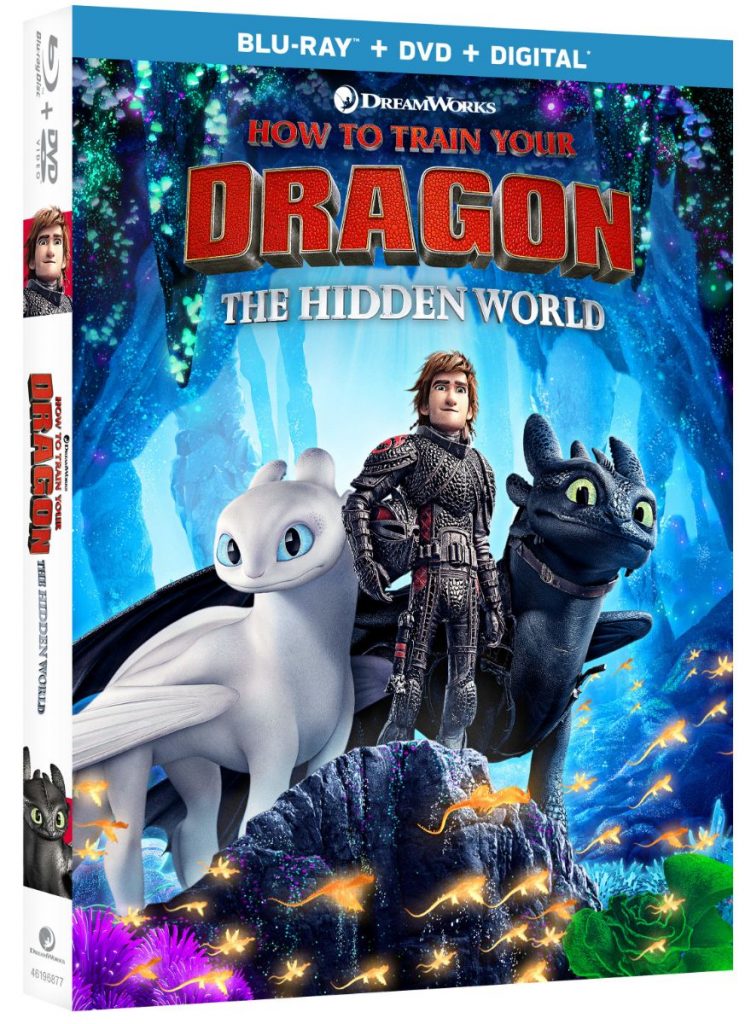 wowed audiences around the world, Hiccup and Toothless return to captivate fans with an adventure of a lifetime in DreamWorks Animation’s HOW TO TRAIN YOUR DRAGON: THE HIDDEN WORLD. The final quest from Dean DeBlois’ (Lilo & Stich, How to Train Your Dragon trilogy) arrives on Digital and via the digital movie app MOVIES ANYWHERE on April 30, 2019 and on 4K Ultra HD, Blu-ray™, DVD, and On Demand May 21, 2019 from Universal Pictures Home Entertainment. Hailed as “the perfect conclusion to one of the best animated trilogies of all time” (Scott Menzel, We Live Entertainment) and certified fresh on Rotten Tomatoes®, the film opened at #1 in over 40 markets. The 4K Ultra HD, Blu-ray™, DVD and Digital versions feature over an hour of exclusive behind-the-scenes bonus content including an alternate opening, two DreamWorks animated shorts, deleted scenes and more.

To mark the film’s global 4K Ultra HD, Blu-rayTM and DVD release, Universal has partnered with Facebook and Messenger to debut two exclusive adorable Night Lights (baby dragons) to train and an awe-inspiring in-store Augmented Reality (AR) experience. In pack, fans can unlock an exclusive code that reveals your very own Night Light that you can hatch, train, and send on adventures within the popular Dragon Pets Instant Game available on Facebook and Messenger. Additionally, participating retailers around the world will unveil in-store displays that trigger a visually stunning AR adventure bringing Toothless and Light Fury to flight! Both the in-home and in-store experiences are compatible with iOS and Android devices, and users should download the latest version of the Facebook and Messenger apps.

What began as an unlikely friendship between an adolescent Viking and a fearsome Night Fury dragon has become an epic trilogy spanning their lives. In this next installment, the heroic pair finally fulfill their destinies; Hiccup (Jay Baruchel) as the village chief and ruler of Berk alongside Astrid (America Ferrera), and Toothless as the dragon leader of his own kind. As the Vikings and dragons of Berk face their darkest threat yet, the evil Grimmel (F. Murray Abraham), and Toothless discovers his soulmate, Light Fury – the bonds of Hiccup and Toothless’ friendship are tested like never before.

The all-star voice cast behind all of the beloved characters from the previous films returns with Jay Baruchel (The Sorcerer’s Apprentice, This Is the End), America Ferrera (“Superstore,” The Sisterhood of the Travelling Pants), Cate Blanchett (The House with a Clock in Its Walls, Ocean’s Eight), Gerard Butler (300, The Bounty Hunter), F. Murray Abraham (Isle of Dogs, The Grand Budapest Hotel), Kit Harington (“Game of Thrones”), Craig Ferguson (Brave), Kristen Wiig (Despicable Me 3, Ghostbusters), Jonah Hill (The Lego Movie franchise, 21 Jump Street) and Christopher Mintz-Plasse (Trolls, This is the End).

DreamWorks Shorts:
Bilby – Directed by Liron Topaz, Pierre Perifel and JP Sans; produced by Jeff Hermann and Kelly Cooney Cilella. Threatened daily by the deadly residents and harsh environment of Australia’s Outback, a lonesome Bilby finds himself an unwitting protector, and unexpected friend, to a helpless (and quite adorable) baby bird.

Bird Karma – Directed by William Salazar and produced by Jeff Hermann, the beautifully artistic 2D short film Bird Karma tells a delightfully lyrical and fully unexpected tale of a long-legged bird’s journey of blissful joy, inescapable greed and the accidental discovery of the consequences when too much is not enough.

How to Voice Your Viking – Go behind the scenes with the cast as they record the Viking voices of HOW TO TRAIN YOUR DRAGON: THE HIDDEN WORLD.
Creating an Epic Dragon Tale – Discover what filmmakers learned while crafting this epic dragon trilogy.

How I Learned from Dragons – The diverse cast of characters reveal why they think the dragon trilogy is so special.

The Dragon Sheep Chronicles – Protecting sheep from the dragons of Berk is no easy task but Hiccup has a plan.

A Deck of Dragons – Observe four new dragons as Fishlegs unveils his original deck of dragon trading cards.
Growing Up with Dragons – After years of being with these characters, hear the lasting effects of the dragon trilogy from the filmmaker’s perspective.

The Evolving Character Design of Dragons – Cast and crew reveal what it was like to evolve not only the characters of HOW TO TRAIN YOUR DRAGON: THE HIDDEN WORLD, but themselves as well.

Drawing Dragons – Get a glimpse of what goes in to designing a DreamWorks dragon.
Epic Villain – A different kind of villain, Grimmel brings great challenges to the village of Berk. Go behind the scenes as filmmakers breakdown this epic character.

Astrid’s Whole Dragon Trilogy in 60 Seconds – Hold on tight as Astrid sums up the whole dragon trilogy in a legendary 60 seconds.

Welcome to New Berk – With Hiccup as your guide, get a firsthand look at the updated Viking village of New Berk.

HOW TO TRAIN YOUR DRAGON: THE HIDDEN WORLD will be available on 4K Ultra HD, Blu-rayTM, DVD and Digital.
4K Ultra HD is the ultimate movie watching experience. 4K Ultra HD features the combination of 4K resolution for four times sharper picture than HD, the color brilliance of High Dynamic Range (HDR) with immersive audio delivering a multidimensional sound experience.

Blu-rayTM unleashes the power of your HDTV and is the best way to watch movies at home, featuring 6X the picture resolution of DVD, exclusive extras and theater-quality surround sound.

MOVIES ANYWHERE is the digital app that simplifies and enhances the digital movie collection and viewing experience by allowing consumers to access their favorite digital movies in one place when purchased or redeemed through participating digital retailers. Consumers can also redeem digital copy codes found in eligible Blu-rayTM and DVD disc packages from participating studios and stream or download them through Movies Anywhere. MOVIES ANYWHERE is only available in the United States. For more information, visit https://moviesanywhere.com.