Soundwaves: The Score for the Amazon Prime Series Carnival Row is Now Available for Download 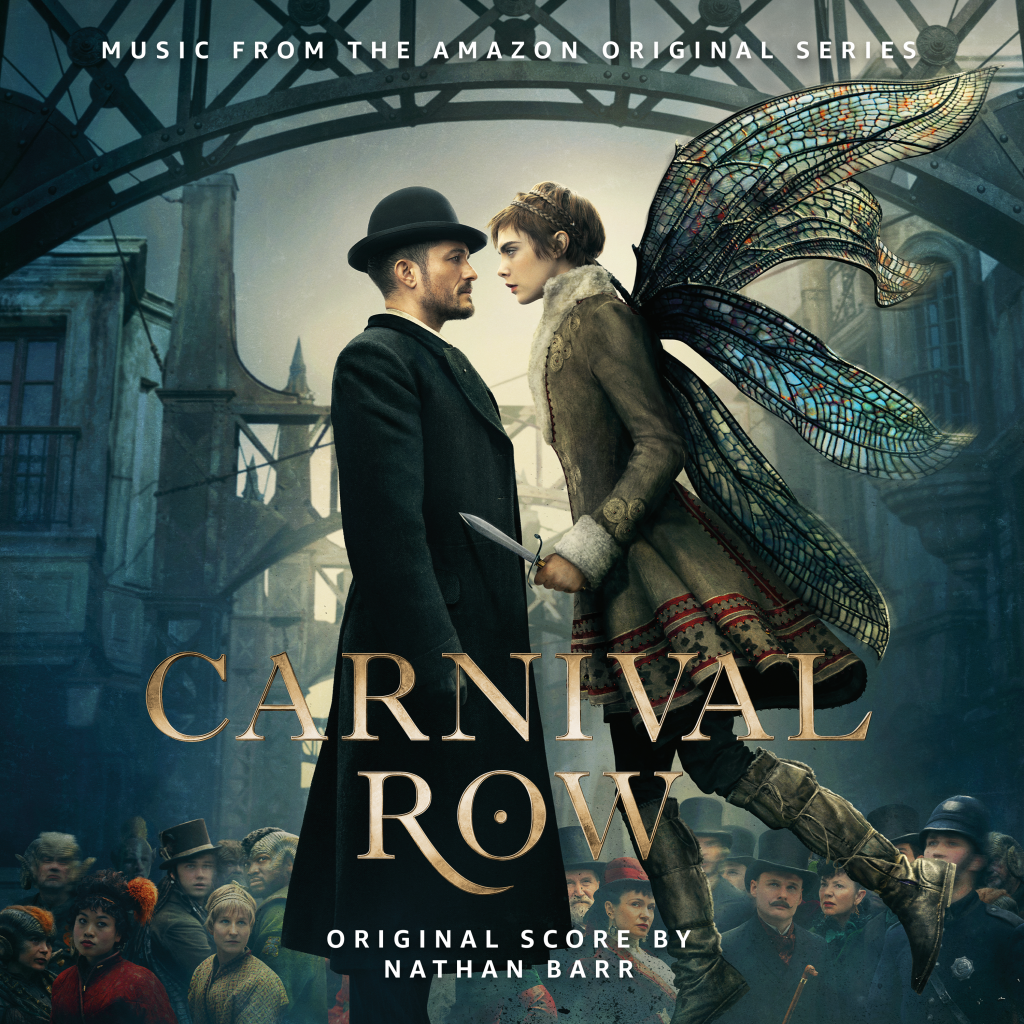 Studios announced the release of the CARNIVAL ROW (ORIGINAL SOUNDTRACK) with score by Emmy Award nominee Nathan Barr (True Blood, The Americans, The House with a Clock in its Walls) and two original songs by German musician Patty Gurdy, now available in digital stores and on streaming platforms. The soundtrack features music from Season One of the hit neo-Victorian fantasy television series starring Orlando Bloom (Pirates of the Caribbean) and Cara Delevingne (Suicide Squad), now streaming on Amazon Prime Video.

“Getting to explore the world of Carnival Row as a composer is among my most exciting musical adventures to date,” said Barr. “At its core, the score is heavily thematic and explores themes of identity, love, loss and magic in a fantastical world from the past. Sometimes choral, sometimes orchestral, the music also plugs into the steam punk world so beautifully realized on screen with a variety of unusual musical instruments including a human bone trumpet, a century old Wurlitzer pipe organ, and several instruments of my own creation including a High Pressure Stout-O-Phone and a Sympathetic Drone Cello with 19 strings.”

“When I received the request to work on Carnival Row, I thought at first that it might be spam mail, but I quickly realized what an amazing request I just received,” said Gurdy. “I wrote several fairy-themed songs, and two were used prominently throughout the first season. The two songs were written for the character Aisling Querelle, who used to be a famous singer in the fairy world Tirnanoc. Using my interest in Irish legend, I got completely captured in my own imaginary highland fairy-landscapes, which made it strangely natural for me to write from the perspective of such a magical and feminine character. I am so flattered to have the chance to work on this amazing production. The world of Carnival Row is truly breathtaking.”

ABOUT THE SHOW:
Orlando Bloom (Pirates of the Caribbean) and Cara Delevingne (Suicide Squad) star in Carnival Row, a series set in a Victorian fantasy world filled with mythological immigrant creatures whose exotic homelands were invaded by the empires of man. This growing population struggles to coexist with humans—forbidden to live, love, or fly with freedom. But even in darkness, hope lives, as a human detective, Rycroft Philostrate (Bloom), and a refugee faerie named Vignette Stonemoss (Delevingne) rekindle a dangerous affair despite an increasingly intolerant society. Vignette harbors a secret that endangers Philo’s world during his most important case yet: a string of gruesome murders threatening the uneasy peace of the Row.

Carnival Row is from Amazon Studios and Legendary Television, with Executive Producers Marc Guggenheim (Arrow, Eli Stone), René Echevarria (Star Trek, Teen Wolf, Castle, Medium), Jon Amiel (Outsiders), Bloom, and Travis Beacham (Pacific Rim, Clash of the Titans). Beacham’s A Killing on Carnival Row, on which the project is based, appeared on the very first installment of the Hollywood Blacklist in 2005.

In addition to writing his scores, Nathan performs many of the instruments heard in his compositions and is skilled in many styles ranging from orchestral to rock. He is known for his collection and inclusion of rare and unusual instruments from around the world, such as a human bone trumpet from Tibet, dismantled pianos, a rare Glass Armonica, and gourd cellos. The gem of his collection is a 3 manual, 19 rank Wurlitzer Theater Organ with 1,366 pipes. The organ lived on the scoring stage at 20th Century Fox from 1928-1998 and can be heard in dozens of scores by legendary composers such as Bernard Herrmann, Alex North, Jerry Goldsmith, and John Williams. It is now the centerpiece of Nathan’s newly constructed Bandrika Studios, an 8,000 sq ft scoring stage and recording facility conceived by Nathan as a permanent home for this history-rich instrument. Featured in Variety and The Wall Street Journal, Bandrika has already established itself as a world-class recording space and a part of Barr’s increasingly unique palette.

ABOUT PATTY GURDY:
A few years ago, German folk musician Patty Gurdy fell in love with the medieval instrument called the “hurdy-gurdy.” The unique sound of this central-European instrument is created by a wheel that bows onto several mechanically keyed melody strings, as well as drone and rhythm strings. Gurdy’s passionate voice is the core of her music, which she showcases on her new album Pest & Power (2019), as well as countless videos on her YouTube channel.

ABOUT LEGENDARY TELEVISION STUDIOS:
The studio’s roster includes: the reboot of the classic family adventure series LOST IN SPACE for Netflix; CARNIVAL ROW, a fantasy noir drama starring Orlando Bloom and Cara Delevingne, for Amazon; DUNE: THE SISTERHOOD, based on one of the most popular science fiction franchises of all time, for HBO Max; two seasons of PACIFIC RIM, an original anime series expanding the story of the first two live action movies, for Netflix; CONSOLE WARS, based on Blake J. Harris’ best-selling novel, for CBS All Access; and PAPER GIRLS, based on Brian K. Vaughan’s best-selling graphic novel, for Amazon. Past series include the science-fiction drama COLONY, co-created by Carlton Cuse; Hulu’s critically acclaimed THE LOOMING TOWER; and LOVE, a relationship comedy from Judd Apatow now exclusively available on Netflix. To learn more visit: www.legendary.com