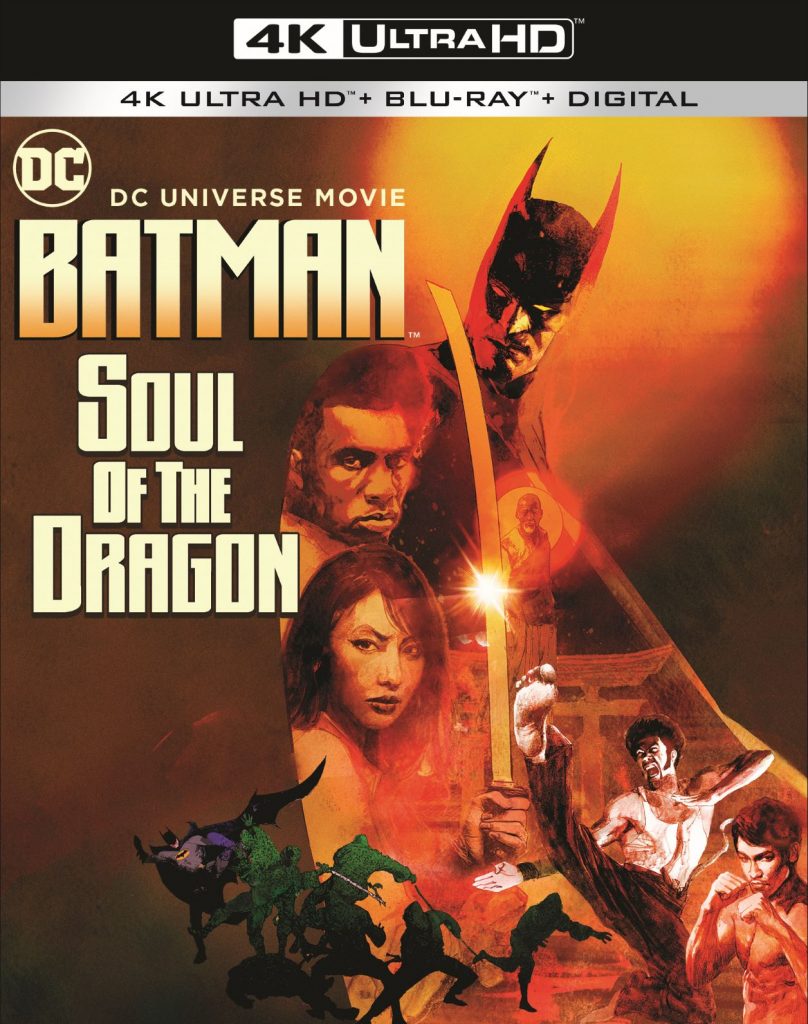 takes the Dark Knight back to the 1970s for a supernatural-laden martial arts extravaganza in Batman: Soul Of The Dragon, the next entry in the popular series of the DC Universe Movies. Produced by Warner Bros. Animation and DC, the feature-length animated film will be released by Warner Bros. Home Entertainment on Digital starting January 12, 2021, and on 4K Ultra HD Blu-ray Combo Pack and Blu-ray on January 26, 2021. The film is rated R for some violence.

Set in the midst of the swinging 1970s, this Elseworlds adventure finds Bruce Wayne training under a master sensei. It is here that Bruce, along with other elite students, is forged in the fire of the martial arts discipline. The lifelong bonds they form will be put to the test when a deadly menace arises from their past. It will take the combined efforts of Batman, world-renowned martial artists Richard Dragon, Ben Turner and Lady Shiva, and their mentor O-Sensei to battle the monsters of this world and beyond!

Batman: Soul Of The Dragon will also be available on Movies Anywhere. Using the free Movies Anywhere app and website, consumers can access all their eligible movies by connecting their Movies Anywhere account with their participating digital retailer accounts.

Movies Anywhere is a digital movie platform that enables movie fans to discover, access, and watch their favorite digital movies in one place. Movies Anywhere brings together a library of nearly 7,500 digital movies from Sony Pictures, Twentieth Century Fox Film, The Walt Disney Studios (including Disney, Pixar, Marvel Studios and Lucasfilm), Universal Pictures (including DreamWorks and Illumination Entertainment) and Warner Bros., and will continue to expand the consumer experience as more content providers, digital retailers and platforms are added. By connecting participating digital retailers that include Amazon Prime Video,  the Apple TV app, FandangoNOW, Google Play, and Vudu, movie fans can now bring together their digital movie collections (whether purchased or redeemed) in one place and enjoy them from the comfort of their living rooms, and across multiple devices and platforms, including Amazon Fire devices; Android devices and Android TV; Apple TV, iPhone, iPad and iPod touch; Chromecast; Roku® devices and popular browsers. Movie fans can also redeem digital codes found in eligible Blu-ray and DVD disc packages from participating studios and enjoy them through Movies Anywhere. Movies Anywhere – your movies, together at last.

Digital movies or TV episodes allow fans to watch a digital version of their movie or TV show anywhere, on their favorite devices. Digital movies or TV episodes are included with the purchase of specially marked Blu-ray discs. With digital, consumers are able to instantly stream and download movies and TV shows to TVs, computers, tablets and smartphones through retail services. For more information on compatible devices and services go to wb.com/digitalmoviefaq. Consult a digital retailer for details and requirements and for a list of digital-compatible devices.

Rated R for some violence

DC is one of the largest English-language publishers of comics and graphic novels in the world and home to some of the most iconic and recognizable characters ever created. As a creative unit of Warner Media, DC is charged with strategically integrating its stories and characters across film, television, consumer products, home entertainment, interactive games and the DC Universe subscription streaming service. For more information visit dccomics.com.

BATMAN and all related characters and elements are TM and © DC.  © 2021 Warner Bros. Entertainment Inc.