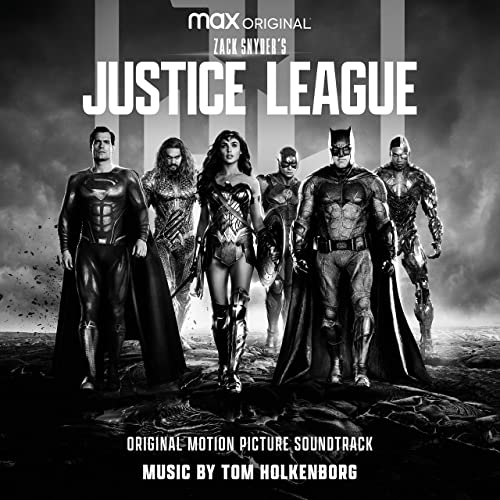 this month the release of Zack Snyder’s Justice League (Original Motion Picture Soundtrack), which features a completely brand-new score to accompany Snyder’s vision for the film, created by Grammy nominated multi-platinum producer, musician, composer and educator Tom Holkenborg, aka Junkie XL (Mad Max: Fury Road, Deadpool, the upcoming Godzilla Vs. Kong). The album features Holkenborg’s music from Zack Snyder’s Justice League, the film in which, determined to ensure Superman’s (Henry Cavill) ultimate sacrifice was not in vain, Bruce Wayne (Ben Affleck) aligns forces with Diana Prince (Gal Gadot) with plans to recruit a team of metahumans to protect the world from an approaching threat of catastrophic proportions. Now united, Batman (Affleck), Wonder Woman (Gadot), Aquaman (Jason Momoa), Cyborg (Ray Fisher) and The Flash (Ezra Miller) may be too late to save the planet from Steppenwolf, DeSaad and Darkseid and their dreadful intentions.

The soundtrack to Zack Snyder’s Justice League also includes 2 songs used in the film. Opening the soundtrack is a stunning version of “Song To The Siren” performed by Rose Betts, a singer-songwriter with an uncanny ability to pen beautiful hooks and lyrics with a depth beyond her years; and closing the soundtrack is a striking take on “Hallelujah” by the prolific Allison Crowe, who, since 2001, has released 26 albums, singles, EPs and compilations, primarily via her own label – creating more than 200 unique tracks which embrace roots, rock, Celtic, folk, jazz, soul, Canadiana and Broadway and bridging tradition with inventive exploration.

Zack Snyder’s Justice League will be made available worldwide day and date with the US HBO Max debut on THURSDAY, MARCH 18 (*with a small number of exceptions). The feature film will be available internationally to rent, buy, stream or watch via HBO services, local TV providers, or a range of digital platforms. And the soundtrack releases worldwide the same day.

Tom Holkenborg calls Zack Snyder’s Justice League (Original Motion Picture Soundtrack) his “Mount Everest of Scores.” Indeed, the album’s nearly 4 hours of music showcases his colossal output on a project which was a massive and deeply personal undertaking for him, given his and Zack Snyder’s years-deep connection on the film. The two worked together on Snyder’s original musical vision for the film in 2016; and have now come back together to see that vision come to fruition.

“Scoring Zack Snyder’s Justice League has been a project like no other in my career,” explains the composer. “It’s a four-and-a- half-hour movie. I wrote so much music! The score is, at times, fully electronic, and at other times fully orchestral. It included many global elements, rock and even trap. And it was all written during Covid, so it was an incredibly hands on, isolated and intense experience; and I think that comes out in the score. This project demanded so much on so many levels, and all of us involved owed it to the fans and Zack to give it everything we had.”

Unquestionably, the album does showcase the best of Tom Holkenborg, who was inspired to put everything he had into the opus. The soundtrack highlights his full spectrum as a composer, and draws on his experience as a rock producer, electronic music producer, his world music collaborations, and love of classical orchestration and classical film scoring. Yet even with that wide ranging stylistic mix, this body of work brilliantly illuminates a passionate cohesiveness amidst a more aggressive and more dramatic offering than anything the composer has previously put forth.

Tom Holkenborg, aka Junkie XL, is a Grammy nominated multi-platinum producer, musician, composer and educator whose versatility puts him on the cutting edge of contemporary music, and whose thirst for innovation is helping to reimagine the world of composition.

A Full Contact Composer, Holkenborg is hands on at every stage of the composing process, a multi-instrumentalist who combines a mastery of studio engineering, classical musical training and an innate sense of curiosity. He’s as adept working with a 50 piece philharmonic orchestra as he is with a wall of modular synths, playing a bass guitar or building his own physical and digital instruments. His drive to reimagine what’s possible and share that knowledge with the next generation of composers is what makes Holkenborg a unique force, and one of the most in-demand film composers in the world.

Tom’s film scoring credits have grossed over $2 billion at the box office and include Mad Max: Fury Road, Deadpool, Black Mass, Alita Battle Angel, Divergent, Brimstone, The Dark Tower, Tomb Raider, Terminator: Dark Fate, the record setting Sonic the Hedgehog and the forthcoming projects The 355, Justice League: The Snyder Cut, Godzilla vs Kong and Army Of The Dead. He has worked with directors including Peter Jackson, Robert Rodriguez, James Cameron, George Miller, Christopher Nolan, Zack Snyder and Tim Miller among many others.

An educator as well as a creator, Tom is committed to breaking down the barriers of entry in the world of film composition, creating the free SCORE Academy program in Los Angeles and a music composition program at the ArtEZ conservatorium in his home country of the Netherlands. On YouTube, Tom hosts his educational series StudioTime, which is available for free and has been watched millions of times.

Tom is able to draw on his extensive knowledge of classical forms and structures while keeping one finger planted firmly on the pulse of popular music. When his eclectic background is paired with his skill as a multi-instrumentalist (he plays keyboards, guitar, drums, violin, and bass) and a mastery of studio technology, a portrait emerges of an artist for whom anything is possible. Outside of his own artistry Tom’s desire to marry technology and classical composition to initiate change and evolution led him to partner with Orchestral Tools in 2019 to create Junkie XL Brass, his first sample library, making world-class sounds available to composers everywhere.

The foundation for Tom’s work in film started in his native Holland, where he created multiple film scores, before undertaking mentorships with celebrated composers Harry Gregson Williams and Hans Zimmer, with whom he worked on projects like Inception, Batman vs Superman and Dark Knight Rises. Tom’s partnership with Hans was formative, enabling him to hone his own voice and style while learning from one of Hollywood’s most influential composers. Tom’s own Hollywood journey really started to take flight in 2014 with his first major solo project, and the first of his many collaborations with Zack Snyder, 300: Rise Of An Empire. It was the beginning of a scoring schedule that has netted billions of box office dollars, included blockbusters and indie projects, seen Tom work with some of Hollywood’s most lauded directors, and kept him jam packed ever since.

Holkenborg’s music career began in 1993 when he started the industrial rock band Nerv and was also producing hardcore and metal bands like Sepultura and Fear Factory. Drawn by electronic breakbeats he started Junkie XL in 1997 debuting with the album Saturday Teenage Kick. Holkenborg went on to produce five more albums under the Junkie XL moniker while playing headline shows all over the world. In 2002 the producer remixer scored a number 1 chart hit in 24 countries with his rework of “A Little Less Conversation”. Following its success Holkenborg collaborated with celebrated artists like Dave Gahan, Robert Smith, Chuck D, and remixed artists such as Coldplay, Depeche Mode, Britney Spears, Justin Timberlake and many more. In addition Holkenborg created the music for video games like FIFA, Need For Speed, The Sims, and SSX and commercials for global campaigns like Nike, Heineken, Adidas, Cadillac and VISA.