WaterTower Music is pleased to announce 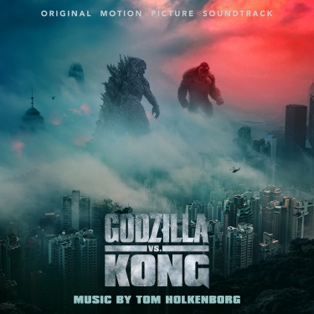 today’s release of the soundtrack to Warner Bros. Pictures’ and Legendary Pictures’ epic adventure “Godzilla vs. Kong,” the long-awaited showdown between two icons in the feature directed by Adam Wingard. Godzilla vs. Kong (Original Motion Picture Soundtrack) features 15 new tracks created for the film by Grammy-nominated composer Tom Holkenborg, aka Junkie XL (Mad Max: Fury Road, Deadpool, Zack Snyder’s Justice League). The album is now available, a few days before the March 31 nationwide release of the film in 2D and 3D in select theaters and IMAX. In the U.S. It will be available on HBO Max for 31 days from theatrical release.

Tom Holkenborg is abundantly clear about his passion for the project. “I’m a huge fan of Godzilla and Kong! I’ve watched over 35 Godzilla movies over the years, so geeking out with Adam over this film came naturally,” explained the composer. “Kong is such an iconic character with over 90 years of scoring history behind him, and this was a perfect project for me to flex the retro monster orchestral scoring side of my brain, mixed with my very contemporary electronic side – in this case `80s sequences and basslines in the vein of John Carpenter. In this score I am trying to emphasize the insanity of Godzilla and the humanity of Kong. In the spirit of the film, it was fun to get my mad scientist coat on and make some monstrous sounds!”

Holkenborg’s unique approach to scoring blends historical understanding of classical scoring technique with an embrace of cutting-edge technology. His artistic choice for Godzilla’s music sees the composer embracing his modern roots, leaning towards a robotic, all electronic score. While his take on Kong is a deep dive into the history of this monster’s score – the previously referenced 90 years of scoring history – combined with sourcing rare instrumentation like stone flutes and marimbas. Tom sampled a custom made 6ft mega bass drum and the biggest bass amp in the world – a 13-foot-tall amp designed by lengendary bass amp maker Ampeg – to give the score its monstrous elements.

Godzilla vs. Kong (Original Motion Picture Soundtrack) is now available, and the track list is as follows. All music by Tom Holkenborg.

Legends collide in “Godzilla vs. Kong” as these mythic adversaries meet in a spectacular battle for the ages, with the fate of the world hanging in the balance. Kong and his protectors undertake a perilous journey to find his true home, and with them is Jia, a young, orphaned girl with whom he has formed a unique and powerful bond. But they unexpectedly find themselves in the path of an enraged Godzilla, cutting a swath of destruction across the globe. The initial confrontation between the two Titans—instigated by unseen forces—is only the beginning of the mystery that lies deep within the core of the Earth.

Warner Bros. Pictures and Legendary Pictures Present a Legendary Pictures Production, A Film By Adam Wingard, “Godzilla vs. Kong.” The film will be released nationwide in 2D and 3D in select theaters and IMAX on March 31, 2021 and will be available in the U.S. on HBO Max for 31 days from theatrical release. It is rated PG-13 for intense sequences of creature violence/destruction and brief language.

Tom Holkenborg, aka Junkie XL, is a Grammy nominated multi-platinum producer, musician, composer and educator whose versatility puts him on the cutting edge of contemporary music, and whose thirst for innovation is helping to reimagine the world of composition.

A Full Contact Composer, Holkenborg is hands on at every stage of the composing process, a multi-instrumentalist who combines a mastery of studio engineering, classical musical training and an innate sense of curiosity. He’s as adept working with a 50 piece philharmonic orchestra as he is with a wall of modular synths, playing a bass guitar or building his own physical and digital instruments. His drive to reimagine what’s possible and share that knowledge with the next generation of composers is what makes Holkenborg a unique force, and one of the most in-demand film composers in the world.

Tom’s film scoring credits have grossed over $2 billion at the box office and include Mad Max: Fury Road, Deadpool, Black Mass, Alita Battle Angel, Divergent, Brimstone, The Dark Tower, Tomb Raider, Terminator: Dark Fate, the record setting Sonic the Hedgehog and the forthcoming projects The 355, Justice League: The Snyder Cut, Godzilla vs Kong and Army Of The Dead. He has worked with directors including Peter Jackson, Robert Rodriguez, James Cameron, George Miller, Christopher Nolan, Zack Snyder and Tim Miller among many others.

An educator as well as a creator, Tom is committed to breaking down the barriers of entry in the world of film composition, creating the free SCORE Academy program in Los Angeles and a music composition program at the ArtEZ conservatorium in his home country of the Netherlands. On YouTube, Tom hosts his educational series StudioTime, which is available for free and has been watched millions of times.

Tom is able to draw on his extensive knowledge of classical forms and structures while keeping one finger planted firmly on the pulse of popular music. When his eclectic background is paired with his skill as a multi-instrumentalist (he plays keyboards, guitar, drums, violin, and bass) and a mastery of studio technology, a portrait emerges of an artist for whom anything is possible. Outside of his own artistry Tom’s desire to marry technology and classical composition to initiate change and evolution led him to partner with Orchestral Tools in 2019 to create Junkie XL Brass, his first sample library, making world-class sounds available to composers everywhere.

The foundation for Tom’s work in film started in his native Holland, where he created multiple film scores, before undertaking mentorships with celebrated composers Harry Gregson Williams and Hans Zimmer, with whom he worked on projects like Inception, Batman vs Superman and Dark Knight Rises. Tom’s partnership with Hans was formative, enabling him to hone his own voice and style while learning from one of Hollywood’s most influential composers. Tom’s own Hollywood journey really started to take flight in 2014 with his first major solo project, and the first of his many collaborations with Zack Snyder, 300: Rise Of An Empire. It was the beginning of a scoring schedule that has netted billions of box office dollars, included blockbusters and indie projects, seen Tom work with some of Hollywood’s most lauded directors, and kept him jam packed ever since.

Holkenborg’s music career began in 1993 when he started the industrial rock band Nerv and was also producing hardcore and metal bands like Sepultura and Fear Factory. Drawn by electronic breakbeats he started Junkie XL in 1997 debuting with the album Saturday Teenage Kick. Holkenborg went on to produce five more albums under the Junkie XL moniker while playing headline shows all over the world. In 2002 the producer remixer scored a number 1 chart hit in 24 countries with his rework of “A Little Less Conversation”. Following its success Holkenborg collaborated with celebrated artists like Dave Gahan, Robert Smith, Chuck D, and remixed artists such as Coldplay, Depeche Mode, Britney Spears, Justin Timberlake and many more. In addition Holkenborg created the music for video games like FIFA, Need For Speed, The Sims, and SSX and commercials for global campaigns like Nike, Heineken, Adidas, Cadillac and VISA.