Hero Collector Books are delighted to 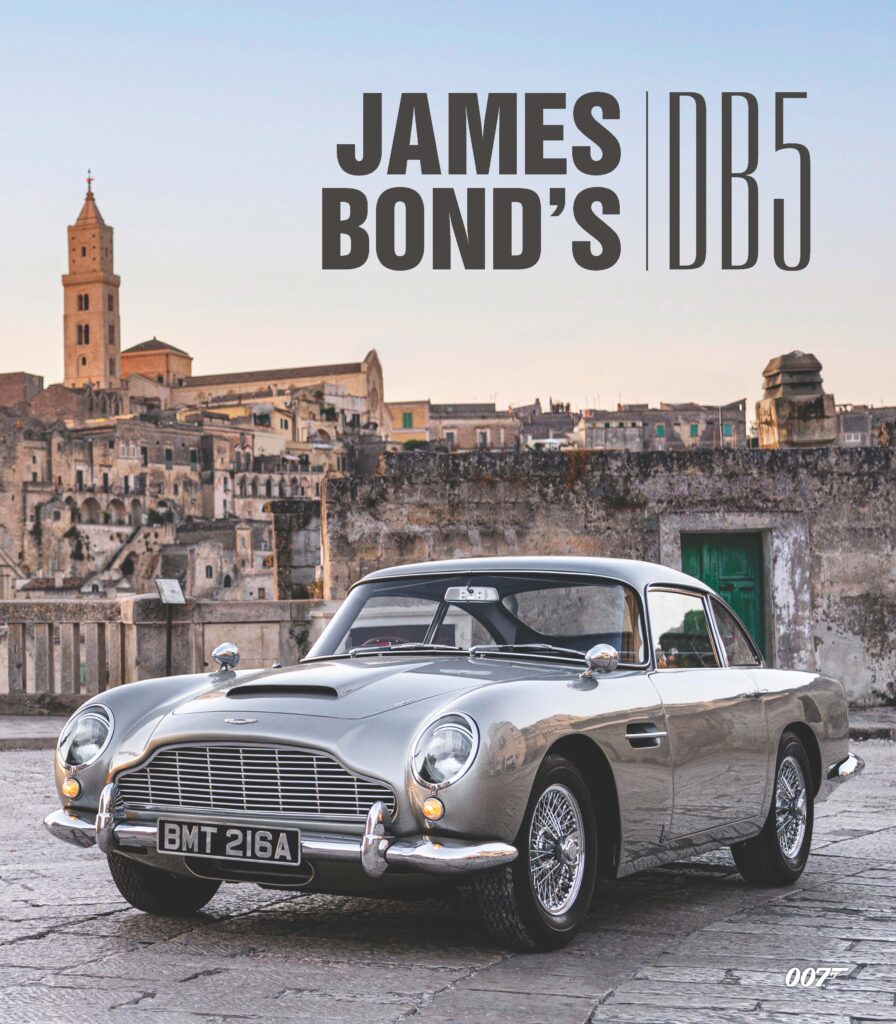 announce the release of James Bond’s DB5, the first official in-depth history of OO7’s famous Aston Martin.The book will be published on September 28th to coincide with the release of the 25th James Bond film No Time To Die, which features the DB5 prominently.

This is the first time EON Productions, the makers of the James Bond films, have authorised an official history of this iconic car, which made its debut in Goldfinger and went on to appear in another eight OO7 films. The book has been carefully researched in close collaboration with EON and Aston Martin and draws on both their archives. It includes storyboards, diagrams, design materials, and many rare and beautiful photographs that cover every detail of the car, from the over-riders to the exhaust.

As Reichman says, “There are no other cars that enjoy such an exciting connection to such a beloved character and I hope this book demonstrates that among all the technical and marketing data that underpins car production, an indelible truth remains: great cars are wonders to behold, blending creativity with one crucial factor: fun. Bond definitely enjoys the DB5. I hope you enjoy it too.”

When OO7 first took control of a specially-customised Aston Martin DB5 in 1964’s Goldfinger, it re-defined action movies forever. The car was fitted with high-tech weapons and ingenious gadgets that were the stuff of dreams, and in the years that followed, Bond and the  DB5 have become inextricably linked. The car returned in the next film, Thunderball, while replica OO7 DB5s set off on a world tour to promote the Bond movies. OO7 would drive other vehicles, but the DB5 was always the definitive Bond car. After a thirty year absence it returned to the screen in 1995’s Goldeneye, and has gone on to feature in another five Bond movies, culminating in its appearance this year in No Time To Die.

This beautiful coffee table book covers the entire story, starting with the Bond producers’ initial letters to Aston Martin before detailing the modifications made to the car for the filming of Goldfinger, including EON’s original drawings and rare pictures of the cast and crew on location in Switzerland. It goes on to explore the fascinating history of the DB5s that went out on tour, and covers every subsequent appearance of the DB5 in the Bond movies, including the inside story of how it was seemingly destroyed in Skyfall before returning in triumph in No Time To Die. Its appearance in the latest  Bond film is covered in depth, with unique photography and insider reports from the shoot in Matera, Italy.

This is the definitive book about one of the most significant and coveted cars in movie history. It is an essential part of the Bond story and a stunning addition to any library.

Will Lawrence is a freelance writer and a contributing editor on the film magazine Empire.He has written for many international newspapers, websites and magazines. He writes extensively on the Bond series, has worked closely with EON Productions on all the Daniel Craig films, and also authored the book Blood, Sweat and Bond: Behind the Scenes of Spectre.

Simon Hugo is a freelance writer and editor specialising in pop culture, in particular film and television on which he has written widely. He is also the author of several books about LEGO.

ABOUT NO TIME TO DIE

No Time To Die is the official title of the 25th James Bond adventure The film, from Albert R. Broccoli’s EON Productions, Metro Goldwyn Mayer Studios (MGM), and Universal Pictures International is directed by Cary Joji Fukunaga) and stars Daniel Craig, who returns for his fifth film as Ian Fleming’s James Bond OO7. Written by Neal Purvis & Robert Wade (Spectre, Skyfall), Cary Joji Fukunaga, and Phoebe Waller-Bridge (Killing Eve, Fleabag) The film will be released globally from November 12, 2020 in the U.K. through Universal Pictures International and in the U.S on November 20, from MGM via their United Artists Releasing banner.

In No Time To Die, Bond has left active service and is enjoying a tranquil life in Jamaica. His peace is short-lived when his old friend Felix Leiter from the CIA turns up asking for help. The mission to rescue a kidnapped scientist turns out to be far more treacherous than expected, leading Bond onto the trail of a mysterious villain armed with dangerous new technology.

EON Productions Limited and Danjaq LLC are wholly owned and controlled by the Broccoli/Wilson family. Danjaq is the US based company that co-owns, with Metro Goldwyn Mayer Studios, the copyright in the existing James Bond films and controls the right to produce future James Bond films. EON Productions, an affiliate of Danjaq, is the UK-based production company that has made the James Bond films since 1962 and together with Danjaq controls all worldwide merchandising. The twenty-fifth OO7 film is currently in post-production.

Universal Pictures International (UPI) is the international marketing and distribution division for Universal Pictures. In the United Kingdom, Ireland, Spain, Italy, Germany, Switzerland, the Netherlands, France, Russia, Korea, Australia, Mexico, Brazil, Hong Kong, India and China, UPI directly markets and distributes movies through its local offices, creating campaigns and release strategies that respond to the culture and market behaviour of those territories. In other parts of the world, UPI partners with Paramount and Sony in the distribution of all three companies’ films. Universal Pictures is part of NBCUniversal, one of the world’s leading media and entertainment companies in the development, production, and marketing of entertainment, news, and information to a global audience. NBCUniversal is a subsidiary of Comcast Corporation.

United Artists Releasing, a joint venture between Metro Goldwyn Mayer (MGM) and Annapurna Pictures. (Annapurna), is a U.S. theatrical releasing company. Built upon the legacy of the iconic United Artists motion picture studio, the joint  venture provides a home where filmmakers are supported by thoughtful approaches to marketing, publicity and distribution. United Artists Releasing offers content creators an alternative distribution option outside of the studio system and supports Annapurna and MGM’s film slates as well as the films of third-party filmmakers.