Soundwaves: The Original Score for Black Adam by Lorne Balfe is Available Now from WaterTower Music

WaterTower Music is excited to announce 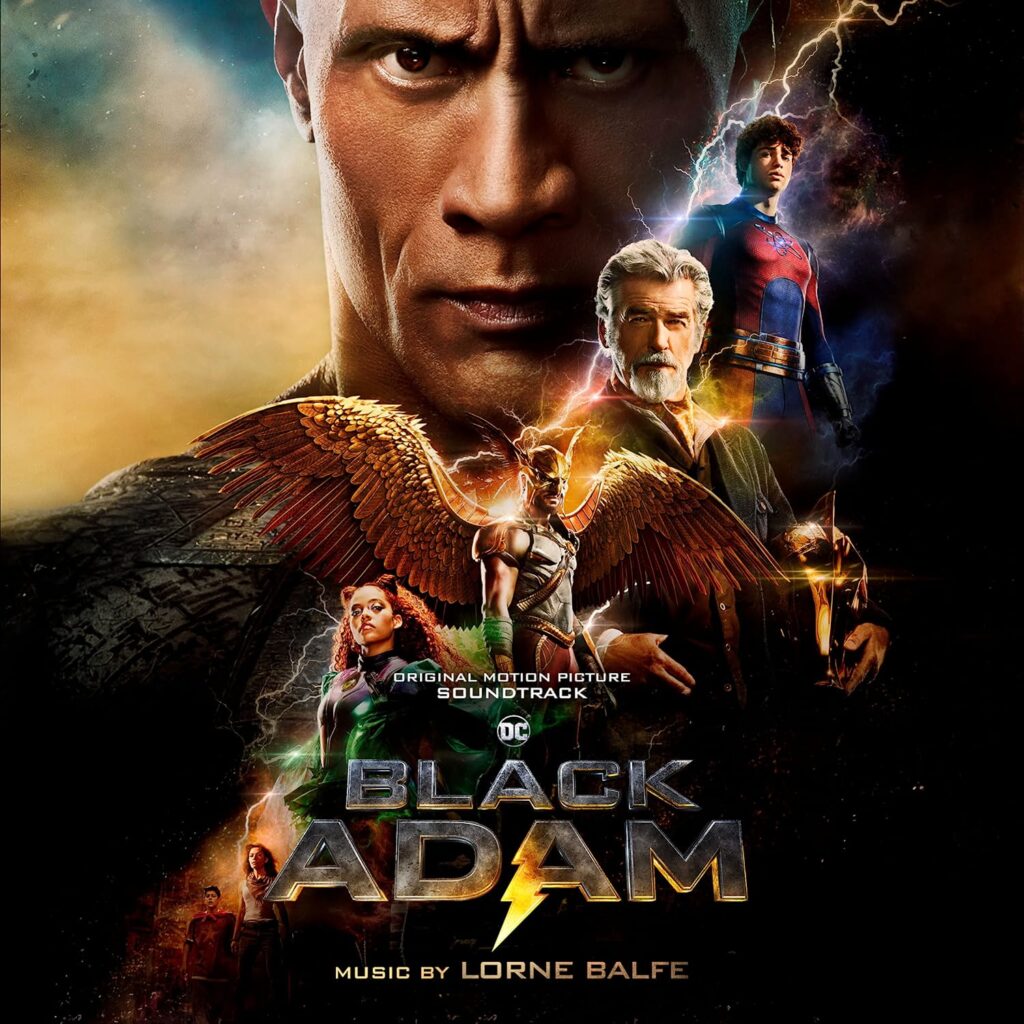 the release of the soundtrack to the upcoming New Line Cinema action adventure “Black Adam,” starring Dwayne Johnson. The first-ever feature film to explore the story of the uncompromising DC antihero comes to the big screen under the direction of Jaume Collet-Serra (“Jungle Cruise”). The 43-track Black Adam (Original Motion Picture Soundtrack) by noted Grammy Award-winning and Emmy-nominated composer Lorne Balfe (“Mission Impossible: Fallout,” “The Lego Batman Movie,” “Black Widow”) has just been released – in advance of the film. “Black Adam” smashes into theaters and IMAX internationally beginning 19 October 2022, and in North America on October 21, 2022.

Earlier this month, prior to this full soundtrack release, WaterTower Music released two of Balfe’s themes from this film, the Black Adam Theme and The Justice Society Theme. “It was exciting to get into the Black Adam theme, and I really wanted to capture his essence as the DC comic book world’s anti-hero,” explained the composer. He went on to note that “this movie is a reintroduction to to the legacy of the Justice Society and I am excited for the public to reacquaint themselves!”

Balfe further elaborated as to his overall musical and philosophical approach to Black Adam. “My goal was to get the emotion and darkness of the main characters back story across to the audience, whilst simultaneously intertwining the old themes and familiarities of the DC comic book world and introducing a new class of superheroes.” He further noted “One way to bring in the feeling of an ancient world together was to collaborate with traditional instruments from Latin America, India, Africa and the Middle East. A particular highlight for me was a percussion session I did where we enlisted several musicians playing various traditional instruments together to achieve this specific sound. Further, we had a large brass section across the score to give the weight and power of the main character’s past, which I balanced out with high tempo, more melodic sounds to give the audience that more familiar heroic feel. We also experimented a lot with choir on this project which was able to contribute a unique and classical sound that ties in nicely with Black Adam’s story.”

The Black Adam (Original Motion Picture Soundtrack) is now available for streaming and digital purchase, on CD and coming soon on vinyl via Mondo, who are excited to continue their on-going DC soundtrack series with the premiere physical release of the 43-track Black Adam (Original Motion Picture Soundtrack) on 3x 180 Gram color vinyl. Featuring artwork by Luke Preece, housed in a tri-fold jacket and pressed on 3x 180 Gram color vinyl (also available on 3x 180 Gram black vinyl), Pre-Orders begin on 10/21 at 10AM PST at MondoShop.com. The track list is as follows: 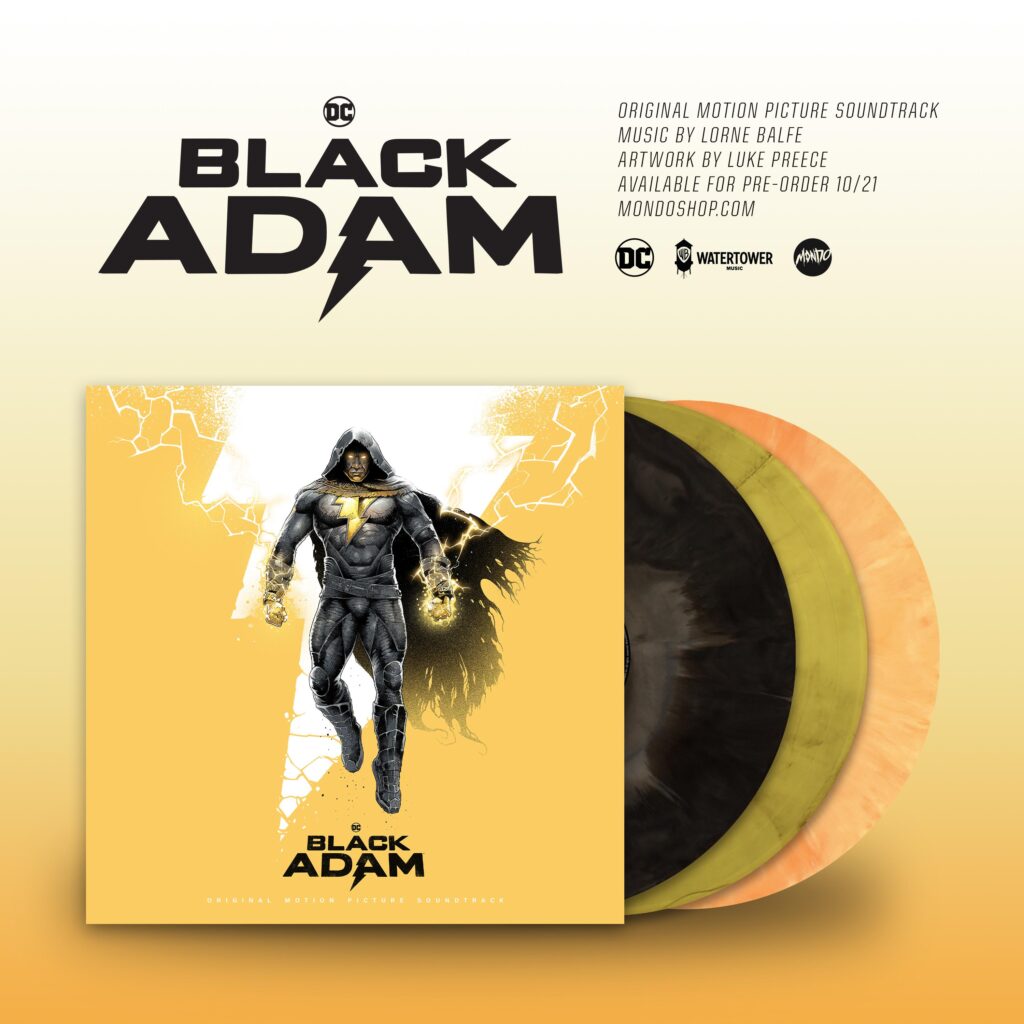 In ancient Kahndaq, the slave Teth Adam was gifted the almighty powers of the gods.  But he used those powers for vengeance and was imprisoned.  Now, 5,000 years later, he is freed and once again wields his dark sense of justice onto the world.  Refusing to surrender, Teth Adam is challenged by a team of modern-day heroes known as the Justice Society—Hawkman, Dr. Fate, Atom Smasher and Cyclone—who seek to return him to eternal captivity.

Originally from Inverness, Scotland, Lorne’s love of music and writing music was evident from an early age. His childhood home had a residential recording studio where the likes of Ozzy Osbourne and Inner Circle would record—the latter of which he serendipitously worked with for his score to BAD BOYS FOR LIFE.

As early as eight years-old, Lorne began writing and selling his composed “jingles” for advertisements,and at the age of thirteen he auditioned to be a percussionist with the Edinburgh Symphony Orchestra, becoming their youngest member, and traveled around Scotland with them professionally. It became clear to Lorne that he wanted to become a film composer and in his late teens he started writing letters to other composers in the hope of an opportunity. It was then he decided to move to the U.S., and soon his exceptional career took off.

Consistently receiving accolades for his musical compositions, he received critical acclaim for his score in the most successful film of the Mission: Impossible franchise, Writer/Director Christopher McQuarrie’s MISSION: IMPOSSIBLE – FALLOUT (Paramount Pictures) and has been announced as the composer of MISSION: IMPOSSIBLE 7 & 8.

In addition to his work with Christopher McQuarrie, Lorne has worked with many of the most prestigious directors in the industry, including Christopher Nolan, Ron Howard, Michael Bay, Cate Shortland, Ang Lee, Christophe Waltz, Jerry Bruckheimer, Sean Baker, and Chris McKay.