Last week at E3, Activision released more information about the villains in the upcoming 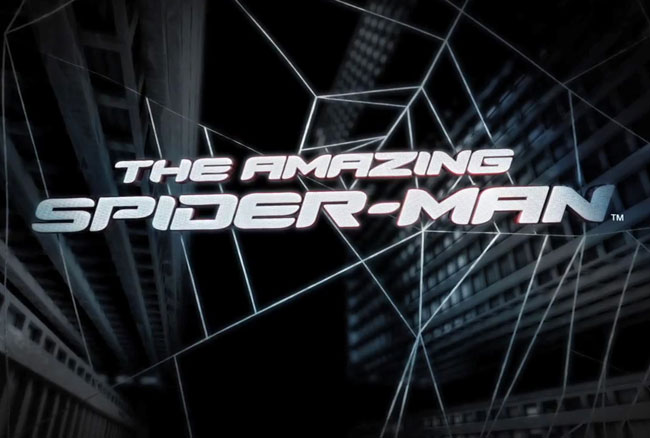 Amazing Spider-man game. Spidey goes up against some of his most vicious enemies including the Vermin, The Lizard, Scorpion and Felicia Hardy (aka Black Cat).

Along with the screen shots we have bios of the baddies…

SCORPION
Of all the cross-species facing off against Spider-Man, none features a more cold, menacing appearance than Scorpion – and for good reason. Normally reserving his genius toward his specialty in nuclear science, Oscorp physicist Dr. Otto Octavius dug into Curt Connors’ 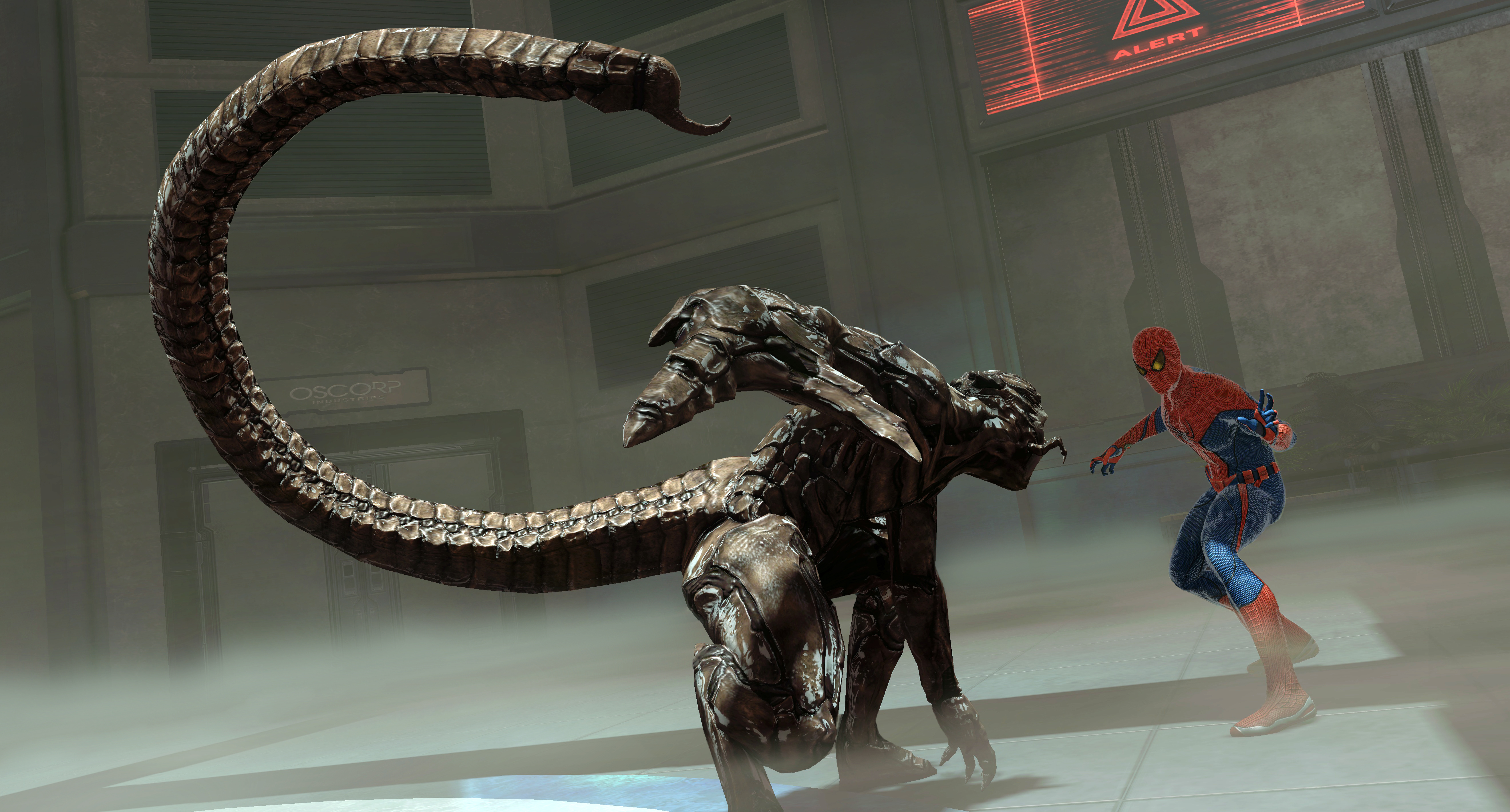 research as quickly as it became available to him. Not satisfied with simply infusing human DNA into a highly venomous black fat-tailed scorpion, Octavius also threw in a touch of a mysterious, organic “black goo” of unknown origin, which Oscorp had recently retrieved from one of the company’s fallen satellites in secret. The result was Scorpion, an experiment Octavius also would affectionately refer to as “MAC” (as in, “my astonishing creation” – he thought it was clever, anyway…).

Incredibly agile and twice as strong as Spider-Man himself, this personification of everything Alistaire Smythe aims to annihilate also boasts the ability to grab prey with one hand, then cut it in half with the pincer on the other. Scorpion’s stinger houses the most toxic venom the world has ever seen, and he has been known to project it from long distances as well. As if that weren’t lethal enough, he’s just as likely to whip victims with his tail, which itself slings freely at ninety miles per hour.

Octavius was particularly pleased with one unexpected side effect of the “extra element” he added: No other cross-species derived outside of a human subject possesses anywhere near the intellect of Scorpion. A quick glance at his stoic face reveals his instinctively 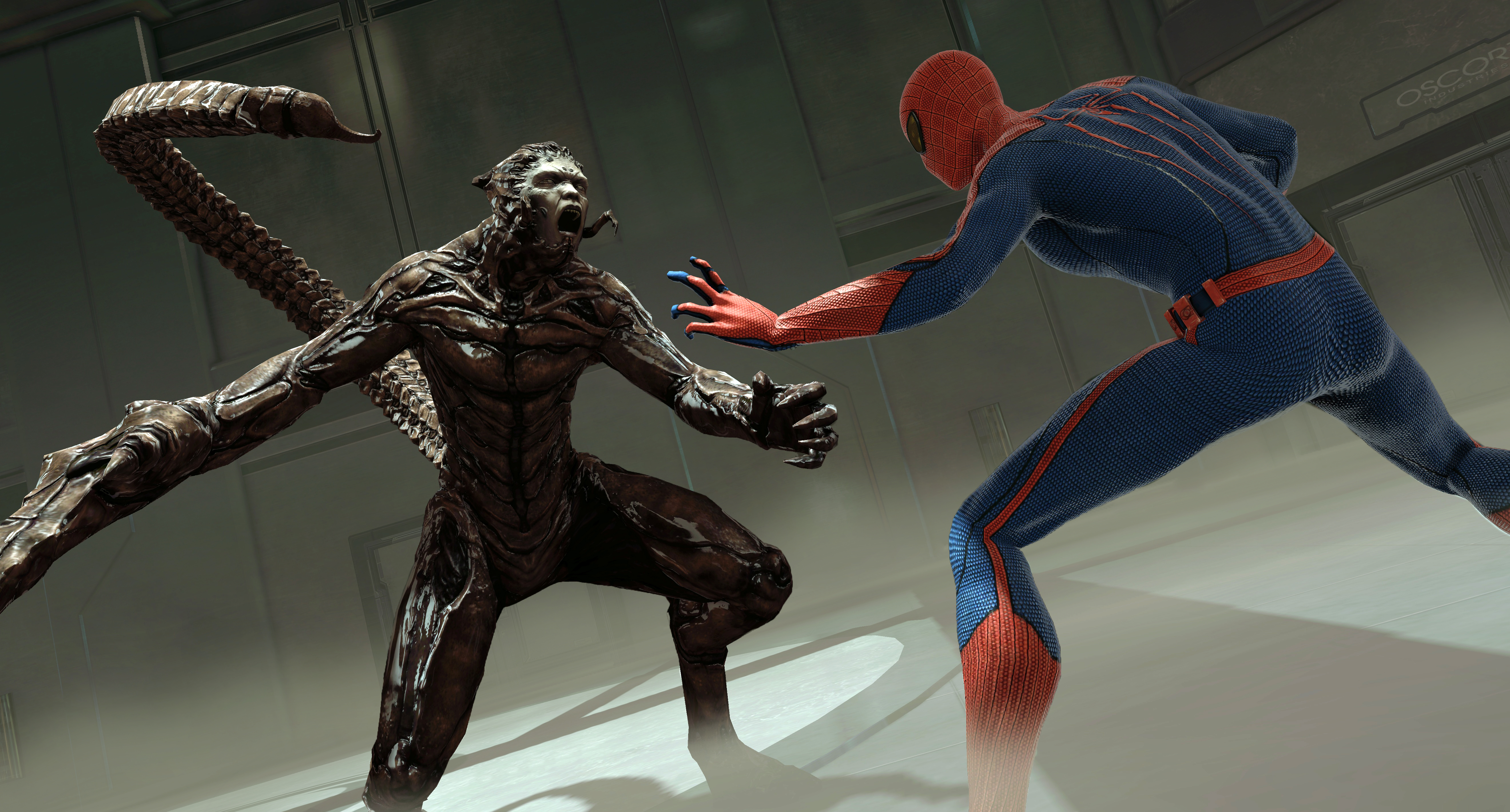 cunning nature, which in turn has prompted Scorpion to concentrate closely on – even learn, to a certain degree – human speech patterns. Though he currently “speaks” in unintelligible squeals, it seems only a matter of time before the humanity within in him surfaces fully, including at least some degree of intelligent communication with (likely soon-to-be-dead) humans.

Note: This bio is intended only as back story. Neither Dr. Otto Octavius nor the “black goo” appear in the film The Amazing Spider-Man or its videogame.

The rat crossed with human DNA known as Vermin was created entirely by accident, and with the noblest intentions.

Filling the role of professional confidant to Curt Connors since the abrupt departure of Richard Parker, Oscorp geneticist Edward Whelan kept a watchful eye on his colleague’s cross-species research. Whelan’s initial wonder and amazement gradually matured to doubt and even fear, as he pondered the possible horrific potential of Connors’ discoveries.

Soon enough, Whelan’s fears came to life in the form of the Lizard – and Whelan took it upon himself to find a cure to save his friend. Sequestered in his office for days, Whelan 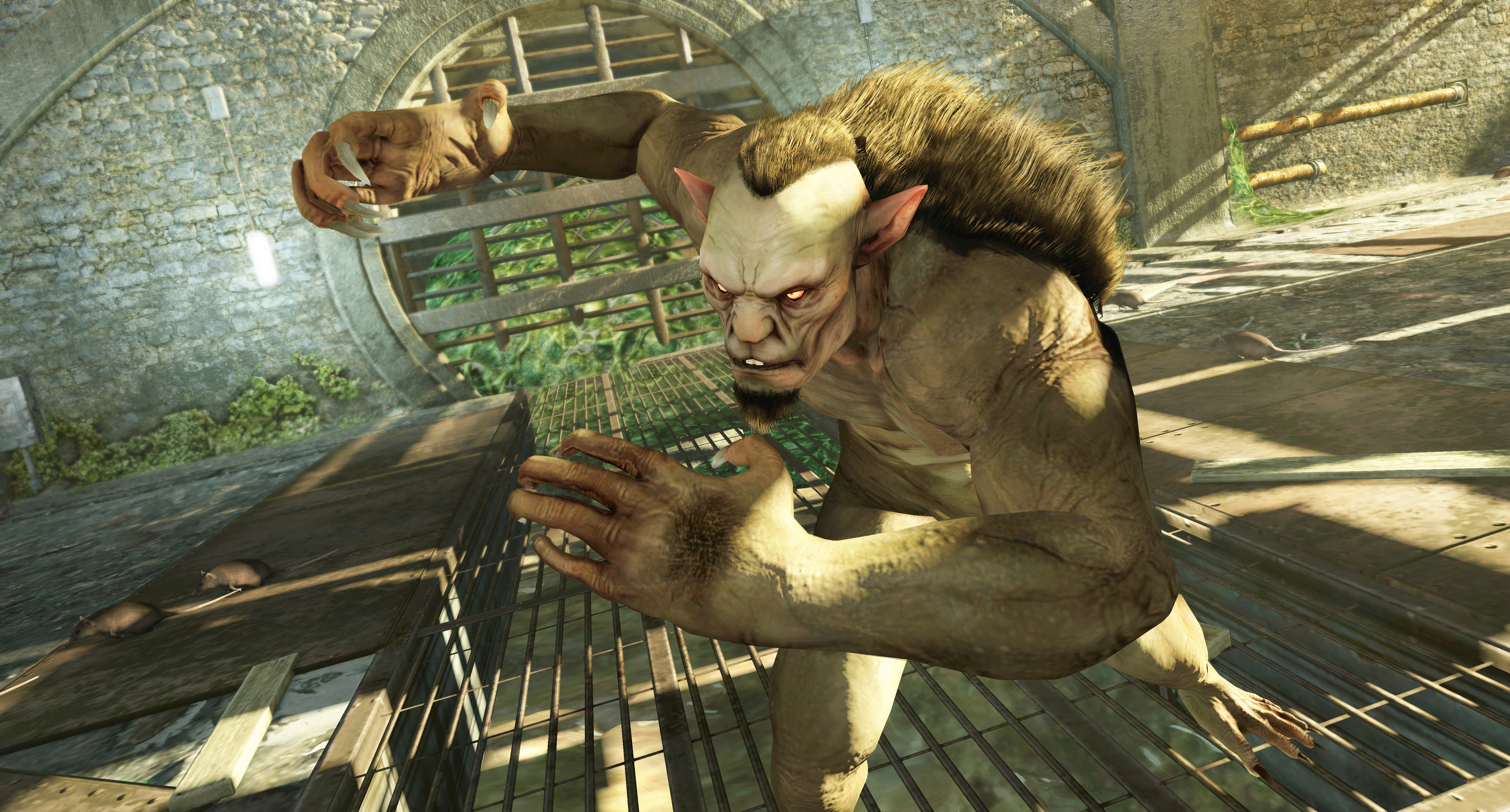 didn’t sleep for more than ninety hours, choosing not to rest until he had produced what he believed to be an antidote (which itself included the DNA of the only human around – himself). Wanting to know for sure that the antidote was safe to organic beings, Whelan injected it into a lab rat – then collapsed in his office out of sheer exhaustion. Sadly, pure mental fatigue caused Whelan’s calculations and measurements to be off – way off.

As Whelan slept the deepest sleep of his life, the injected lab rat began to grow in size. Within an hour, it was the size of a human, even adopting a newly instinctive bipedal mode of locomotion. And it was hungry. Nearby, the humanoid rat took a bite out of the closest food available – Edward Whelan.

“OWWWWWWWWWWWW!!!” screamed Whelan, now very much awake and in great pain. “You Vermin!” The ruckus summoned Oscorp security, who subdued the beast and quarantined it.

It was in the hospital, as his body began to change, that Whelan realized his greatest 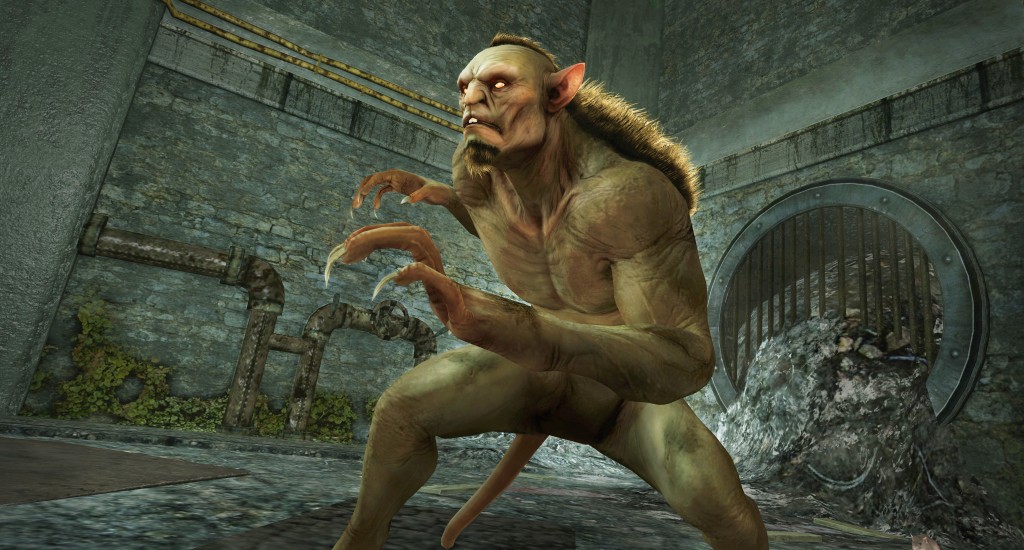 error. Fur surfaced from his pours. Claws emerged from his fingers. He was becoming a rat-like monstrosity himself. As his brain faded to mush, shortly before his instincts led him to a new home in the sewers, he recognized his mistake: “I didn’t create an antidote… I created a virus…”

Note: This bio is intended only as back story. Edward Whelan and the events concerning him appear neither in the film The Amazing Spider-Man nor its videogame.

Born in Queens, New York, to a privileged and wealthy family, Felicia Hardy led the ideal life growing up, as a popular cheerleader and respected athlete who still managed straight 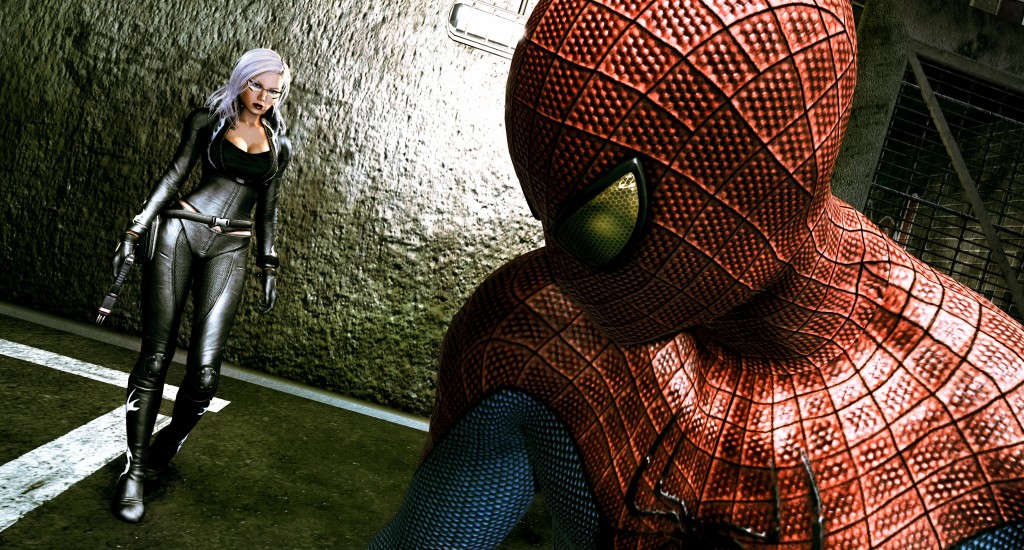 A’s in all her classes. But her family had a dark secret – the Hardy fortune was a result of her father’s career as a notorious cat burglar. Making plenty of enemies on both sides of the law, he disappeared under mysterious circumstances when Felicia graduated high school. Determined to continue his legacy – or perhaps for other, less obvious reasons – Felicia has since dedicated her life to following in her father’s footsteps.

Felicia trained for years, until she felt she was ready to become the ultimate thief. Her obsession paid off – before long, she’d find that her sharp wit and seductive allure gave her an edge over the competition, landing her in circles that even her father, a master thief, could never have hoped to breach. What’s more, after three years of consistently brilliant jobs, she still managed to elude all authorities (as well as other, less law-abiding figures on her trail). But her luck is about to change…

And last, but by no means least, we present:

The Lizard is the perfect example of science gone awry.  One could blame Dr. Curt Connors 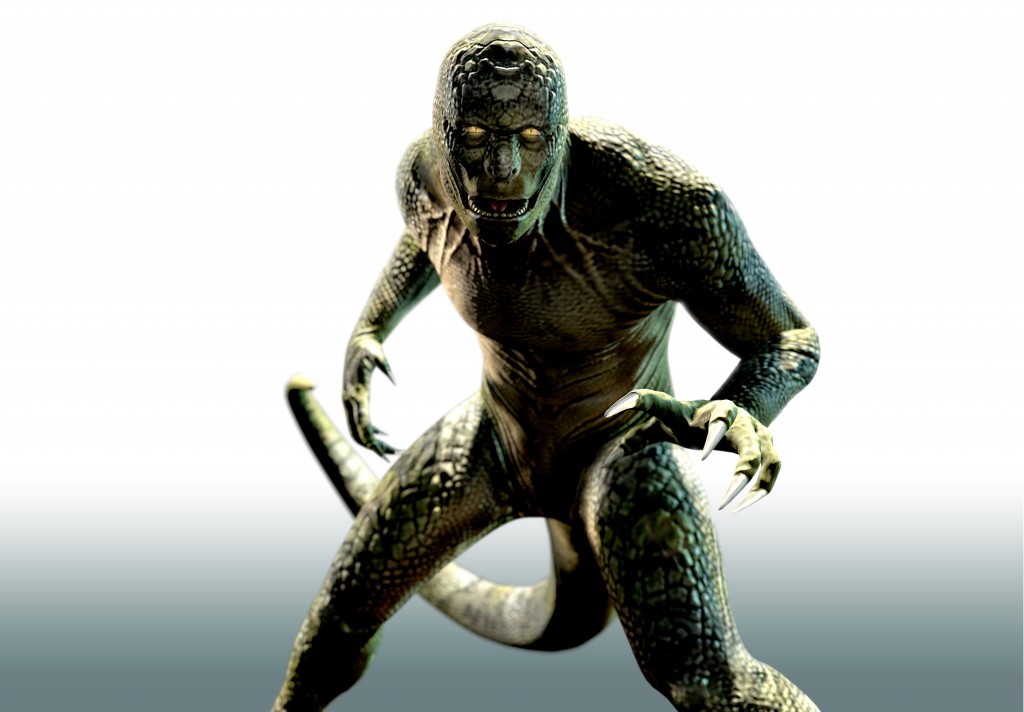 for creating the Lizard, but no one should blame him for the actions the Lizard does.  When his reptilian mind takes over, Connors loses complete control and there only remains the savage, powerful, cross-species monstrosity known as the Lizard.