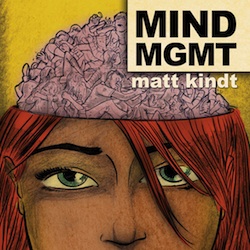 aise from fans and critics alike throughout its six-issue run! Now, Dark Horse is partnering with one of the series’ strongest supporters, leading science fiction blog io9, to bring fans an exclusive series of daily webcomic strips!

MIND MGMT follows a young journalist who stumbles onto a much bigger story than she bargained for while investigating a bizarre case of memory loss on a commercial flight. Her ensuing journey involves weaponized psychics, hypnotic advertising, talking dolphins, and seemingly immortal pursuers, as she attempts to find the flight’s missing passenger, the man who was MIND MGMT’s greatest success—and its most devastating failure. But in a world where people can rewrite reality itself, can she trust anything she sees?

The first strip launched Monday, exclusively on io9.com, with a new comic posted daily throughout the coming week!

Look in your local comic shop for MIND MGMT #0, which collects the previous digital stories and introduces the series’ key players, and delve deeper than ever into MIND MGMT’s secret history!