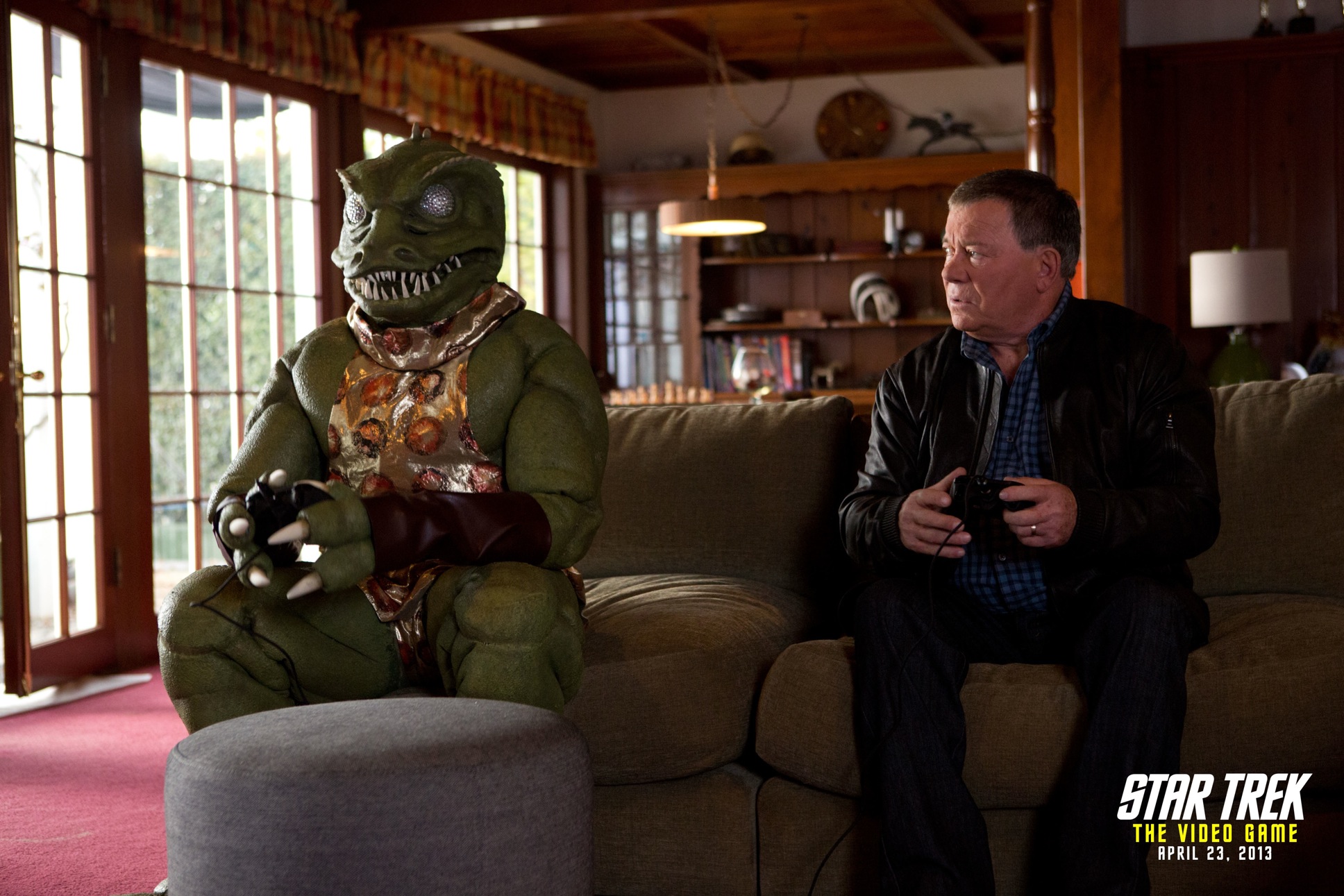 d desert planet, William Shatner comes face-to-face again with the menacing Gorn species of STAR TREK fame … but this time the battle begins on a comfy sofa with the two former foes seated in front of a video screen as they fight again in promotion for the April 23 release of STAR TREK: THE VIDEO GAME.

The original Kirk-Gorn duel was seen in the classic 1967 “Arena” episode of the STAR TREK series. Millions of people have viewed the original on YouTube at http://www.youtube.com/watch?v=4SK0cUNMnMM.

In the promotional video, which debuted Thursday exclusively on Yahoo! Movies (http://movies.yahoo.com), Shatner and a stunt man in a replica Gorn suit are seen casually playing STAR TREK: THE VIDEO GAME when a dispute leads to a friendly fight re-enacting actual choreographed punches from the classic TV brawl blow-for-blow. This time, however, couch pillows replace what appeared to be “space rocks” that were thrown the first time around.

“What better way to spotlight the adventure and fun everyone can have actually playing as Capt. Kirk in the new game, than to team up the legendary former captain himself to play one of his old foes,” commented LeeAnne Stables, President of Consumer Products at Paramount Pictures, the studio releasing the game. “Mr. Shatner is such a great sport and that Gorn had absolutely no chance of coming out on top this time.”

After spending a day on the set with the Gorn to create the video, veteran actor Shatner, who originated the role of Capt. Kirk in Star Trek: The Original Series, added: “It never ceases to amaze me how many people still ask me about that scene. It’s 46 years later, and he hasn’t aged as well as I have.”

The highly anticipated STAR TREK: THE VIDEO GAME features a vastly updated version of the Gorn as the key foe to legendary duo Kirk and Spock. Players take on the roles of Kirk and Spock, who work together to get to the heart of a mysterious attack by an enemy with unimaginable strength – a re-imagined version of the Gorn. In an entirely original story, written by BAFTA award winner Marianne Krawczyk, the Gorn is a terrifying threat, with an army that could overwhelm Kirk, Spock and the crew of the Enterprise.

The all-new video showdown between the two STAR TREK icons can also be found online at www.startrekgame.com starting today, and highlights the co-op play that is at the heart of STAR TREK: THE VIDEO GAME, which will be available for Xbox 360, Playstation 3 and PC. Pre-ordering is available now.

The promotional video was produced in-house under the creative direction of Senior Vice President Brian Miller and shot on location in a ranch-style home in suburban Los Angeles.

STAR TREK The Video Game is under license by CBS Consumer Products and will be released April 23 in North America and April 26 worldwide by Paramount Pictures and NAMCO Bandai Games.