There are always those movies, or books that leave a person in a 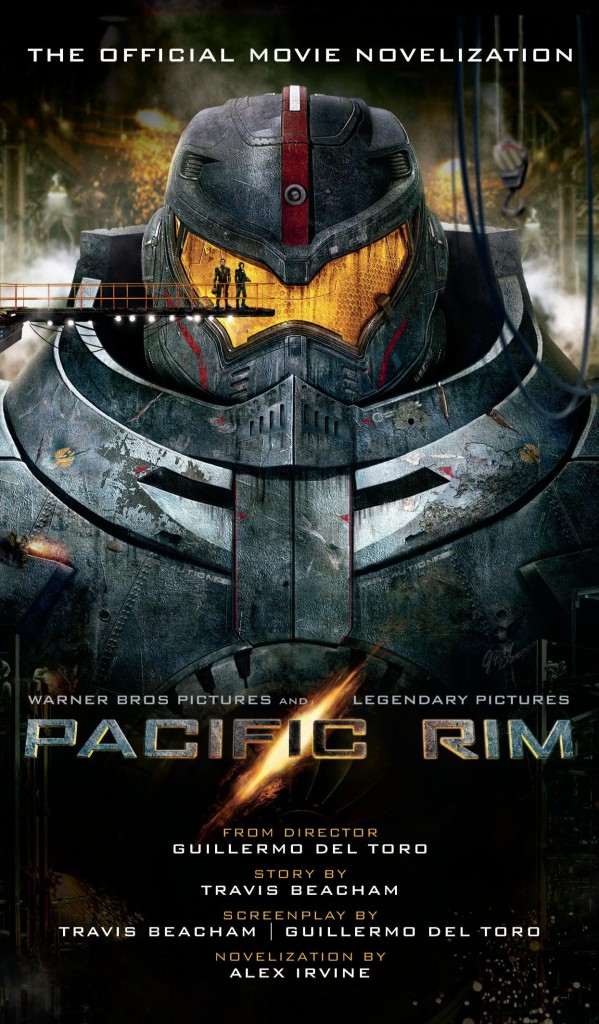 we when the final screen fades to black, or the final page is turned over. Pacific Rim is one of those.

The novelization of Pacific Rim (published by Titan Books) follows the life of Ranger Raleigh Becket, a Jaeger pilot (giant mechs)  in the battle with Earth’s fiercest enemy, the Kaiju (giant monsters). He and ranger trainee, Mako Mori, are the last hope for an end to the Kaiju destruction.

The story takes place inside and out of the characters’ minds as Raleigh, Mako and their fellow rangers and collaborators of scientists and engineers all work towards the same goal, to fight and eliminate the Kaiju, a race of silicone based life forms that are created with the specific purpose of destroying our world. These creatures arrive from a rift in the Pacific Ocean floor. When one of them surfaces it is all humanity can do to prevent the utter destruction of the city that each Kaiju targets.

In 2013 when the Kaiju first started appearing, the only way to destroy them was with nuclear missiles. It was soon realized that a better way of battling these monsters would have to be found, before we nuked earth to death. Much like the spirit of Americans after 9/11, strength and resiliency are the driving factors of the people of the world. That is how the Jaeger program was created.

“Today, on the edge of hope, at the end of time, we have chosen to believe… not only in ourselves, but in each other; to depend on each other. Today, not a man or woman in here now stands alone. Today will be the day they tell stories about. The day we face monsters at our door. We take the fight to them.”

“Today we are cancelling the apocalypse.”- Stacker Pentecost

Raleigh, and his brother are both jaeger pilots, rangers; during a battle with a Kaiju, Yancy is killed and Raleigh is left with the stinging pain and memory of what happened. In order to pilot a jaeger bot, two or more people have to go into a “neural handshake” or “drift” as the rangers call it. This combines two minds into one, nothing to hide, and everything to feel and know about the other. This includes emotions, memories, pain, joy, and so on. After Yancy’s death Raleigh is reluctant to drift with anyone else and leaves the program.

Five years later, Raleigh is visited by Marshal Pentecost, director of the Jaeger program. He convinces Raleigh to come back. The new worry for everyone is who could be Raleigh’s new drift partner. (The Drift is the mental bond that the two Jaeger share) This comes… reluctantly, in the form of Mako Mori, Pentecost’s protégée. By now the Kaiju have been getting bigger, stronger, and smarter. A new offensive plan is formed, but everyone wonders if Raleigh and Mako will be able to put the past behind them; or will they sabotage everything that has been built up to this point?

The beginning of the book is gripping but slow in the process of getting to know the characters. This is necessary to fully immerse the reader into the plot and the lives of the characters. Each person has their own story to tell and when minds are fusing together, knowing someone else’s story is VERY important. Everyone in the Jaeger program is close, from working together, fighting together, and depending on one another, there is nothing to hide when the drift begins. Every motive and choice that is made is clear when the characters are well thought out, as they are in this book. When the action starts, it doesn’t stop and fulfills all hopes of excitement and action as one could hope for.

The story, by Travis Beacham is well thought out and strategically planned to bring the best ending. Alex Irvine did a fine job of putting together the movie novelization. I personally enjoyed the excerpts of personal files and news clippings that gave preview to what was happening in the next chapter. There is no doubt that the movie will live up to expectations to provide an exciting science fiction, full of action and adventure.

Published by Titan Books and was nominated as Independent Publisher of the Year 2011. They have a rapidly growing line of science fiction, fantasy, horror, steampunk, and crime, also high quality film, TV and gaming tie ins.